Whew, I'm tired. We spent today going through our three hives. It was the first full inspection we've done since April. Everything seem...

Whew, I’m tired. We spent today going through our three hives. It was the first full inspection we’ve done since April. Everything seems to be going well in Veronica. She has lots of brood, larvae, and eggs. Midge we’re worried about. She has fewer brood cells, not much larvae, and no eggs. We never did see the queen bee, But we did spot her two weeks ago; perhaps we just missed her today.

However, there were many queen cells in Midge, and some were capped—you can see two in the photo at right (click the photo to see a larger image). One looks like a queen has emerged. Does this mean Midge is about to swarm again? Or perhaps she’s swarmed and we missed it?  Or this queen cell could be left over from when she swarmed this spring.

Califia is a strong hive and has filled the top bar hive with brood and honey. She’s also kind of testy, and more defensive than the other two hives. She tries to chase us away whenever we are near the hives; she gets positively riled into a blue rage when we open her up. Perhaps naming her after an Amazonian warrior queen was not such a good idea.

Actually, all the girls were unhappy with us today, and stung skin, gloves, and suits numerous times. But we were tearing apart the hives, so we did deserve it. And we stole—I mean, harvested—honey. Lots of honey, and each frame has honey of a different flavor. Yum. 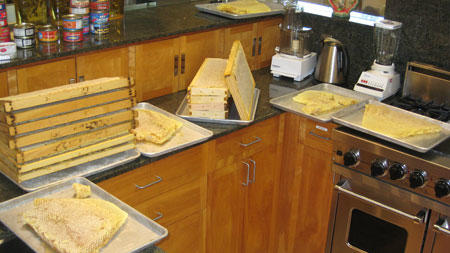