Team Bad Skunks is a group of food exchangers in Los Angeles, near Highland Park, who like to have fun. Everyone in the group grows food—... 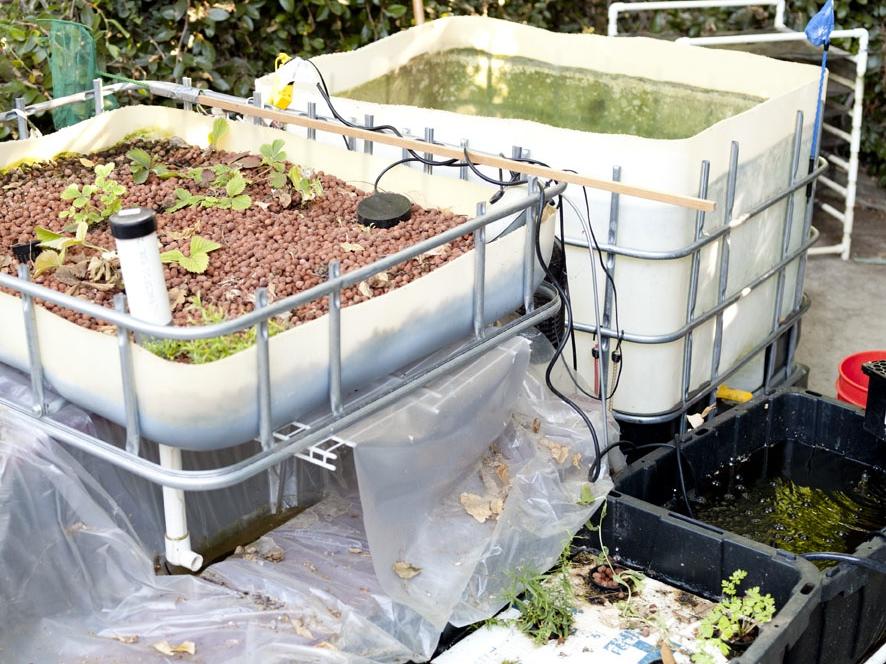 Team Bad Skunks is a group of food exchangers in Los Angeles, near Highland Park, who like to have fun. Everyone in the group grows food—interesting things like nopal cactus, loquats, and burdock along with standbys like beans and peppers, as well as lots and lots of fruit. Team leader Max Wong, who has a fun blog of her own, raises bees and makes preserves from produce her neighbors forage from the area and bring to her. Then she delivers the jars to them as thanks. “It was a cinch to convince them that a summer’s-end block party  challenge was a good idea,” says Max. “Who doesn’t need another excuse to have a party?” This post catches up with the team on the day of their end-of-summer feast in early September, the final event in this year’s One-Block Party contest. 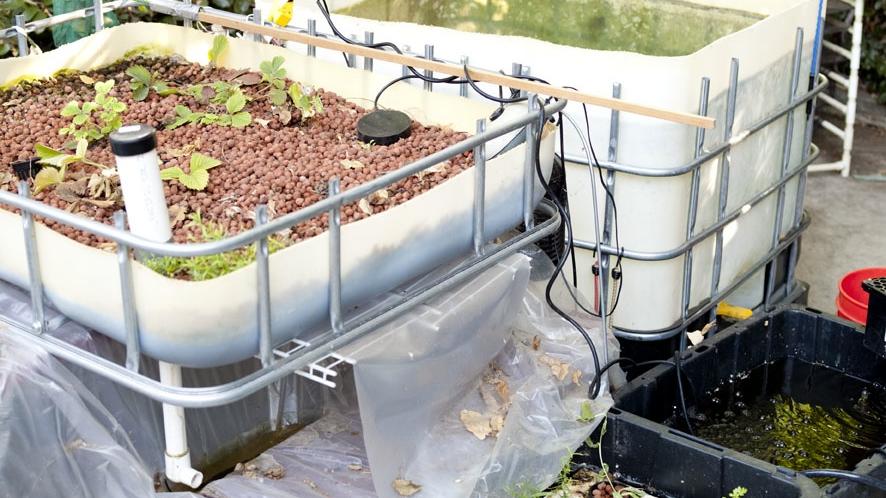 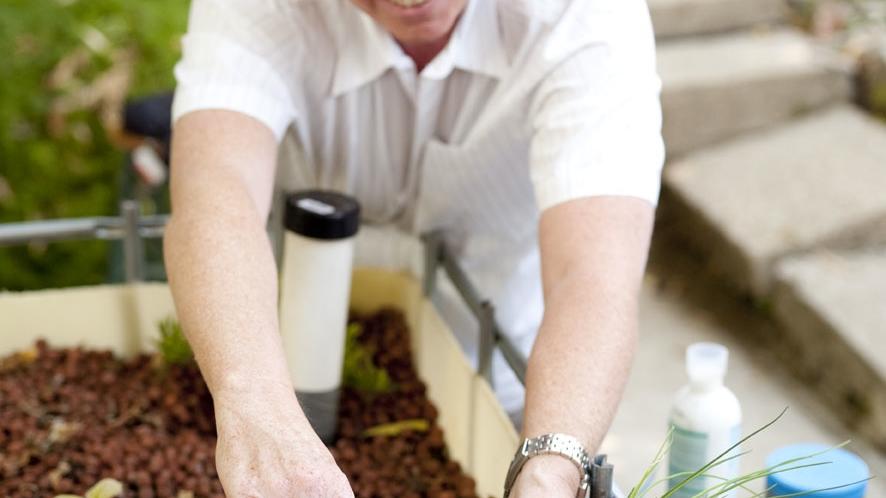 Now that Tino had harvested and processed the prawns, I started out the day by seeing what the garden had to offer. I knew there would be a few things I could count on: tomatoes, squash, Japanese eggplant, and several different herbs.

But I was surprised by a few other goodies that I thought were done for the year. I found three Japanese cucumbers, a handful of jalapeños, two poblano chiles, and a few shiitake mushrooms from our mushroom stump. Score!

Normally, I would be pretty stoked with this haul. But this isn’t any normal day. This is a competition, and well…we wanna win. Time to step it up.

With my long picking pole in hand, I went around to the other team members to see what they were willing to contribute for today’s feast. I walked away with grapefruit, avocados, oranges, lemons, and limes. Sweet.

Collective citrus—plus the urban papaya that Max stalked to get fruit for
our green papaya salad.

By Jason Kessler for Sunset

When I exited the freeway into the Highland Park/Mt. Washington neighborhood, I couldn’t believe there was a Sunset One-Block Party happening anywhere nearby. I passed liquor store after liquor store, check-cashing facilities, auto body shops, and low-cost grocery stores. This area is well-known for its vicious Latino street gang called The Avenues, so named for the street nomenclature: Avenue 50, Avenue 62, etc. It is certainly not a neighborhood known for its urban homesteading.

That’s what was so amazing about this party. The block where team leader Max lives is like a Sunset magazine oasis in the midst of a completely different culture.

The party was to take place at Max’s house, and its real centerpiece is the backyard. Max and her boyfriend, Steve, told me that they bought “a yard with a house attached,” and when you walk into that yard, the first thing you hear is the burbling of a little stream that leads to a koi pond. Along the back wall are five honeybee colonies. Max sells the honey at local farmers’ markets under the label “Sticky Acres.” She also uses it to trade with her neighbors for various goods like ducks and chickens (both of which will be on the table today).

Steve and the hives.

Not only that, Max is a beekeeping mentor for the local Backwards Beekeepers Club and helps capture wild swarms in the area. Interestingly, a wild swarm landed on their loquat tree earlier today (they took off again little while later). Maybe bees are just drawn to Max.

Max told me that she keeps hearing people say, “You can’t feed a family on a victory garden.” Her response is always, “Well, yes you can, if you share with your neighbors. … In an urban space, you can grow a huge amount of food if you team up.”

Together the team grew 18 varieties of tomatoes. Photos: Andrea Gómez.

Max met her future teammates through her “jam fairy” project, an extension of the Hillside Produce coop, which helps neighbors swap excess fruit. Her goal was to find neighbors who would donate fruit; then she’d return their fruit to them in jam form. Sean, a first generation Iranian-American and magazine editor, gave Max picking rights to his figs, lemons, sour tangerines, pineapple guavas, pomegranates, and raspberries.Tino and Kristin, who pitched in too, have lived in Mt. Washington for nine years. Because their garden did so well, their produce is front and center at today’s party. Noel and Sonita are English. Noel does all the gardening and Sonita does the tasting. They moved to Mt. Washington in 2008, “before it was cool,” says Sonita. When they moved in, their yard was covered over with concrete, which Noel jackhammered away. Now they grow tomatoes, corn, watermelon, peas, greens, two types of collards, beets, onions, garlic, celery, fruit trees, and beans.

Steve gets the carbonator ready to fizz up homemade
citrus soda.

While waiting for the rest of the Bad Skunks to show up, Steve served a tart, refreshing citrus-mint soda, made with lemons, oranges, mint and water fizzed by a penguin-shaped SodaStream carbonator. They served the drinks in tumblers from now-defunct bars like the Polynesian Palace in Waikiki.

Max gathered a huge bucketful of green tomatoes and then fried them up, using a Cajun spice blend, a bit of flour, and baking powder.

Max cooks on a Wedgewood stove from the forties.
“It’s like having a classic car in your kitchen,” she says.

As soon as the rest of the guests arrived, the evening’s bounty was set out on a small wooden table in the backyard under a hanging lantern. Sean’s father, Massud, made the coucou, a traditional Persian dish of mixed greens and eggs. The greens today included romaine lettuce, bok choy, swiss chard, parsley, green onions, and dandelion greens. It bakes for something like six hours, and ends up looking like extremely dark cornbread, with a bright green interior and a mild yet verdant taste.

Sonita and Noel dig in. The coucou is in the large frying pan.
Photo: Andrea Gómez

Then the bugs descended, and we moved dinner inside. The main courses were duck from nearby City Farm, roasted with rosemary and salt-preserved tangerines (made using Sunset’s salt-preserved lemon recipe) until extremely tender, with wonderfully crispy skin. We had a City Farm chicken, too, roasted beer-can style using a local beer called Solidarity from Eagle Rock Brewery to steam it from the inside. Alongside were greens sauteed in the duck’s fat, plus jams and homemade pickles (the chipotle loquat jam was a big hit).

Also in the protein category: those laboriously raised Malaysian prawns. The big ones were sautéed with barbecue sauce, and the smaller ones were cured in lime juice and seasonings and added to a green papaya salad. That tart-sweet, crunchy salad was my favorite dish of the night.

Other salads included a three-tomato with oregano, chiles, and garlic; tomato and cucumber, with a simple vinaigrette; and grapefruit and avocado salad. For a mid-meal amuse bouche we had disks of Japanese eggplant topped with chopped shiitake mushrooms.

For dessert, we had gazpacho popsicles, slightly sweetened with honey and herbed up with mint, that felt worthy of Willy Wonka. The fig newtons that Max wanted to make didn’t work out—it was too hot for the dough to set—so she made buttery thumbprint cookies instead.

As jazz floated out of hidden speakers, the group enjoyed the (literal) fruits of their labors and shared tales of their gardening triumphs and mishaps. When it was time to leave, I was hesitant to say goodbye. They had the kind of community spirit you usually only read about in magazines like Sunset.

RECIPES FROM THE PARTY

You will need 2 sterilized wide-mouth pint jars or 1 wide-mouth quart jar to make this recipe. For a good primer on how to sterilize (and, for that matter, all things to do with canning), see the National Center for Home Food Preservation website (ncfp.ugs.edu)

Evenly distribute the green tomatoes, jalapeños, cumin seeds, peppercorns, celery seed, dill seed and garlic in the jars, packing the tomatoes in as tightly as you can. In a saucepan, bring to a boil 1 cup of water, the vinegar, and sea salt. Pour the boiling vinegar mixture into the jars, leaving 1/2 in. of headspace. Cover with lid and fasten with rings. Allow to cool and then refrigerate overnight. They will last for 1 month in the refrigerator.

Alternatively, you can place the covered jars in a canning pot or stockpot and process the jars in boiling water for 15 minutes. Remove the jars with tongs and then allow to cool overnight. If you are processing this way, make sure that your lids have never been used before, as they will only seal once. These jars will not require refrigeration until after opening.

This recipe is from from Sean’s father, Massud. Coucou is essentially an omelet, but unlike regular omelets it cooks long and slow. Be ready to spend a few hours preparing it. Also, you can use other greens instead of dandelion and mint, but romaine lettuce leaves, parsley, and green-onion greens should be dominant.

1. In a food processor, chop and blend all the greens. Be careful not to chop them to a pulp.This is very important. Originally the vegetables used to be chopped by hand so tiny pieces of leaves remained visible.

2. In a large bowl, mix flour, turmeric, salt, and pepper. Mix these very well. Then break in 2 eggs and blend in well. Break in the rest of the eggs and again blend well.

3. Add the chopped greens and mix well. Your mixture should be a very heavy, slow-flowing soup.

4. Heat oil in a large frying pan over low heat. Pour in egg mixture. After 30 to 40 minutes, lift a corner with a flat spatula to see if it is solid. If it is, cut the omelet into pie-shaped wedges and try to turn them piece by piece. Drizzle oil around wedges so they do not burn, and keep cooking until solid.