By Sara Schneider, Sunset wine editor I don’t know how winemakers get any sleep in the fall, what with worrying about birthing t... 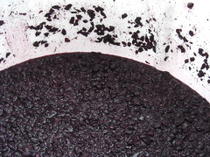 I don’t know how winemakers get any sleep in the fall, what with worrying about birthing their wine—because it’s alive. I’ve never realized before what a seething mass of molecular interaction and chemical processes a vat of juice turning to wine is.

Things happen, whether you act or not: Color and flavor compounds start leaching out of the skins and seeds, and you have to decide whether you want to maximize or minimize that. Bacteria can start growing; how do you control something you can’t see?

I woke up in a panic at 3:00 in the morning three days into cold-soaking our Syrah (holding off fermentation to extract color and flavor before there’s alcohol in the formula), sure that we’d gone too far—that the breezeway where our drums of wine were are just too warm, and we were either going to end up with an over-the-top fruit bomb, or a stinky mess from bacteria that took it south. And then there was that e-mail I got from a friend, forwarding a winemaker’s opinion that cold-soaking in general destroys any chance of capturing terroir in a wine. Too late!

So we inoculated it the next day with yeast to get our fermentation off the ground. Simpler than making bread! You just sprinkle the granules into warm water to wake them up, then drizzle the slurry over your must.Our mentor Dan Brenzel’s advice was to not stir it in immediately, considering that we had doused the vats earlier with sulfur dioxide. What was meant to discourage bacteria could also kill yeast; we needed to let it acclimate. But as soon as the yeast began eating the sugars in the top layer of must (fermenting, in other words), we mixed it in.

Then, as the carbon dioxide created by the process began pushing the skins and seeds to the top, we started a regimen of punch downs to keep that cap from drying out (which can launch a whole new ecosystem of unwanted microbes) and to extract more color and flavor. 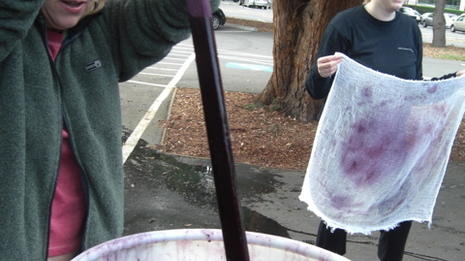 Nothing’s simple, though. Punching down the cap is straightforward enough, but how many times a day do you do it?Is your fermentation generating enough heat to extract a healthy amount of whatever it is you want from those skins and seeds, but not too much? More lost sleep.

And as it turned out, our fermentation was agonizingly slow. We measured the sugars daily, looking for them to drop from a starting point of 27 degrees Brix to zero, but they just inched down—24, 21, 19 … And we were a week into this. Convinced that the breezeway was just too cool (even though it had seemed too warm while we were trying to cold-soak), we moved our vats into the building and turned up the heat in that corner. Better—our fermentation temperature hit almost 80 degrees.

And in the middle of this primary fermentation, we had to think of another—the malolactic fermentation that red wine (and some white) needs to go through to change its harsh malic acid into softer lactic acid.

To start that, we made another run to the winemaking shop for some ML “bugs,” or bacteria. Strange, adding bacteria to our wine when we’d gone to great lengths to keep bacteria from growing in it until now. Some are good; some are bad …

In the end, it was a good two weeks before our sugars were down to 1 degree Brix. The malolactic fermentation was still raging, but that could finish in the carboys. Time to press.