by Elizabeth Jardina, Sunset researcher Finally, finally ... an egg! There it is, right in the center. (The larger brown egg at the ... 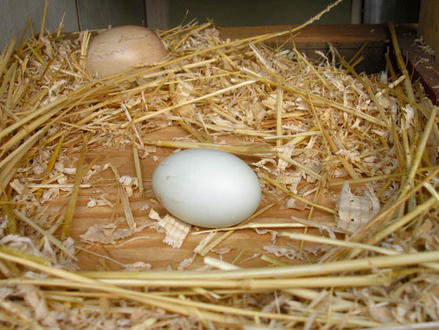 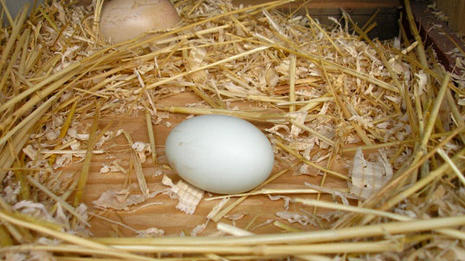 There it is, right in the center. (The larger brown egg at the back is our decoy egg, a marble egg we put in there on Friday because we were worried that the chickies wouldn’t know where to lay.) And the color is pretty accurate; that beautiful blue oval was laid by our own Ameraucana Ophelia (formerly: Kevin).

What a relief — egg fever had hit pretty hard here at Sunset headquarters.

Actually, egg fever had just hit me. But I was itching for eggs. Restless. Desperate. Every time I went to the coop, I ended our interaction with: “Lay me an egg.” And I tried to make it sound stern, like it was an egg, or else, the frying pan. (Actually, our chickens are layers only, and they’ll never face the frying pan.)

Browsing the forums at BackyardChickens.com just made me antsier. I discovered that our 21- and 22-week-old girlswere just about the right age to start laying. Plus, their combs weregetting bigger and pinker. The combs of egg layers are supposed to turn juicy red, like a raspberry. Sunset EggWatch 2008 was on. 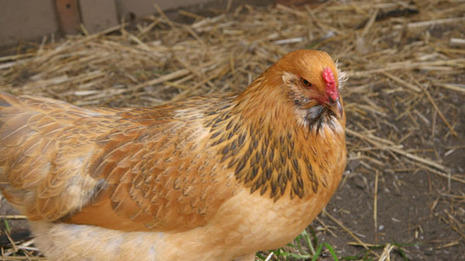 Then, on Thursday, Ophelia did the “squat.”

Here’s the deal with the egg squat: It’s the surest sign that your girls are getting ready to become, ahem, grown-lady chickens. I tried to pet Ophelia, and instead of dodging my hand, like she usually does, she crouched under my hand, threw her wings back, and stood very still, letting me stroke her back. This was highly unusual behavior; Ophelia typically flees from petting.

At that point, I started going to the coop twice a day.

I came to the office on Saturday, just to check. She was hanging out in the nesting box. Close …! We were so close!

On Sunday, I got the call from Alan Phinney, our managing editor. An egg had landed! I rushed to the office, where I met my fellow member of Team Chicken, food editor Margo True, and we made googly, aww-ing noises over it for several minutes.

The bliss of our first egg!

But that was nothing compared to the excitement of today. I went to to the coop this morning at 11:30 to check on the ladies. Ophelia, our quietest girl, was making some raspy clucking announcements like she had something to say. I hung around and watched her trot into and out of the house. Alana, her fellow Ameraucana, followed her, jumping up onto the roost and clucking. Ophelia jumped up into the nesting box, then out onto the roost and then back into the box. Keeping an eye on me the whole time, she started rustling around in the box. I stayed very still, hoping she’d forget I was there.

She made a distinct “Cluck, cluck” noise and then she was quiet. I watched her head as she opened her beak and then closed it. Then she was very still. I tiptoed around to the back of the coop and opened the door to the nesting box: 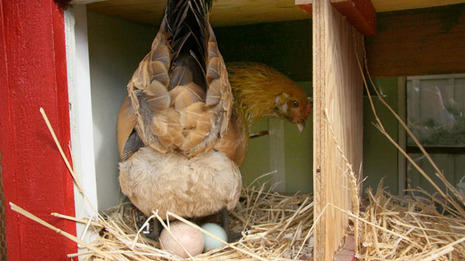 Another egg! (Again, that big brown thing is our decoy egg.)

Then she hopped out, and I snatched the still-warm oval to bring inside and show off. Miraculous. I felt as plum-proud as if I’d laid the silly thing myself.

Ophelia, who seems to be our only girl who’s laying so far, is producing petite blue eggs; the first was 1.5 ounces, the second was 1.6 ounces. Under USDA guidelines, that would qualify them as “small.” (They do seem really small, especially if you’re used to buying Extra Large or Jumbo eggs from the grocery store.) They’ll get bigger as she matures.

Tomorrow: What will we do with the eggs? A tiny, tiny omelet? (Maybe.)