Got some random odds and ends around the kitchen? You might have the makings of a meze! 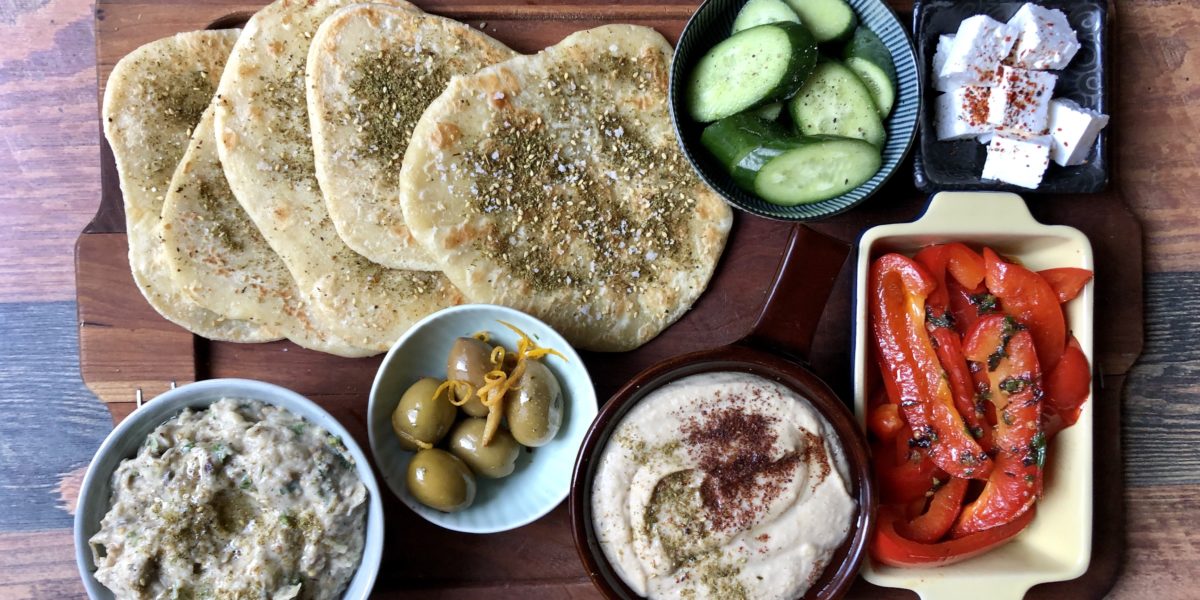 I love how a healthy meze — or a smorgasbord of salads, breads, dips, and appetizers — gives me an excuse to consume approximately a gallon of olive oil in a single sitting. Here’s how I cobbled one together from the random crap I had in my pantry and fridge.

Flatbread: Making your own flatbread is deceptively easy (we have a great recipe right here) — or you can just warm up some store-bought lavash or naan, smear them with butter, ghee, or olive oil as they come off the griddle, and then hit them with a fat pinch of zata’ar and salt.

Cucumbers: Just slice them. Add a sprinkle of salt and pepper if you want to be fancy. Sliced tomatoes would also be cool here.

Feta: I’ve had a lump of it swishing around in its salty whey for the past couple months and it smelled fine so I cubed it and gave it a drizzle of olive oil and a sprinkle of Aleppo pepper.

Peppers: If you have a red, yellow, or orange bell pepper (but not a green one — for chrissakes, let the poor thing ripen first!) you can either roast them with eggplant (here’s how to make your own roasted red peppers) or just slice them into 1″-thick strips, sauté them in olive oil, then give them a squirt of lemon juice and a good pinch of chopped fresh herbs like parsley and mint.

Hummus: I always keep various dried beans around the kitchen— since I have a pressure cooker and can cook them in about a half-hour they’re just a pantry staple. You can also use canned beans — even if you don’t have garbanzos, pretty much any white bean will work. Our sumac hummus recipe is nearly identical to what I did, though I didn’t follow a recipe (as a Portland native who came of age in hippie potlucks of the 1990s, I can make hummus in my sleep).

Olives: We all have the weird olive jar with just like four or five olives floating in that brine, plaintively, wondering why we allow them to take up such refrigerator real estate. Let’s allow these orbicular fruit-ghosts to finally ascend to the next plane. It really doesn’t matter what kind they are (these are Greek chalkidiki olives from Trader Joe’s) — warm them up for a minute with a strip of lemon zest and a crushed clove of garlic.

Baba Ganouj: Pull the eggplant that’s been kicking around the bottom of your veggie drawer — cut it in half lengthwise, rub it all over with oil, then roast at 375° (cut side down) for about a half-hour, or until it flinches against the pressure of a fingertip. Scoop out the soft flesh and mash it in a bowl with a clove or two of crushed garlic (or roasted, if you have it), a couple tablespoons of tahini, a glug of olive oil (a glug is a very scientifically precise volume that comes from pouring for two whole seconds), the juice of half a lemon, and a couple pinches of salt. Add some chopped parsley if you like!

That’s it! This meze will provide a meal for three or four people, plus a few days’ snacks (unless you’re the kind of person who can crush two cups of hummus in a sitting).

These 5 Modern Israeli Recipes Go Way Beyond Falafel and Hummus

Aromatic flatbreads from the grill