Crop failure: One of the girls gets sick

by Elizabeth Jardina, Sunset researcher We'd been really lucky. A lot of things can go wrong when you get a flock of chickens: Ch... 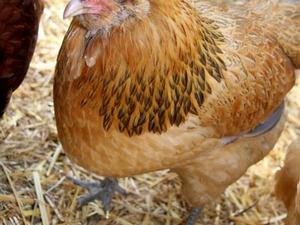 A lot of things can go wrong when you get a flock of chickens: Chicks can catch colds. Flocks are attacked by wily raccoons. The pecking order can get so crazy that you end up with a fatality.

None of this had happened to us. Our chickens had grown up like champs. Just like chickens should. Healthy, hearty, squawking.

And then I went out to visit the girls yesterday morning. I picked up Ophelia, who was our first girl to lay. 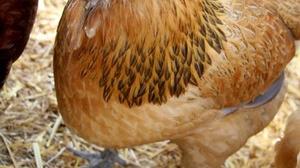 Her chest felt puffy. Confusingly puffy. Had our chickens always felt this way?

I put Ophelia down and picked up Alana, our other Ameraucana. Her chest felt like it should: Slight and bony.

Also, she was making a peculiar stiff-necked side-to-side motion withher head. I swear, it looked like she was trying to clear her throat.

A quick lesson on chicken anatomy: Their esophagus runs down the front of their chest, and then widens into a little sac called the crop. That’s where food is stored and moistened until it continues its way inside the chicken to its two stomachs. (Extra credit: The two stomachs are the proventriculus, which contains gastric juices and acid, and the gizzard, where seeds and other hard things are mechanically broken down by strong muscles.)

Anyway, the organ in question here is the crop. Ophelia’s was big and firm. Also, she didn’t seem to be eating. (She would politely take a pellet of food from my hand, but then drop it without consuming.)

It was obviously time to do two things:
Ask our copy chief, Erika Ehmsen, to call her husband, Steve (a vet), for consultation, and pore over the archives of the BackyardChickens.com forum.

Pretty soon I realized that what had happened to Ophelia sounded an awful lot like an impacted crop. What this means is that either a tangle of grasses or hay has formed a knotty ball in her crop, and it can’t empty itself.

Judging from anecdotes on the Internet, there are typically four outcomes:
1) The problem magically resolves itself.
2) The chicken dies, often unexpectedly.
3) The chicken goes to the vet.
4) Home remedies are administered. 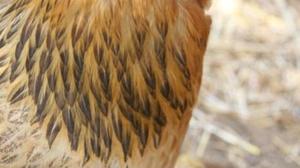 Home remedies run the gamut. The most benign is massaging the crop while the chicken is upside down to try to make her vomit. (Didn’t work. I learned later that this isn’t a great idea because if something is so large that it’s stuck there, it’s too big to come up. Plus it stresses your chicken out.)

The next step: Feeding your chicken a syringeful of warm water and mineral oil and massaging the crop to help break up the contents. This isn’t as mild as it sounds: If you accidentally squirt water or oil into the windpipe, you’ll kill your chicken, sometimes instantly.

Then, home remedies go straight into shocking: performing chicken surgery. Yes, seriously. People on the Internet — nice, otherwise normal-seeming people — sometimes sterilize an X-acto knife or sewing scissors, and cut their chickens’ chest open, remove the ick that’s blocking them up, and glue the skin back together with superglue.

I like these chickens, but I wasn’t ready for the home surgery route.

Then we heard from our vet consultant, Steve Randle. He’s an excellent vet, but one who doesn’t typically treat chickens. He listened to Ophelia’s symptoms, and after doing a bit of research, he agreed that it sounded serious. He gave me names of a couple of vets who worked with chickens. Or at least birds.

I called Adobe Animal Hospital in Los Altos. Their one vet who would treat a chicken said that an impacted crop was an emergency and should be treated within 24 hours.

All this time, one question kept rattling around in my head: Why did we name her Ophelia? Didn’t we realize that a tragic name was bad news for a chicken?

Our food editor Margo True took the ailing Ophelia to the vet.