Chicken Smitten (or, How the Chickens and I Ended Our Romance, but Remain Friends)

by Elizabeth Jardina, Sunset researcher I bought our chickens a bunch of dill at the grocery store the other day. I have completely... 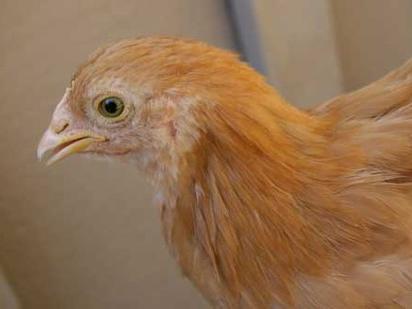 I bought our chickens a bunch of dill at the grocery store the other day. I have completely cracked.

I was wandering around, trying to drum up some lunch, and I couldn’t help but check out the fennel selection, just to see if there was anything that our flock would like. The fennel was OK, but didn’t have as much of the feathery foliage tops as I would have liked; plus, it was $4.99 a pound, which is a lot for a weedy free-ranger that grows, literally, on the sides of highways. But right next to the too-expensive fennel was a gorgeous, full bunch of dill. $2.99. I bought it, along with some clam chowder.

Note, I did not purchase a vegetable for me to eat. Just for the chickies. Like I said, cracked.

We’re slowly learning about the chickens palates. They seem to like most plants in the carrot family, which includes their beloved fennel, dill, carrot tops, parsley, and celery greens. As best I can tell, their general rule is: Bitter is better.

Their patch of arugula has been plucked bare (the peppery green is their absolute favorite; we’ve re-planted, but germination takes time), so we’ve been saving scraps from the test kitchen to satiate their need for greens. At various times, Sunset staffers have brought in lovingly saved leaves of soft butter lettuce or mild red-tinged Oak Leaf lettuce; the chickens have been shockingly ungrateful. But give them some bitter carrot tops and they’re in chicken heaven.

To be perfectly honest, though, our girls are happiest to munch sow thistle or a weedy grass that’s popping up everywhere around their coop. (Our best Sunset garden minds think it’s quack grass; we think the seeds came from the straw we’re using in their coop.) They love weeds. (I tasted them myself; the grass is not delicious, but the sow thistle isn’t bad. Not that I’m advocating eating random plants that pop up in your garden, because I’m not.)

In other chicken-related news, I’m sorry to report that the chickens and I have fallen out of love. I’m still happy to drop a few bucks for the joy of having them rush over to eat dill out of my hand, but as they grow older (They’re all of 15 weeks old now) they’ve gotten skittish. And a little unfriendly. For a while I was letting Honey hop up onto my lap so I could stroke her golden, soft, marvelous feathers as I fed her. Then we had an … incident, shall we say, that ended that practice. How to put this? Both ends of Honey’s digestive system were working at once. Onto my lap. Let me tell you, from the front lines, that chicken
poop is smelly but washes out in the laundry perfectly. 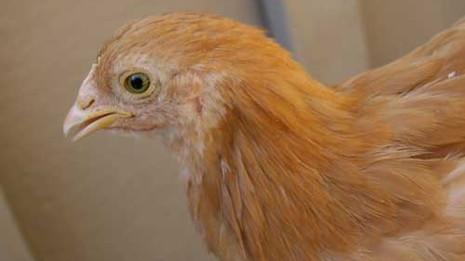 Ease of laundering aside, that little incident was enough to prompt me toward thoughts of roasting our little friends, perhaps with lemon and rosemary. (Weird how most people eat chicken nearly every day, but when you think about eating chickens you personally know you start to sound like Hannibal Lecter.)

Then, a mere two days later, the other Buff Orpington, Charlotte, pecked my back so hard that she broke the skin as I was crouching down to feed one of the others some greens. (Broke the skin just a tiny bit. But that was enough for me to wake up in a panic in the middle of the night, convinced that I had somehow contracted salmonella.)

Since then, the chickens and I have had a strict hands-off policy. Fellow chicken-wrangler MacKenzie Geidt and I still visit them in the afternoons and give them something good and green to eat, though. We also check the nesting box daily, to see if this is the day that the hens start laying eggs. So far: nothing. They’re 14 and 15 weeks old, which is actually a little young. (Most chickens start laying when they’re 4 to 6 months old, but the fact that it’s winter now may interfere with that timeline.) 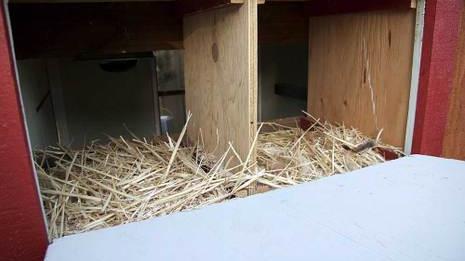