For months now, I have been craving tomato chutney. Not just any tomato chutney, but a specific kind of explosively tangy, sweet-hot Indian... 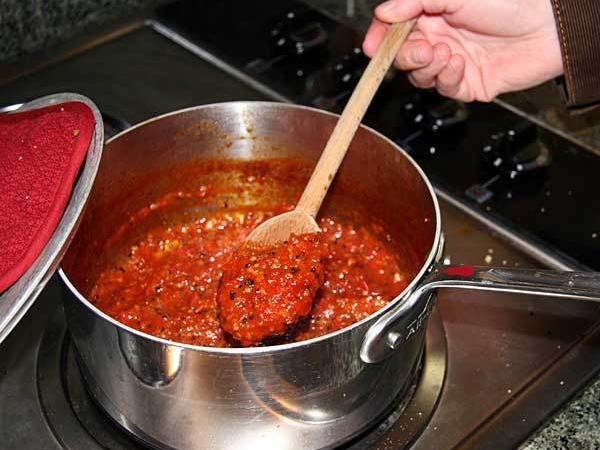 For months now, I have been craving tomato chutney. Not just any tomato chutney, but a specific kind of explosively tangy, sweet-hot Indian chutney that I’ve had a few times in India. There’s nothing better with grilled steak or lamb burgers, or with a comforting bowl of Indian lentils (dal) and cooling yogurt on the side.

I bought a few jars, but none of them were hot enough, or tangy enough. I needed one with a kick. So finally I just made it myself, using tomatoes from our one-block garden. 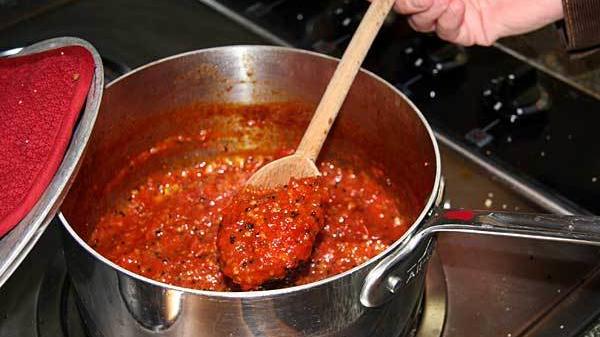 It’s pretty close, I think; if I’d had time to go find some jaggery (Indian brown sugar) at an Indian grocery, I would have used that instead of light brown sugar. But brown sugar works just fine. You can make this chutney without going to an Indian market—although I highly recommend such an excursion, if you’ve never been. It’s like a mini-trip to India—aromatic, bustling, and full of interesting foods to try.

Time: 1/2 hour, plus anywhere from 1 to 4 hours to simmer down, depending on how juicy your tomatoes are

This chutney is so intense that it tastes as though all the flavors were dancing on the head of a pin.

1. Put the garlic, ginger, chile, and onion in a bowl (you’ll need to toss them into the pot all together, quickly).

2. Heat oil and a few mustard seeds in a heavy-bottomed 3- to-4-qt. pot over medium-high heat, covered. When seeds begin to pop, quickly toss in the rest of the mustard seeds and the nigella seeds and slap on the lid to keep them from flying all over the place. Swirl the pot around on the burner for a few seconds to mix the seeds with the oil and help them pop.

3. Add the garlic, ginger, chile, and onion and lower heat to medium-low. Cook, stirring occasionally, until onions are soft, 6 or 7 minutes.

4. Stir in cayenne, salt, and cumin and cook for a minute or so. Add tomatoes, sugar, and vinegar; bring to a boil, then lower heat  and simmer uncovered until thick and jam-like, anywhere from 1 to 4 hours, depending on the juiciness of your tomatoes. Taste and add more vinegar, salt, or sugar if you like. Serve warm.

* Nigella is a little flowering plant native to southwest Asia. Its black, teardrop-shaped seeds taste strongly of celery; they’re used in the Indian subcontinent (often in chutneys and pickles) and in the Near and Middle East to sprinkle on breads. You can find nigella seeds in upscale grocery stores or in Indian markets, where they’re labeled kalonji.

Make ahead: Keeps in the fridge for at least 2 weeks and 1 month in the freezer.