Unbending gender; unladylike behavior in the coop; egging along; the weeds-and-infested-olives diet

by Elizabeth Jardina, Sunset researcher First things first: Six weeks ago, we had a sudden panic that our Rhode Island Red Carmelita was a... 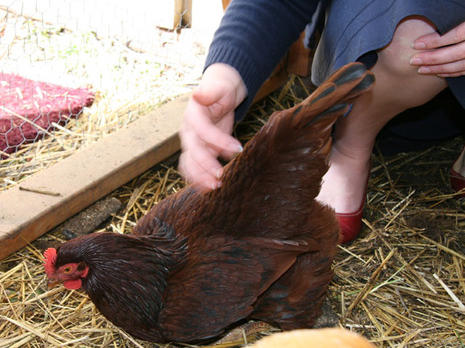 First things first: Six weeks ago, we had a sudden panic that our Rhode Island Red Carmelita was a rooster because of her suspiciously shiny feathers. Well, we can put that worry to rest. 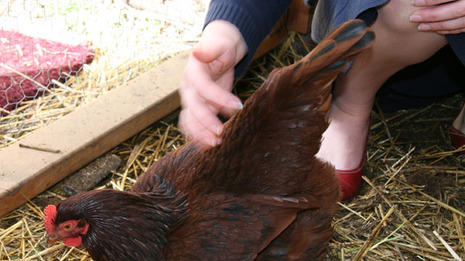 That, my friends, is Carmelita doing the egg squat. (Also, that is my skirt and completely inappropriate footwear for tromping around in a coop. For future reference: heels + straw = unladylike.)

Up until last Monday, she was still avoiding us when we tried to pet her. No more. Now we have four girls squatting, Ophelia (our layer!), Carmelita, Ruby, and Alana. 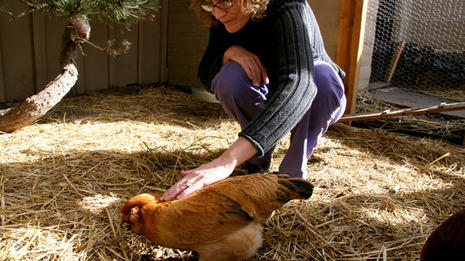 But things here in Eggland aren’t all souffles and really, really good scrambled eggs. We only have one girl laying. (I think. Other members of Team Chicken think Alana’s also laying; both their eggs are blue, so it’s hard to tell.)

And our girl Ophelia has had a bit of trouble. Last week, I found a completely soft-shelled egg in the straw under their coop. It was egg-shaped, but covered in a rubbery, translucent membrane (the same one you sometimes have to pick off hardboiled eggs). I could see the yolk inside, but it had broken. (I thought about photographing it for the blog, but everyone I showed it to found it gross, so I’ve refrained, dear reader.)

And the next day, I found another one, but this was in their little yard. It had broken. I imagine they were both from Ophelia, our layer, since she didn’t lay an egg those days.

Soft-shelled eggs, while freaky, are apparently fairly normal, especially in chickens that are just starting to lay. In addition to their layen crumble and cracked corn, we’re feeding them crushed oyster shells for calcium, which should help them develop that good, thick egg structure. And, of course, lots of greens:  Scraps from the kitchen and, well, weeds. I’ve been collecting them from the alleys near my house as I walk my dog in the morning. My husband gets embarrassed and has threatened to stop walking with me, but I maintain that by ridding the neighborhood of sow thistle and weedy grasses, I’m doing a public service. It’s volunteerism of a sort. 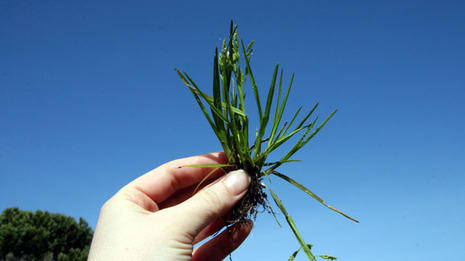 Since then, our Ophelia has laid four good eggs, shell and all.

Now it’s time for the others to start doing their part! We are not running a chicken charity here! They need to step up. (To be fair to them, chickens are supposed to get 14 hours of daylight a day to really lay optimally. Right now, we have about 11 hours. Some people use artificial light to stimulate more laying in winter, but we haven’t bothered.)

I leave you with a question, readers of the blogosphere:
Our chicken coop is underneath an olive tree. (One of our many olive trees that are infested with the olive fly.) Anyway, it means that tons of olives fall near (and roll into) the coop. The chickens adore the olives; they fight over them, and gulp them down pit and all. Pit and all! And to no apparent ill-effect. So my question is this: Are olives okay for them to eat? I understand that chickens have, er, uncomplicated digestive systems, but this seems dangerous. And yet, they’ve been eating them for months and never had any trouble.