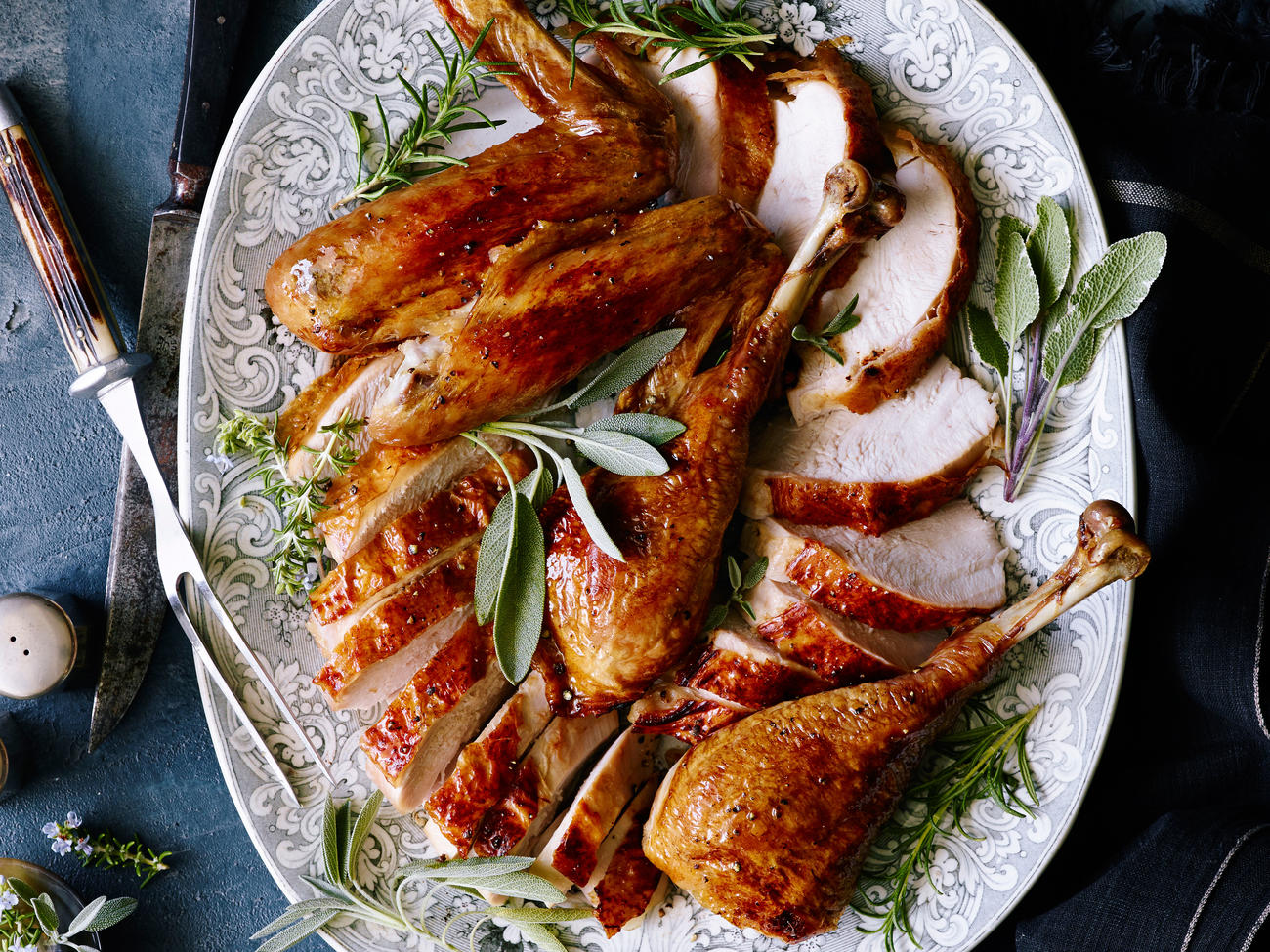 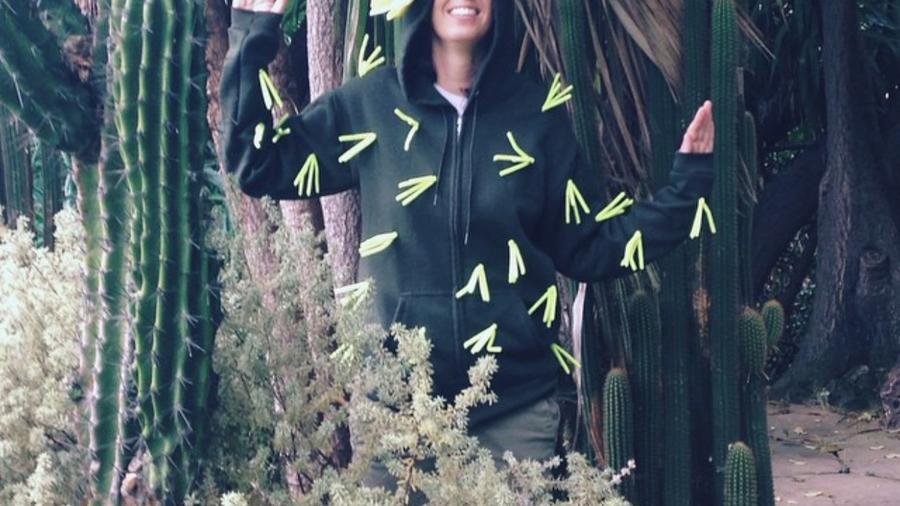 I’m a cactus! (Johanna Silver / Sunset Publishing)
When Food Editor Margo True fell for the tantalizing turkey photo in Heartlandia, she was in for a world of trouble. Why this recipe? We wanted to cook Thanksgiving-ish food for our current round of the Sunset Cookbook Club, and this was the only turkey recipe in the book. Plus, the turkey looked amazing. I’m also a big fan of cutting the turkey up beforehand and cooking the white meat and dark meat separately—as this recipe instructed—because that way, the white meat never dries out. (A wonderful, easy recipe from Sunset food stylist Val Aikman-Smith introduced me to the technique a few years ago.) What was it like to make it? Ridiculously laborious, and I say that as someone who loves “project” cooking. Left to my own devices, I would streamline this recipe mercilessly, excising ingredients and steps to make it doable. I should have been forewarned by this line in Chef Adam Sappington’s headnote: “Simply brine and smoke the breast and marinate and braise the legs, and boom—it’s done!” Really? “Simply?” If you’re a professional chef, maybe. But I think he’s fibbing. 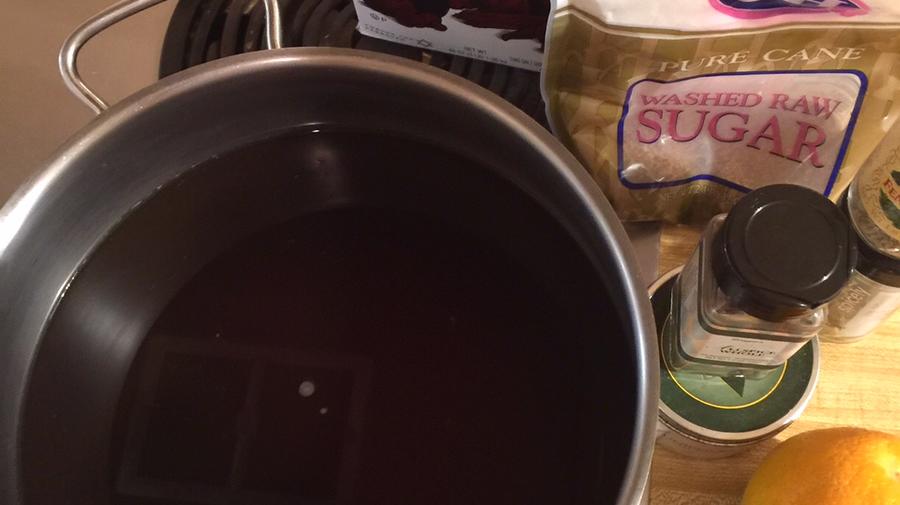 The brine, with the 8 ingredients that went into it. (Margo True)
You start by making a brine—with a prodigious amount of spices. I’d cut out half of them next time, since they made no impact (for example, I would lose the 1/2 cup of fennel seeds; they’re overshadowed by the star anise anyway). Once it’s cool, you plunk the whole turkey breast in the pot (…I think. More on that below). Then the whole thing goes into your fridge overnight. Next, you busy yourself with trimming, peeling, and thinly slicing celery, carrots, and onions. Also finely chopping three different herbs. 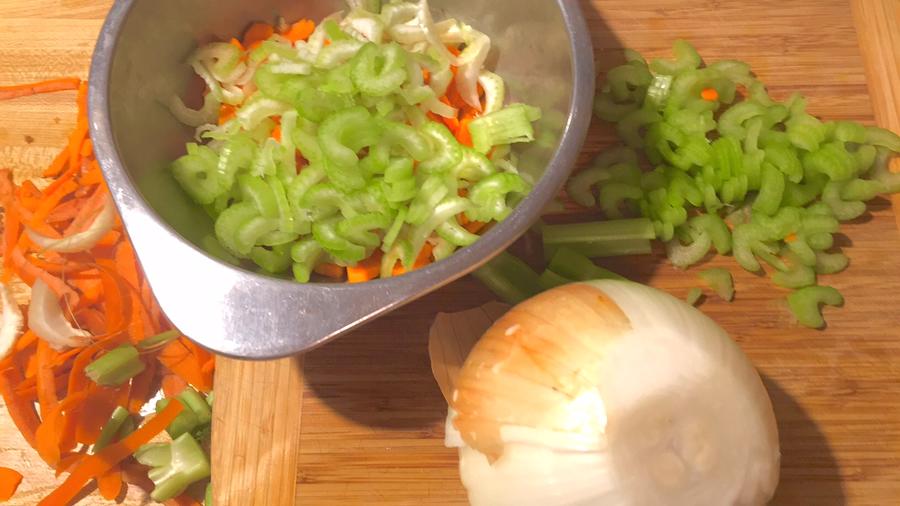 About halfway through the peeling, trimming, and thinly slicing. (Margo True)
Meanwhile, you season the turkey legs, combine them with the vegetables, and also refrigerate them overnight. You’d better hope that you have a giant fridge that’s not full of other Thanksgiving ingredients! (When I was making this dish, I had to use my cousin’s fridge next door.) I have to pause here to say that I was already perplexed by the recipe directions. First, you’re supposed to “remove the legs and wings from the turkey, keeping both breasts intact and the spine attached.” So, I cut off the wings and the legs—only to see, in the photo of the turkey, that the wings were supposed to stay connected to the breast. (I ended up braising the wings, not knowing what to do with them; the recipe never mentioned them again.) Also, if you keep the spine—the backbone—attached, you are left with the whole ungainly football-shaped carcass. Figuring that the chef meant to say “breastbone,” I cut the backbone off. At that point, my turkey more or less matched the turkey in the photo. Also, it then fit in the brine pot. 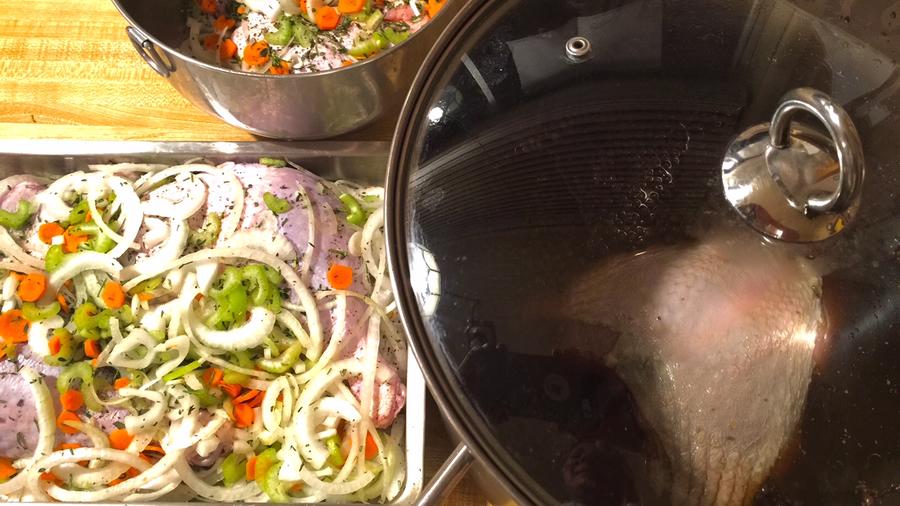 The breasts in brine and the legs and wings smothered in vegetables. (Margo True)
Day 2: Time to smoke the breast. My parents have neither a smoker nor a charcoal grill, the only options offered by the recipe, so I decided to try smoking the turkey on their little gas grill. Unfortunately, the grill temperature wouldn’t drop down to 200° no matter how low I turned the dial. So, I resorted to oven-smoking. Luckily, I’d learned how to do this from Sunset’s oven-smoked chuck-eye recipe, based on one from Tracy Smaciarz of Heritage Meats in Rochester, Washington. 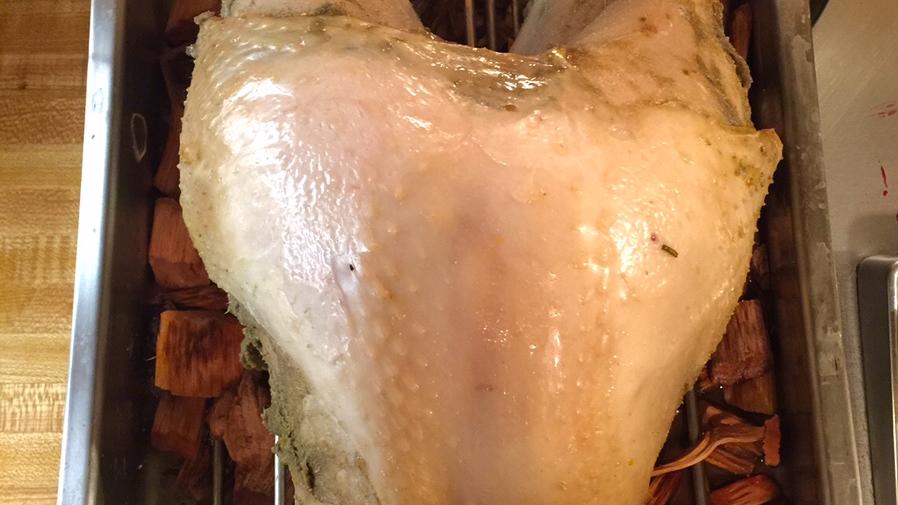 The breast, set in a rack over soaked hickory chips. (Margo True) 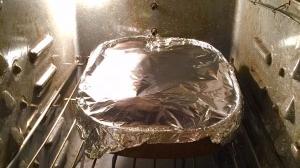 Before smoking the turkey in the oven, I set the pan (covered with foil) on a hot burner on the stovetop to get the chips smoking. (Margo True)
Next: Browning the legs (and the wings, since the recipe had told me to sever them from their rightful spot on the breasts) and the vegetables. Mom has one medium-size cast-iron skillet, so this took a while. Actually, the recipe specifies that you should cook the turkey legs in a Dutch oven, but I was confused, because the photo clearly shows a skillet. 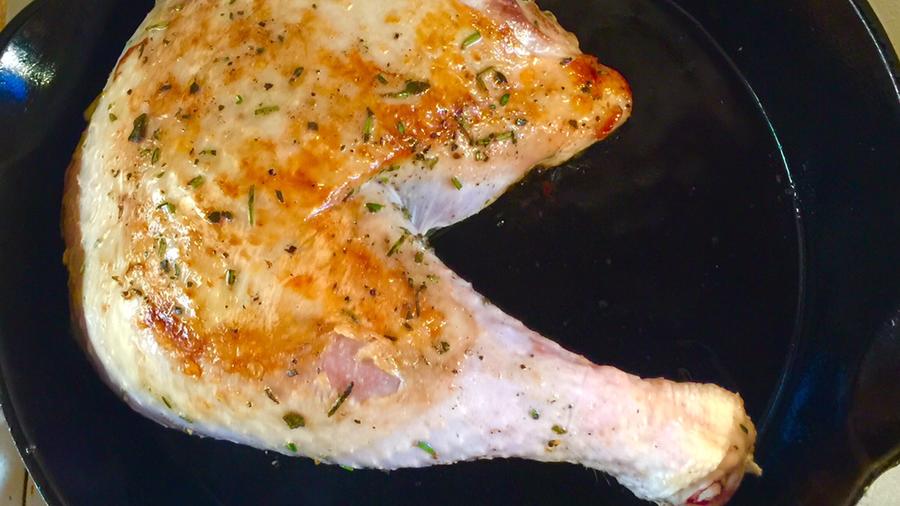 The marathon browning session. (Margo True)
After the marathon browning, you’re supposed to have the legs and vegetables in one pot and then (somehow) fit in a cup of wine, along with 2 quarts of chicken stock. That’s 9 cups of liquid and probably 4 cups of vegetables. I don’t know how the food stylist crammed all of that into the skillet shown in the book’s photo, even without the wings. I suspect that the food stylist was fibbing, too. So, I had to switch to my Mom’s most massive piece of cookware, a copper casserole that she bought in Yugoslavia 40 years ago. The recipe did not say whether to braise the legs covered or uncovered. Figuring that the legs and vegetables would never cook unless they were covered, I wrapped foil over the dish and shoved it in a second oven. When the legs and wings had finished braising, I looked at the book’s photo again. The braising skillet shows no liquid (my turkey was swimming in it). Guess I shouldn’t have covered the pan. Also, I noticed chunks of vegetables in the photo, and only a few of them. Why’d I thinly slice all those vegetables? I muttered to myself. 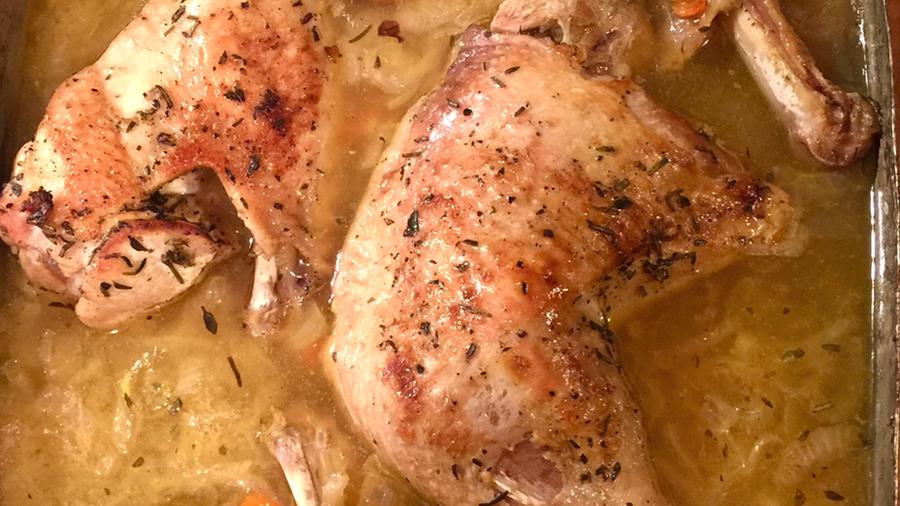 (Margo True)
At last, everything was ready. I served the turkey as best I could, with the vegetables and all that sauce on the side in a gravy boat. 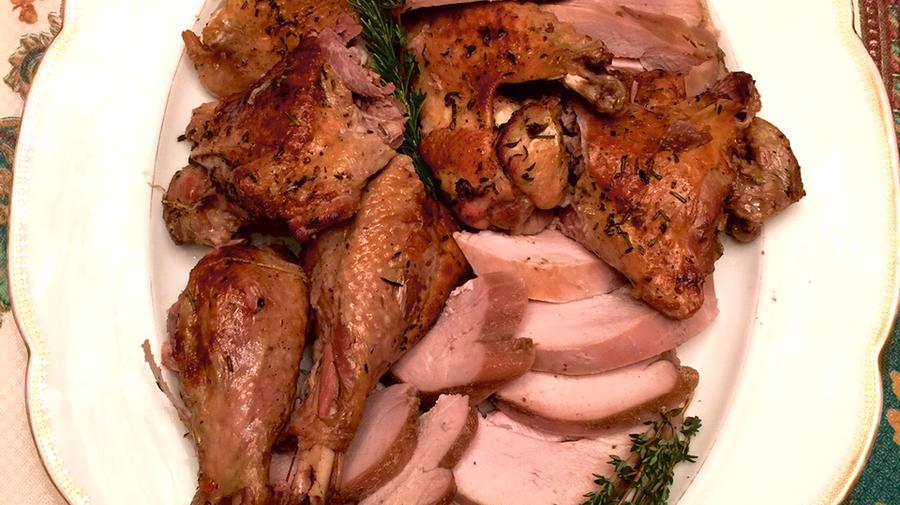