by Elizabeth Jardina, Sunset researcher A side note that's only mildly related to the One-Block Diet: While members of Team Bee were havi... 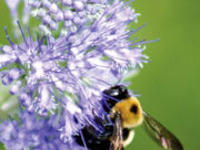 A side note that’s only mildly related to the One-Block Diet: While members of Team Bee were having their paradigms shifted, I was on vacation in Vancouver, B.C. In particular, I was swinging blissfully on a playground in Stanley Park, which you may remember as one of our top 10 city parks from our April issue.

It’s quite lovely. Except for the fact that I got stung by a bee*. On the neck.

This is ironic for two reasons. The first is the aforementioned paradigm-shifting going on in Grass Valley.  The second is that I just finished writing a little piece for our June issue advocating bee-friendly gardening.

The nerve of that bee! I’ve taken a strong stand in support of bees! And this is how they repay me?!

Good news: I’m apparently not allergic to stings. Rather than the classic treatments (ice, ibuprofen), I treated the indignant sting with a trip to the Vancouver Aquarium. They have beluga whales!  And sea otters, which are so cute I wanted to take one home to live in my bathtub. (Not recommended.)

Here’s a YouTube video (not mine) of sea otters. I recommend watching to soothe frustrations at work, bee stings, backaches, and other minor pains. (They’re holding hands! I love them.)

*In retrospect, I may have not been stung by a bee. After discussing with Margaret Sloan of Team Bee, it may have been a yellowjacket, which is not a bee at all, but a wasp. Like other wasps, they are carnivorous and can be notoriously aggressive. The thing that buzzed my face, and then stung me (on the neck for pete’s sake!) was definitely yellow and black. My husband said it was bee-like, but I didn’t get a good look at it. Because it was stinging me.

Now that I think about it, this may be how bees got a bad reputation in the first place. Lookalike wasps.  Aggressive lookalike wasps.