And then there were three…Sunset lost another chicken today 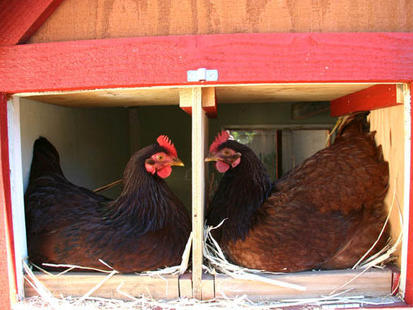 Carmelita (left), with Ruby, a couple of years ago.
(Photo: Elizabeth Jardina)

I thought Carmelita, our second Rhode Island Red, would outlive all our other chickens. She’s always been as healthy as a little horse, with shiny, supple feathers and a kind of street-savvy attitude, if you can even say that about a chicken. She was still laying reddish-brown eggs, even at age 4, which is like Methuselah for a laying chicken. I imagined her ruling the roost when the others were in their dotage.

I’d seen all four of our surviving chickens on Saturday and threw down some kitchen scraps for them. Nothing odd, just kale and some herbs. And they were all prancing around in usual style.

On Sunday, Angela—one of our retesters from the Sunset test kitchen—was showing some friends around the garden late in the afternoon, and she saw Carmelita’s dark-red body lying under the mugo pine tree in the coop. Clearly dead. I missed the phone call bearing the news, and listened to it only at midnight, when it was far too late to do anything about the situation. Plus, I was out of town.

Tony Soria, our operations manager, very kindly buried her this morning. He said that she was untouched, so apparently no predator killed her. And the coop looked untouched too; no telltale rips in the chicken wire or dug-out dirt beneath it. What in the world killed her?

All I can imagine is that she ate something that was very, very bad for her, something she found that the others didn’t. When I arrived at Sunset this afternoon, I looked all around the coop and saw nothing that could’ve done the damage. The other chickens, although jumpy, seemed fine.

So this little life passes from the planet. I’m not sentimental about it, the way I was when Ruby, my favorite chicken, died several months ago. But because of the service she gave (all those eggs!), and also the effort we invested in her, she deserves respect.