An indelicate question: What is going on with our chicken’s hindquarters?!

by Elizabeth Jardina, Sunset researcher. Photos by E. Spencer Toy. (Not the indelicate one at the bottom. That one is by Margo True, the in... 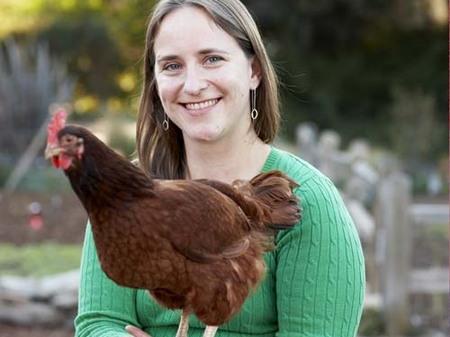 by Elizabeth Jardina, Sunset researcher. Photos by E. Spencer Toy. (Not the indelicate one at the bottom. That one is by Margo True, the intrepid.)

This is Ruby. I mean, she’s the chicken. The person is me. 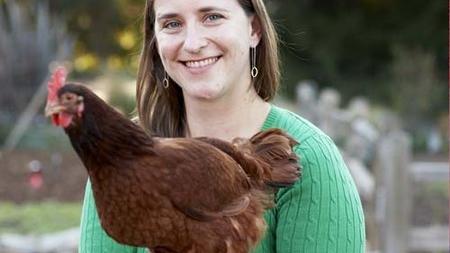 You remember her. She’s our perky Rhode Island red, one of the boldest girls, originally our little runt. 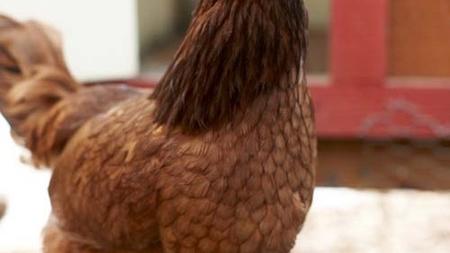 Well, Ruby’s got an issue. (How to put this politely?) 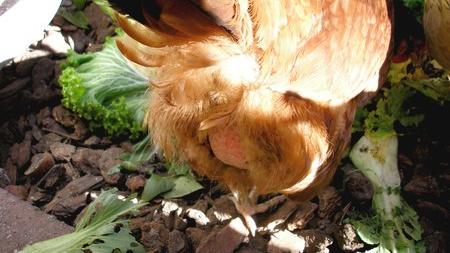 She’s got a weird bald spot on her butt.

It’s soft; it’s bald; it doesn’t seem to be causing her any distress. When I saw it initially, I panicked and thought she was eggbound. (Eggbound is a very bad, very scary condition. It happens when an egg gets stuck inside a chicken; you have to soak the chicken in warm water and try to coax the egg out with “personal lubricant” or oil, and pray that it doesn’t break. If it does, the shards of eggshell will likely kill your bird. If she doesn’t deliver the egg she’ll die. A lot of eggbound situations end up with your chicken dying.)

But eggbound birds seem really sick. Lethargic, straining to get the egg out. And Ruby seemed fine. Perky, even. Continued to lay eggs. Just with a squishy, tennis ball–size bald spot on her backside.

Our Ameraucanas and buff Orpingtons both molted in early January; Ruby and her fellow Rhode Island red did not. Might this be a very specific kind of late molting? On her rear?

I’ve found other, similar stories on the Internet, but no satisfying answers about what it might be. Some people theorize mites, but our other chickens don’t have mites. And Ruby’s not at the bottom of our pecking order (that would be Honey), so I find it unlikely that any of the other girls would be pecking away at her nether-feathers.

As long as she keeps laying, I suppose she’s okay, but it’s disconcerting to get a glimpse of her pink, er, altogether when she turns around.

by Elizabeth Jardina, Sunset researcher. Photos by E. Spencer Toy. (Not the indelicate one at the bottom. That one is by Margo True, the intrepid.)