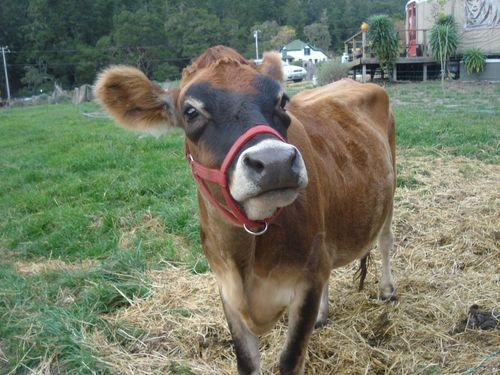 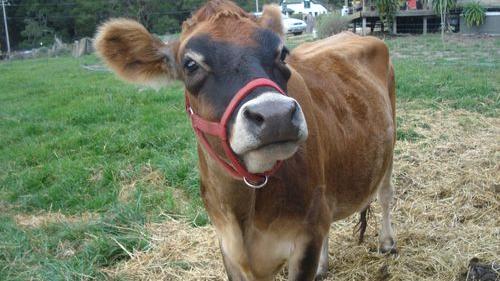 Rats. Adelaide has a staph infection.

This fuzzy, sweet-faced little Pie Ranch cow, whom we’d hoped to part-own, has an inflammation in her udder that is uncomfortable and lowers her milk production–and has prompted her owners to let her dry up, that is, stop lactating. (Her calf has already been weaned.)

Dede, the cow-keeper at Pie Ranch, apologetically explained that it’s better for Adelaide’s health to treat her this way rather than bombarding her with general antibiotics. Once she’s dry, the affected part of the udder can be treated with a more specific and effective antibiotic.

Ah, Adelaide. She seemed so perfect. For a completely over-the-top Adelaide song by Anberlin, click here. (We’re not really that torn up. It’s just a good song.)

So, no milk for a while. The plan, according to Dede, is to let Adelaide recuperate and then breed her sometime this winter. Cows gestate for as long as women do, so around 9 months after hooking up with a bull–whenever that might be–Adelaide will have her calf…and Team Cow will have its milk.

Actually, we may have it sooner. We’re investigating some options.

In the meantime, if you know a cow who wouldn’t mind an extra owner, let us know!