A virgin queen on a cloudy day

We knew something was amiss the last time we were in the hives.  On May 4 Hive Veronica was incubating at least 17 swarm and supercedure c...

We knew something was amiss the last time we were in the hives.

On May 4 Hive Veronica was incubating at least 17 swarm and supercedure cells, each one housing a little larvae swimming in royal jelly.  The hive was full of bees, brood, and larvae, but no eggs. Queen Veronica was nowhere to be seen.

It’s no secret that at over 2 years old, Veronica was growing a little long in the mandible and short on the eggs. She was slowing down; for some time her egg-laying pattern has been as patchy as the hair on the head of a nonagenarian.

But today we couldn’t find anything in the top three boxes but honey. Lots of honey, and, oh yes, three empty swarm cells and one supercedure cell, the tops chewed off in perfect round circles. But no brood. No babies. No Veronica. No queen of any sort.

Disheartened, we went through the bottom box and found three capped swarm queen cells, each one under a pile of bees. A smattering of capped brood cells. But still no eggs, no larvae, nothing, nada, bubkes.

The bees, who up until now had been as docile as little lambs during the inspection, were starting to snarl.

In despair, we started putting the boxes back together. Those three open swarm cells—did they mean the hive had swarmed? Was there a laying worker who had killed the baby queens? Were we going to lose another hive?

And then, we spotted her. Right there on the inner cover wasa virgin queen! 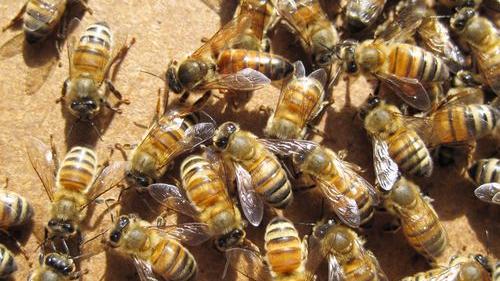 She was running around, over, and under the other bees. A few followed her, but she didn’t have the usual retinue. However, when we put her in the brood box, all the workers began fanning and following her scent down into the box.

According to the Hive and the Honey Bee, after emerging, a virgin queen will mate within six to 13 days, on a calm, warm afternoon. Trouble is, the weather is windy and chilly right now.

We don’t know if this new queen will make her nuptial flight in time to become the hefty egg producer we need in that hive. All we can do is wait and hope the bees know what they’re doing.

They’re bugs, right? We’ve got to trust them.