Left: Little Ruby starts to nod off at the back. Below: The soothing chest rub. By Margo True, Sunset food editor Last Frida... 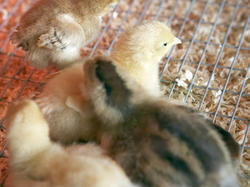 Left: Little Ruby starts to nod off at the back.
Below: The soothing chest rub.

Last Friday, Sunset brought home a boxful of fluffy, tiny chicks (see Cheep! Date). We set them up in our prop shed, raised and lowered the heat lamp (they need to be kept at 90° for the first week or so), and fussed over water and feed and air flow. (As a reminder, we are not eating these creatures–see Team Chicken’s First Few Clucks.) We hovered over our itty bitty brood like a mother, well, you know. Then came the end of the day, and one of us (me) assumed the first weekend chick duty.

You wouldn’t think this would be a terrifying prospect, but I have a speckled history when it comes to poultry. Even as a little girl I wanted to raise chicks. We were living in an apartment at the time so it wasn’t practical, but so badly did I want them that I’d sometimes sneak storebought eggs into bed and tuck them under the covers next to my pillow when I slept, hoping they’d magically hatch. Later, when I was around 10, I won a couple of day-old chicks at a fair. You can imagine the ecstasy. I brought them home on a balmy spring day, and it seemed natural to take them out for a romp on our dewy green lawn. Fluffy and Butterball caught cold in about two seconds and the next morning I found them spreadeagled under the water dish, lifeless.

So I was a wee bit anxious last Friday. I went in to see our flock maybe, oh, 10 times between 5 p.m. and midnight. Four of the chicks were strapping 9-day-olds and already had feathers sprouting, but the little Rhode Island Reds were only two days old, and one of them had developed a condition we’d been warned about at the feed store: pasty butt. (This was not something our chicken books had prepared us for.) Basically it’s a situation best resolved with warm water, cotton balls, and gentle application, and you’ve got to do it, or your chick’s minuscule digestion won’t function. I did my best. But little Pasty, whom I quickly came to call Ruby because of her shiny deep-red beak, just didn’t seem as active as the others. She’d stand under the heat lamp, legs wide apart, her fuzzy red head slowly tipping forward in a kind of narcoleptic trance. She looked like a tiny drunk at the bar. She’d either be doing that or cheeping frantically, her whole soft underside heaving up and down with the effort.

Late Friday night she cheeped like this for a good 10 minutes straight. What did she want? Was she hungry? Tired? I couldn’t stand it any more. I picked her up and did what Robin at Half Moon Bay had showed us, the Soothing Chest Rub. It is really an amazing trick. You do this to a chick (see one of our Buff Orpingtons in photo above) and they just go limp. Sometimes they’ll stretch their legs way out like they’re sitting in a cabana chair on the beach, they’re so relaxed. Anyway, Ruby fell asleep in my hand. Talk about gratifying…The funny thing was that soon as her peeping stopped, all the other chicks lay right down and went to sleep. They seemed so relieved to have a break from the noise.

On Saturday morning, I bolted out of bed at 7 a.m. and ran to the office, a bad chick dream in my head. All six were awake and moving! Praise the heavens. I e-mailed the rest of the team with the good news: The Chicks Are Still Alive.

After putting in some quality chicken-watching, petting, and feeding time that day and the next, I can say that these birds are anything but boring. The Ameraucanas–which look more like game birds than chickens, with dramatic Cleopatra eye markings–like to sleep with their necks entwined, and love to get up on top of things, including the water dispenser. They’re growing at a tremendous clip (their tails sprouted since yesterday). The Buffs are fat little honey-colored things and look exactly alike. They’re quite docile and when they settle onto their chests for a nap, they look like yellow dandelions. And the Rhode Island Reds, the babies, well, they’re practically too cute to be allowed by law.

Other fun habits: they like to stretch now and then, with a wing and a leg extended. (No yawns, though.) When they drink, they look like they’re gargling. They seem to think that food in a human hand is better than food from a dish. (Six little beaks pecking feels like gentle rain.) Best of all, they are all getting along and don’t seem to have established the dreaded Pecking Order (yes, that’s where the term comes from. It’s worse among chickens than among humans).

Monday morning arrived and still the chickens lived. Everyone on the team rushed into the shed to say hello to them. Ruby was still dozing off, but had spurts of energy, too, and her feathers had sprouted. She was eating, she was gargling at the water dish. We collectively decided there was hope. Grow, little chicks, grow!