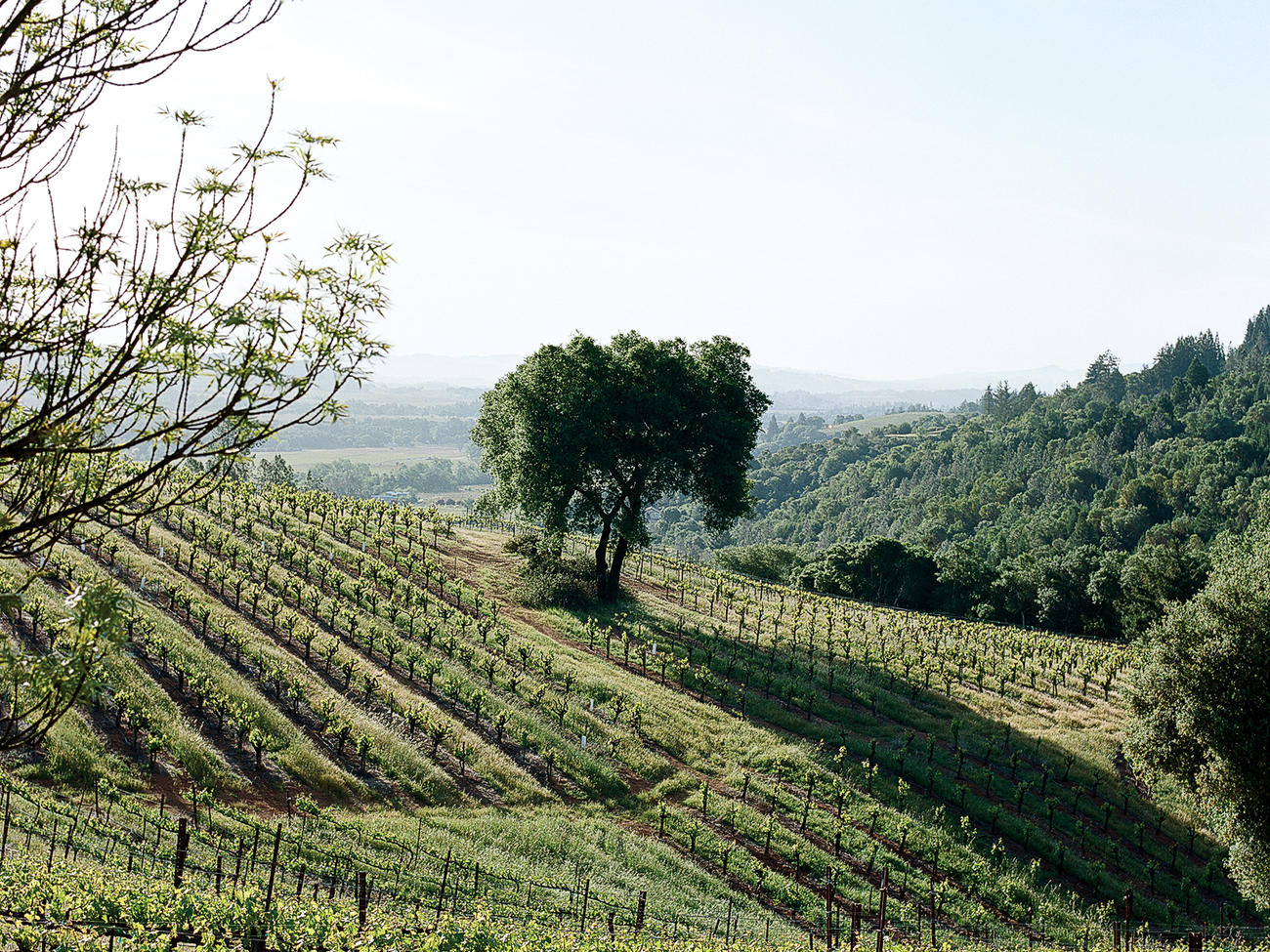 Photo by David Fenton
Written by Amy McConnell May 16, 2006
Share this story

Early on a Saturday evening, the smooth sound of jazz drifts from the terrace of the Hotel Healdsburg. Stylishly dressed 30-somethings recline on Adirondack chairs, wineglasses perched on armrests, reveling in the last bits of light on this perfect spring day. Outside, the trees on the plaza start to fade into twilight.

Inside the lobby, people lounge at the bar and sprawl on enormous couches grouped around a fireplace. You’d think they were in their own living room. That’s just what the Hotel Healdsburg seems to want guests to feel ― a comfortable informality with a sophisticated twist rarely found in traditional Wine Country inns. And people are lapping it up, in droves. “Healdsburg has become a huge draw, partly because of the hotel,” says Christine Hanna, vice president and general manager of Hanna Winery in the nearby Alexander Valley. “It’s very cutting edge.” In fact, with its minimalist design, the hotel looks more in keeping with San Francisco’s South of Market neighborhood ― or New York City’s SoHo ― than with an agriculturally oriented town in Sonoma County. That’s typical of Healdsburg, where city sophistication blends seamlessly with farm-town friendliness and rustic charm.  Simply sophisticated Healdsburg has the good fortune to be situated at the confluence of three distinct award-winning wine regions: the Russian River and the Alexander and Dry Creek Valleys. As a result, the town is a perfect base for sampling a wide range of Sonoma County wine styles ― and in the process, enjoying some of the area’s most beautiful scenery.

The town’s viticultural riches have given rise to a culinary explosion ― in the past four years alone, four highly acclaimed restaurants have opened here. Now, urban-chic dining spots stand cheek by jowl with the bookstores, bakeries, and galleries that surround the town square.

The buzz among foodies centers around the Dry Creek Kitchen, which adjoins the Hotel Healdsburg. Though the new restaurant is the brainchild of Charlie Palmer, who also owns Aureole in Las Vegas, it’s a breed of its own. Here, 30-year-old executive chef Mark Purdy, whom Palmer recruited from Aureole, is embracing the challenge of cooking entirely with local products. In Las Vegas, Purdy had ingredients flown in from all over the world. Now he bases the menu on whatever’s fresh from the Healdsburg Farmer’s Market that day ― like the morel mushrooms and fava beans he bakes alongside a CK lamb loin.

The new breed of wineries The idea of simplifying is something local wineries are getting hip to as well. The latest trend in tasting rooms is to knock down the barriers between visitors and winemakers, letting guests observe the workings of the winery at their leisure rather than on a guided tour. At Stryker Sonoma, the most recent addition to the Alexander Valley, floor-to-ceiling glass walls in the tasting room let you look down into the barrel room, the fermentation area, and the crushing pad ― not to mention a huge swath of the Alexander Valley and the Mayacamas Range.

“It’s so restful and peaceful up here, and then you stop at a winery and it’s either dark, or you’re looking at a back bar,” says Karen Maley, one of the owners. “That’s not what we wanted.” Over in the Russian River Valley, another new winery is capitalizing on the same trend. “I want to change the industry,” says Naomi Johnson Brilliant, the 29-year-old owner of Roshambo Winery, which opened in March. Roshambo winemaker Paul Brasset, whose résumé includes Clos du Bois, Fritz Cellars, and Pezzi King, is already making an excellent Merlot, among other varietals. “Too many wineries focus on people who already drink wine,” says Brilliant, who wants to reach a diverse crowd by hosting art shows and parties featuring local bands. Naysayers might scorn Roshambo’s bells and whistles ― great wine, after all, sells itself. But if there’s any town where such a winery could succeed, it’s Healdsburg. And why not? Says Brilliant, “I just want to make wine tasting more fun.”