Alex Kane is having a busy spring. The 28-year-old guitarist, DJ, and producer just wrapped up two sets at Serenity Gathering, a four-da... 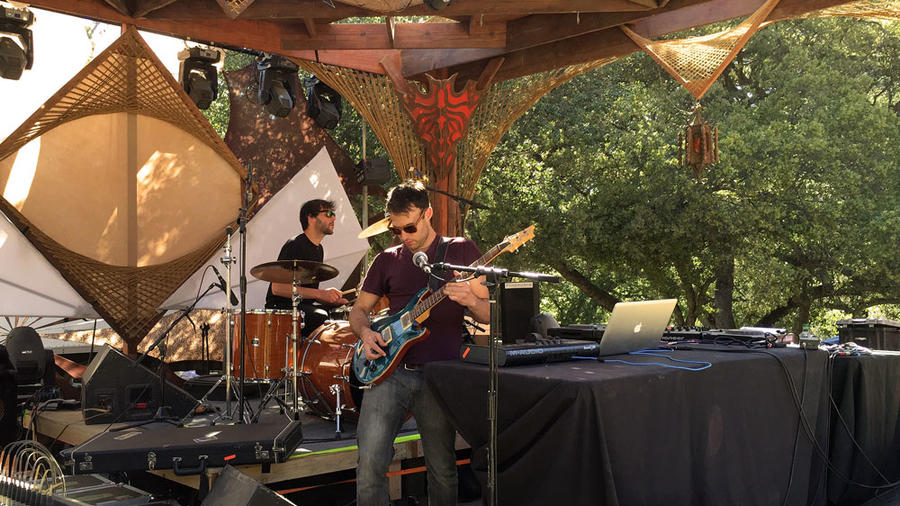 Alex Kane is having a busy spring.

The 28-year-old guitarist, DJ, and producer just wrapped up two sets at Serenity Gathering, a four-day art and music festival “focused on creating an environment of positive collaboration” on the La Jolla Indian Reservation just north of San Diego. He’s releasing his new EP, Anthropocene, this week; playing a live set on March 28 at Oakland’s SariFest, an annual art showcase featuring the work of a group of photographers and aerial performers who appear regularly at Burning Man; and DJing again on April 9th at F8 in San Francisco, as part of Reactivate, an interactive technology and music party which brings together such diverse artists as Eitch, an electronic-pop vocalist and installation artist Rich DDT. But for Alex, there’s nothing else he’d rather be doing.

“I love to play live, without question,” says the Bay Area-based musician. His latest work has helped bridge the gap between the electronic and jam-band elements that shape his music. Today, his performances range from straight DJ sets to instrumental sets with live improvised guitar and drums over electronic beats.

Alex’s road toward his particular fusion of genres has stabbed ever westward. The Maryland native moved out to Boulder, Colorado for college, and never looked back. After his stint in Boulder, followed by travels through New Zealand, Indonesia, and South America, Alex spent a year in Portland, Oregon, where he reflected on his experiences and worked to create music that excited him. “Over time, I’ve become more mindful of how I create music,” he says.

Not long after, Alex moved to San Francisco to do a master’s program and to pursue music professionally. Alex began licensing his music to GoPro, ESPN, Teton Gravity Research, and Clif Bar, while also working for a company that handled some of his biggest musical influences, including Bassnectar and Glitch Mob. Last summer, surrounded by some of the most innovative electronic artists in the Bay Area and beyond, Alex began work on his newest EP. Anthropocene, named for the current geological epoch characterized by the impact of human activity on the world, is Alex’s most carefully crafted – engineered, even – work yet.

“The more you dive into the science of it, the more you can engineer the sonic quality of the music,” Alex says, after a lengthy explanation on how he’s been trying to incorporate more principles of the physics of sound and compression, and use negative space as a compositional tool in his music. Whether his approach drew him to San Francisco or is a by-product of living in it, the city suits him. “San Francisco is an interesting place because it’s incredibly creative and incredibly productive… [there’s always this] compulsion to make something.”

With the EP finished, Alex is focused on playing great shows and sharing his music with others. “A month from now, I hope that there’s a handful of people who have heard the music either live or streaming or downloading it, and use it as a medium for something – for studying, for running, for inspiration – any positive influence,” he says. “Or maybe that we just blew them away at a show.”