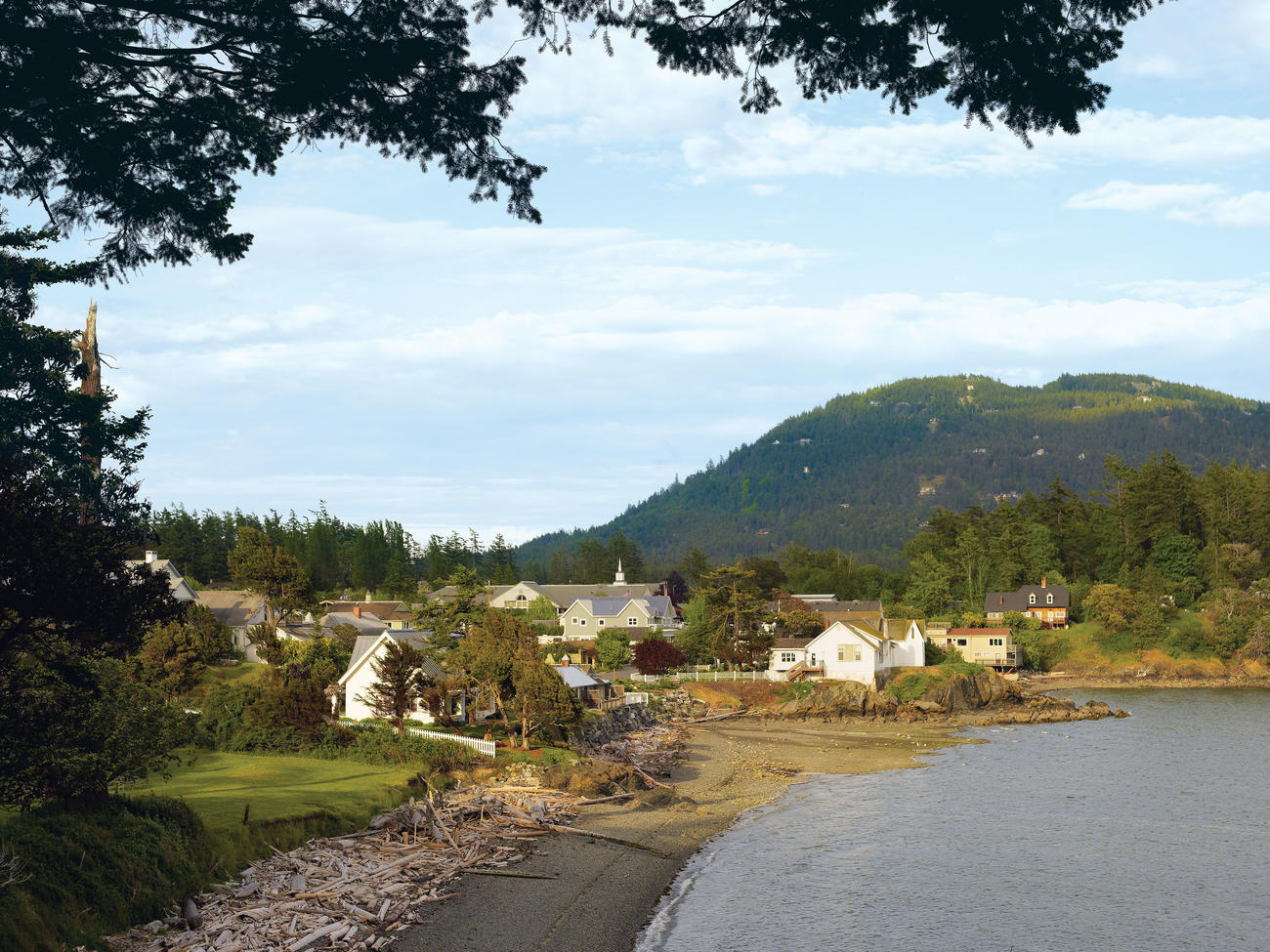 Plunk a Cape Cod village at the end of a Norwegian fjord, tractor-beam this picturesque mash-up to an island 80 miles northwest of Seattle, and you’ve got Eastsound.

This one-time agricultural port town is the largest settlement on Orcas Island. That’s not saying much ― Orcas, the second most populous of Washington’s San Juan Islands, has only 5,000 residents.

Even at Main Street and North Beach Road, the town’s busiest intersection, you’ll look in vain for a stoplight, chain store, or flashing neon sign.

What you will find within Eastsound’s five-block centre ville is a vibrantly eclectic, even eccentric, assortment of restaurants, boutiques, and, most of all, people ― from graying hippie homesteaders and youthful organic farmers to well-heeled urban refugees, Carhartt-clad contractors, retirees, school kids, and artists of all stripes.

Even in summer, when tourists and part-time residents double the island’s population, the vibe in Eastsound is small-town mellow.

Natives and visitors alike stroll into Darvill’s Bookstore to pick up a newspaper and shoot the breeze, then amble across the street for coffee at the Sunflower Café.

What binds these contrasting elements into a vital community is a shared love for this glorious blue-green landscape, where sea, mountains, forests, and sky come together. The place is a little inconvenient to get to, but its proudly independent residents wouldn’t have it any other way. –Craig Canine

Orcas Island is a one-hour ferry ride from Anacortes, WA (see Orcas Island Ferries for rates and sailing times). Eastsound is a 20-minute drive from the ferry landing. Orcas Island Shuttle; 360/376-7433, offers rental cars and summer bus service. Kenmore Air Express; 866/435-9524, makes daily flights to the Eastsound Airport and other points around the island. If you’re staying over, the Inn at Ship Bay (from $195; 360/376-5886) has great views.

The median Orcas Island home price in 2007 was $625,000. Tourism is the island’s biggest business. Many residents cobble together two or three jobs to stay on the island; some telecommute. Visit Islandcam for live webcams of Eastsound and other island locations. Best local news and ads: The Islands’ Sounder. As for the weather, put away the rain slicker, at least some of the time: Eastsound gets about one-third less rain than Seattle.

Chris Leschinsky
In San Luis Obispo, CA, residents have plenty of opportunities to breathe deeply outdoors, from city and park trails to the nearby Pacific.

For your consideration: San Luis Obispo is the most Californian place in all of California.

Edna Valley wine country is a few minutes south, and the coast is 10 minutes west by car or, as many in this relentlessly fit community prefer, 30 minutes by bike.

And the climate? Well, let’s see, how do you describe a place that’s as ideal for people as it is for wine grapes? Where the annual average monthly highs range all the way from 62° to 74° ?

SLO is a town of 44,359 people who live outdoors, whether on the trail that winds through the oak forests and meadows on Bishop Peak or along the shaded downtown banks of its restored creek.

Some of its best neighborhoods ― where the streets are lined by a mix of Queen Annes and Spanish bungalows ― sit within a few blocks of the back patio at the local coffee-house classic, Linnaea’s Cafe, or the eclectic offerings of the Palm Theatre, the only solar-powered picture show in the country.

And all year long, Thursday’s evening farmers’ market sends the scent of barbecued tri-tip (and a soundtrack of live blues) across the tidy urban landscape. –Matthew Jaffe

If you’re thinking about living the SLO life, figure on a median home price of $655,323 (2007). As for jobs, Cal Poly is the city’s biggest employer ― but the county is the third-largest wine-grape producer in California. For local news, try the free weekly, New Times or the city’s daily newspaper, The Tribune.

Everybody rides bikes here. This, arguably, is the place where mountain biking was born 30 years ago, and two-wheelers are everywhere: vintage cruisers, circa 1970, adorned with glittery handlebar streamers and bells, left unlocked in tidy, trusting rows outside Camp 4 Coffee; rusty Schwinns propped up on kickstands in front of Izzy’s deli; mud-splattered, full-suspension steeds rolling up Elk Avenue after a blissful beating on the infamous 401 single-track.

A recent proposal to begin mining molybdenum (a key element in steelmaking) just outside town on Mt. Emmons has drawn the ire of many residents, who came here for the scenery and wilderness access, if not the jobs.

There’s plenty to do besides free-wheeling. Cast for brown trout on the fast-flowing Taylor River, explore nearby Strand Hill on horseback, or scope out downtown’s cheerfully redone Victorians and sweet local boutiques like Beyond and Casa Bella (CB prides itself on having only two chain stores and zero stoplights). But the ultimate souvenir is your own refurbished cruiser bike, complete with a miniature Colorado vanity plate that reads eat my dust. –Katie Arnold

Crested Butte is 28 miles north of Gunnison, on State 135.

The median home price in 2007 was $815,000, but local agents say prices are rising. Along with real estate and tourism, telecommuting is big here. Go to skicb.com to check out live CB webcams. Best local scuttlebutt: The Crested Butte News.

Bozeman, MT, pop. 38,000, $299,000
The college town (Montana State University) boasts a picture-perfect setting at the base of the Gallatin Range. And terrific hiking, fly-fishing, and skiing. And a charm-filled downtown. So why doesn’t everybody live here? Maybe it’s those 14° highs in January.

Homer, AK, pop. 5,400, $244,902
Dubbed both “the Halibut Capital of the World” and “the Cosmic Hamlet by the Sea,” this fishing village 225 miles southwest of Anchorage is peopled by artists, fishermen, poets, home-steaders, and outdoorsy itinerants ― think far-northern Shangri-la.

Ojai, CA, pop. 7,800, $799,000
With its arcaded downtown and groves of citrus trees set in a mountain valley, Ojai is like an orange-crate label sprung to life. It’s a longtime spiritual center and has drawn mystics and seekers for generations ― and, thanks to biking and hiking options, adrenaline lovers as well.

Prescott, AZ, POP. 43,000 $246,938
Four seasons, including “winter lite,” mean lots of outdoor activities: hiking, canoeing, and more in the surrounding Prescott National Forest. There’s an old-fashioned downtown with a town square, a district with Victorian houses, and, thanks to Prescott College, a youthful pulse.

Sisters, OR, pop. 1,700 $415,000
Just 22 miles up the road from its big brother, Bend, sleepy little Sisters combines a jaw-dropping natural setting in the high-desert of central Oregon’s eastern Cascade Mountains with quaint Old West style and one of the state’s most highly touted school districts.

Truckee, CA, pop. 16,000 $539,000
The laid-back Sierra Nevada mountain town is just three hours from San Francisco but worlds away in real estate prices. It’s a tight-knit, outdoorsy community, with good restaurants and year-round recreational fun ― some of California’s best ski resorts are minutes away, as is Lake Tahoe.

All median home prices are based on 2007 data

10 Best College Towns in the West

12 Most Dog-Friendly Towns in the West