Fly a kite, soak in a spa, from Blaine to Long Beach 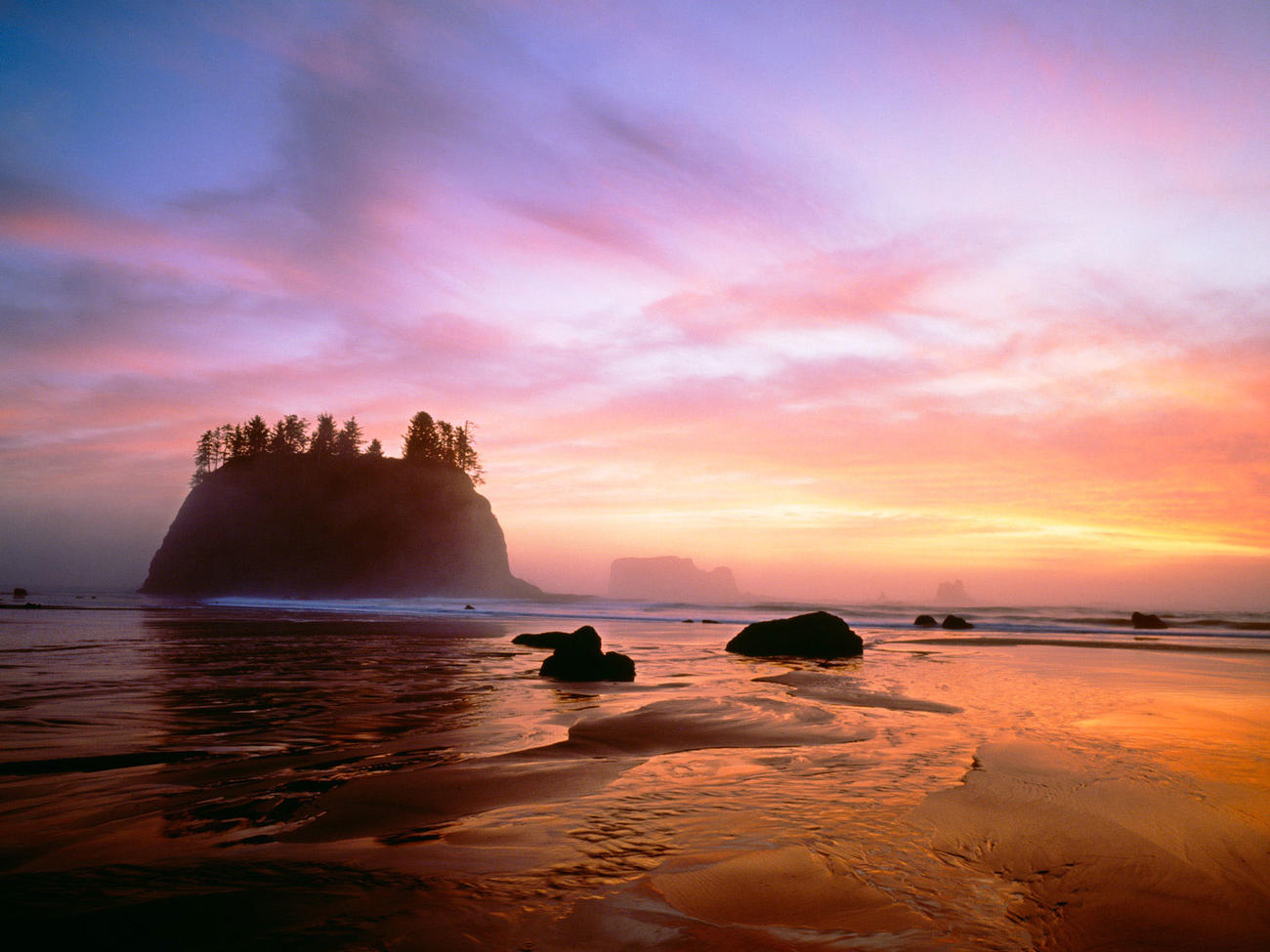 Wrapped in mists and storms much of the year, Washington’s beaches are like Greta Garbo—moody, passionate. Summer sunshine, like Garbo’s rare smile, intensifies everything—trees are greener, seas bluer, and the warm air … ahhh, it’s like a kiss.

Yet even in summer, Washington’s is an elusive coast. Miles of zigzagging shoreline contain hidden mysteries—San Juan Island coves, rocky pockets on Puget Sound shores, vast sandy stretches on the Pacific Coast. Washington’s beaches are as hard to know as Garbo. But, oh, the joy of trying.

This 1/4-mile-long spit grows or shrinks depending on the tide—but never quite reaches private Frost Island, just beyond its tip. Views of Orcas Island, an old homestead for picnicking, and walk-in campsites make this a great destination for a day or overnight. Mooring buoys accommodate boaters.

Got an hour? Or a weekend? Either lets you savor Langley’s cliff-hugging main street. Shop for art, then stop at the tiny Boy and the Dog Park overlook for views of Saratoga Passage. Putter on the beach—narrow Langley Sea Wall Park runs 1,000 feet below the overlook and can be reached by stairs or by a path. Or overnight at the stylish Inn at Langley (360/221-3033) and watch the tide go out from the comfort of a whirlpool spa.

Okay. So you need the constitution of a polar bear to swim here. Still, on a July day, the 2-mile beach bordered by Alki Avenue feels sunnily Southern Californian. Radios blare as city dwellers catch the rays and volleyball players churn up the sand. Reserve a picnic table (206/684-4081) and get knockout views of downtown Seattle with your meal. Try the original Spud Fish and Chips (2666 Alki Ave. S.W.).

It’s a long drive and a long hike, but this Olympic Peninsula gem offers a beautiful wilderness beach experience. From Ozette Ranger Station southwest of Sekiu, take a 9-mile (about six hour) loop hike—a 3-mile-plus boardwalk stroll to Cape Alava (the westernmost point in the contiguous United States), 3 miles south along the ocean, and 3 miles back to the ranger station via another boardwalk. Or camp just up from the beach. Just don’t bring your dog—no pooches allowed on the trail.From Sekiu take State 112 west about 2 miles; follow signs for Lake Ozette and turn south on Hoko-Ozette Rd., then continue 21miles to the Ozette Ranger Station. Camping reservations: (360)565-3100. Information: (360) 565-3130.

Generations of lovers have hidden out in the rustic cabins of this Olympic Peninsula lodge. No heart-shaped tubs, just wide, driftwood-laden beaches and nurturing solitude for you and your significant other.

The state’s oldest coastal resort has a restored downtown, a boardwalk, and 28 miles of sandy beach. But many know it as one of the best places in the world to fly a kite. That’s why 200,000 highfliers gather the third week of every August to celebrate. At the World Kite Museum & Hall of Fame, the show of fighter kites is but a tiny portion of a 1,200-kite collection.

Feel the Pacific’s awesome power, where the ocean meets the Columbia River at Cape Disappointment. Storms dump driftwood on Benson and Waikiki beaches. You can’t burn the driftwood or haul it away without a permit, but you can admire it, climb on it, and, if inspiration hits, build temporary creations. Log cabins and yurts provide close-by lodging.