The Olympia oyster has been absent for almost a century. But now it’s returning to our plates—and one taste will make you a believer 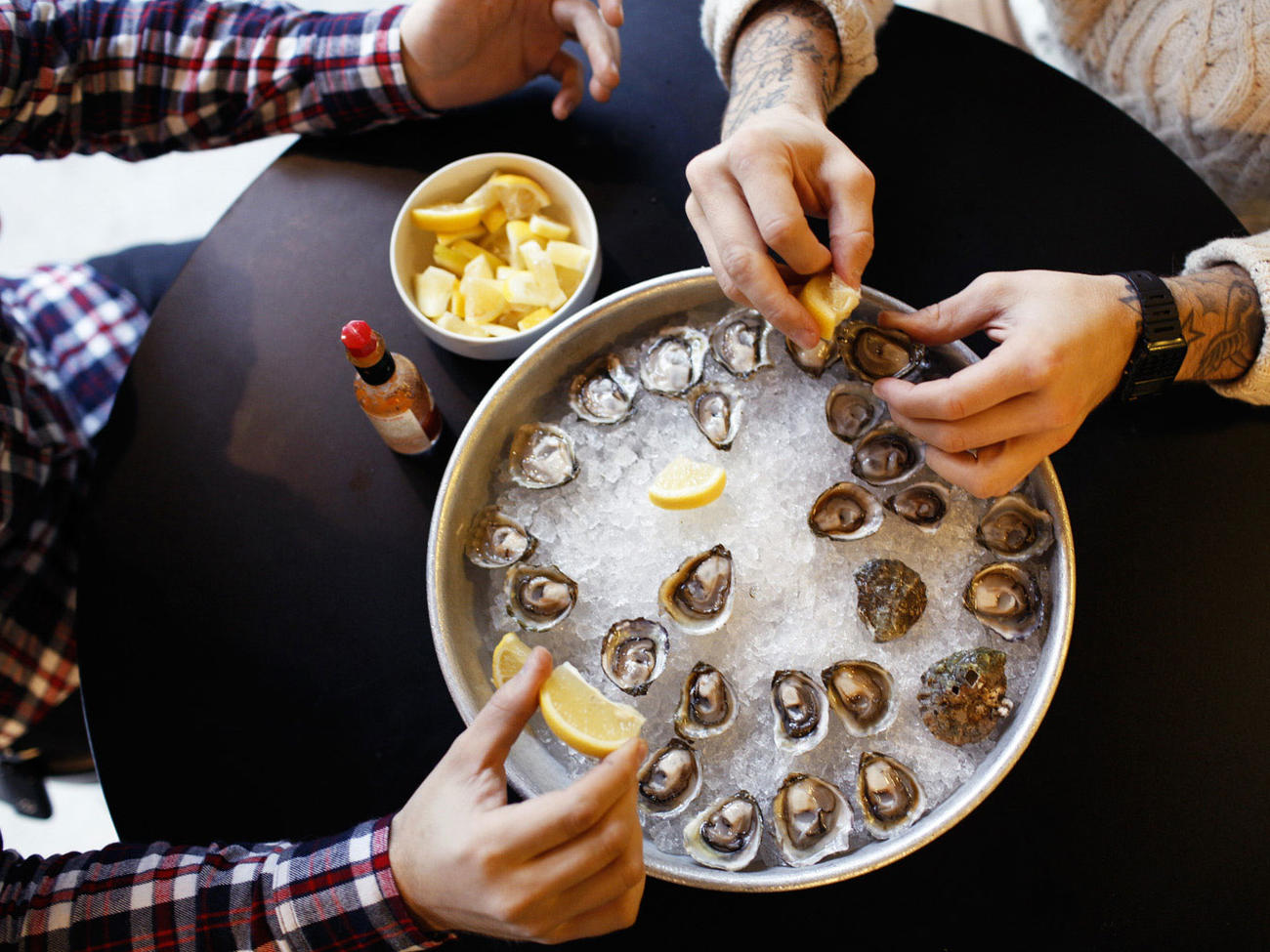 On a chilly winter night at Seattle’s Pier 56, I join the mob massing outside Elliott’s Oyster House. As mobs go, we’re a tame bunch, just some fleece-warmed souls eager to get on with the serious business of celebrating the state’s marquee mollusks. The annual event is billed as Oyster New Year, and ringing it in right means sharing a loading dock turned party space with 36,000 freshly shucked bivalves. I am about to experience the sound of 1,200 people slurping.

The doors open and I’m swept toward the 90-foot oyster bar manned by shuckers from just about every Puget Sound grower. It’s a dazzling display of Northwest bounty, 30-plus varieties shucked and iced and ready to shoot. I’m tempted by frilly-shelled Pacifics and deep-cupped Kumamotos, but tucked between these buxom starlets are the oysters I seek: the tiny Olympias. The shells are no larger than a silver dollar, the meat inside each a small knob. I take one, slurp, and a briny smack of sea hits my mouth, followed by a wallop of nutty flavor and a bright, coppery finish that lingers for minutes, filling my head with images of potlatch feasts, Gold Rush taverns, and my own dearly departed grandparents. This oyster can do all that.

The Olympia oyster bears the weight of history on its barnacled shoulders. As the only indigenous West Coast oyster, with a range from Baja California to Alaska, it sustained Native Americans for millennia. Lewis and Clark gorged on them, and Gold Rush forty-niners literally loved them to death, depleting vast beds in the San Francisco Bay and beyond. Even in oyster-rich southern Puget Sound, where pioneers crowed that “when the tide is out, the table is set,” the free meal ended. By the late 1920s, polluted wastewater from pulp mills slowly decimated Olympia stocks. During my own youthful summers on the south Sound in the ’60s and ’70s, at the family cabin on Totten Inlet outside Olympia, the oyster was like an honored ancestor—no longer seen but fondly remembered by my grandparents, who could spin tales of prodigious pan-fries and pearly shell mountains outside shucking house doors.

But Olympias are now on the rebound, thanks largely to the Puget Sound Restoration Fund, a group of growers, state and federal agencies, Native American tribes, tideland owners, and passionate environmentalists who scour beaches for wild Olys and use them to grow seed oysters, which are then distributed in the sheltered bays and estuaries that are the Olympia’s historical habitat. And as self-sustaining, naturally spawning populations have been reintroduced, farmed production—though still less than 1 percent of Washington’s oyster output—has held steady.

The director of the Puget Sound Restoration Fund is Betsy Peabody, a feisty, petite woman from Bainbridge Island. “The Olympia feeds us in so many essential ways,” she tells me over the roar at Oyster New Year, a benefit for the fund. “They are rooted in our history, our culture, our environment. They give us a deeper connection to this place.”

I know exactly what she means. Though I’ve eaten Olympias in San Francisco, my hometown, it’s only when I head to Washington that I really get the jonesing, searching them out at oyster bars, restaurants, and farmers’ markets. Arriving at Sea-Tac airport just two days earlier, I made a beeline for Taylor Shellfish Farms’ retail store in Seattle’s lower Capitol Hill. There, perched on a chrome-legged stool at the counter, barely an hour after bounding off my plane, I downed a dozen plump beauties, deftly opened by Seattle native David Leck, a 31-year-old Taylor employee and international shucking champ.

“The first time I tasted an Oly, I was maybe 18,” Leck told me as he popped open yet another by pressing his knife tip into the hinge and giving a slight twist. “We found these small oysters we thought were baby Pacifics. But the second I ate one, I knew right away they weren’t.” Leck has Ostrea lurida—the Olympia’s scientific name—tattooed on his left forearm. “We’re both natives, and I guess I’m crazy for them,” he explained.

Totten Inlet under a waning, three-quarter moon is an otherworldly, still place where silhouetted trees stand lonely against the sky and the loudest sound is the crunch of rubber boots on rocky, shell-strewn beach. It’s 1 in the morning, during the lowest tide of the day, and I’ve joined fourth-generation oysterman Bill Taylor, part owner of Taylor Shellfish—the largest producer of farmed bivalves in the country—at the water’s edge. Farther down the beach, the headlamps of oyster workers dance like fireflies in the blackness.

We walk to where the oysters are clumped in mesh bags to protect them from seastars and other predators. Taylor opens a bag, pulls out a handful of Olys, and starts shucking. With our boots sinking into the mud, we slurp one briny oyster after another. Olympias are notoriously finicky, needing a steady supply of plankton and specific water temperatures to flourish.

Growing them can seem as much art as science, and the attrition rate before they’re market-ready, after three or four years of cultivation, can be high.

“Olys are not a moneymaker for us,” says Taylor, whose ancestors began farming these waters in 1890. He raises Olys for other reasons. For the challenge of getting the growing conditions right. As an important tie to our past. And “because they taste so darn good.”

Later that day, I buy a couple dozen Olys at the nearby Taylor store and drive to the family cabin for lunch. It sits on a low bluff overlooking a cove and, beyond it, Totten Inlet. The cabin has been closed up for months and is cold inside. I light a fire in the kitchen’s wood-burning stove. As the room grows toasty, I set out the oysters, my shucking knife, some saltines, and a bottle of bitter IPA on the Formica dinette table that came from my grandparents’ kitchen many years before. I eat lunch and gaze at the view. Mist hovers just above the water, a flotilla of mallards drifts by, and the garish yellow-gold-orange leaves of alders and maples punctuate stands of dark, sober firs on the far shore.

In that moment and place, eating Olympia oysters simply feels right. I think of my grandfather and how he’d gather his fishing poles while my grandmother dished up blackberry cobbler—the best I’ve ever tasted. I think of my parents, themselves getting up there in years, sitting on the rocky beach watching us kids pile shells into our pails in the late-afternoon sun. I’ve since eaten all manner of delicacies in far-flung corners of the world, and have lolled on beaches of powdery sand and crystal blue water. Compared with them, cold and gray-washed Puget Sound and the scrawny Olympia may not seem like much. But to me, they’re home.

These three Washington farms supply virtually all of the Olympia oysters on the market. Keep in mind that supplies are seasonal and may be better during the cooler months.

Chris and Sarah Rhodes
John Adams of Sound Fresh Clams & Oysters removes young Olys from a protective bag to release them into an oyster bed to mature.