Advice from pilots and other professional travelers 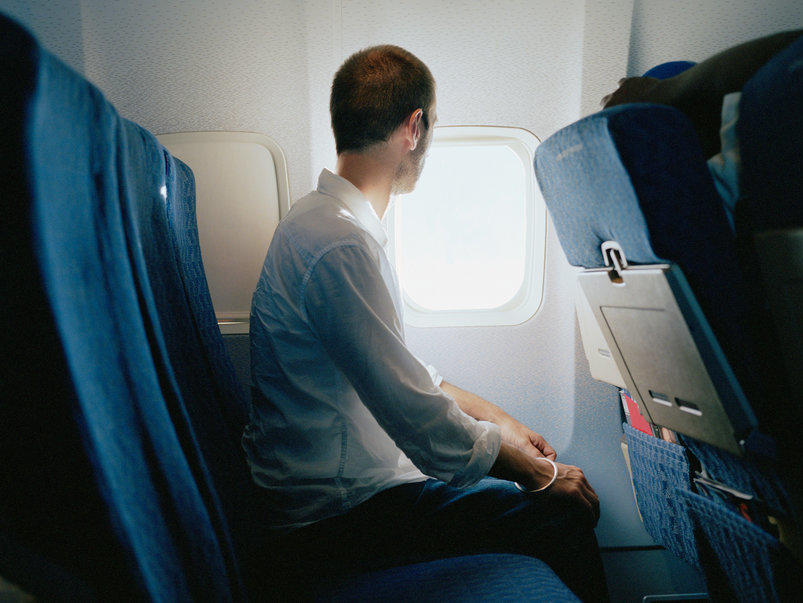 Written by Ali Wunderman for Travel + Leisure November 16, 2016
Share this story
Humans are not meant to be airborne — or at least that’s what people like me, who are terrified of flying, like to tell whoever is sitting next to us on our transatlantic. Like most others who share this particular fear, my early life was characterized by carefree travel. It wasn’t until my early 20s that I started panicking every time I needed to catch a plane. I became certain that this would be the flight to buck all those safety statistics. Still, Pinterest boards and Instagram photos taunted me. Everyone photographed in travel imagery frolics or lounges — there’s no sign of the shaky mess I become just thinking about flying to the Caribbean or Santorini. When I fly, I have to dose up on anti-anxiety medication just to step on board, and then I sleep my way to the destination. I’m not the only wannabe adventurer that gets uncomfortable on airplanes. Technology has evolved far faster than human biology, so while we want to be as futuristic as the machines we’ve built, I like to think our more basic instincts are still catching up. To me, everything about being in an airplane — sitting in cramped quarters, not being in control, being literal miles up in the air — makes me feel in danger, like prey. I have faith that all of us can conquer this fear. To test the theory, I’ve compiled techniques for combating the phobia, in hopes of making everybody’s dreams of far-flung adventuring come true. As is the case with any treatment, not every solution presented will be a cure-all; what may work for one could do nothing for another. And it’s important to treat any phobia conquest as a gradual process that (like, oh hey, an airplane flight) will have its ups and downs.

Turbulence seems alarming, but in reality it’s caused by the same routine shifts in wind that bores birds on a daily basis. Like birds, planes are built for it. “Most of the turbulence that the general population encounters is so minimal compared to what the airplane can take,” explains Kevin Kelly, a senior captain with a major U.S. airline.

I was once upgraded to first class on a 15-hour Cathay Pacific flight (because they thought I was my dad’s wife) and I spent nine of those hours sleeping peacefully under that goose down duvet. Feeling physically comfortable made achieving emotional comfort that much easier. For more on how to get upgraded, click here.

Becoming familiar with how carefully planes are designed to withstand emergencies can be comforting. The pilot and co-pilot are highly trained to deal with emergencies as well. “Recurrent training is every 6 months,” says Kelly. He has been flying for over 40 years, but he and other commercial pilots are constantly refreshing their skills.

4. Attend a Fear of Flying clinic

Fear of Flying, an SFO-based workshop, uses Cognitive Behavioral Therapy. After travel writer Marlena Spieler took the course, she was able to fly without debilitating fear. According to Spieler, “the enthusiasm of the pilots, the reassurance of the psychologists, the demystification of the airline volunteers, and the behind the scenes visits” helped in a major way.

Cognitive Behavioral Therapy can be used outside of a flight-specific clinic as well. “If you change your thoughts, you can change your response and behavior,” says Lisa Jackson, the editor of Eat Drink Travel,who has also dealt with flying anxiety. Addressing general anxiety can reduce the intensity during triggering moments, like being on a plane. Exposure therapy has been known to work as well.

Whether in a real plane or a simulator, getting your hands onto a plane’s yoke will give you a sense of control. Lack of control (and not being able to see the navigational tools, the way you can in a car or bus), is a major contributor to flying anxiety.