Whether you’re celebrating a black-diamond triumph or salving the agony of defeat, warm up after a day on the slopes at one of our favorite après-ski hotspots 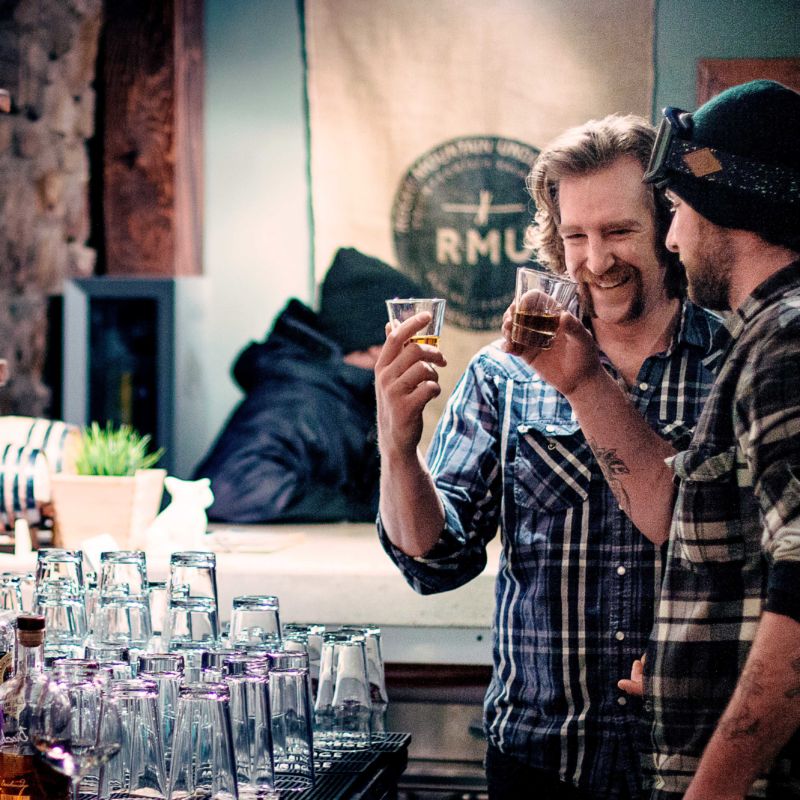 Pick up handmade skis at this ski/bike shop and bar that holds the record for the world’s longest shotski (1,234 shots!).

Signature drink: You probably can’t go wrong with any whiskey drink here, but the Old Fashioneds are highly recommended.

Dance in ski boots as a DJ spins tunes from this roaming former slope groomer customized with a cutting-edge sound system.

Signature drink: The snowcat roams all over the mountain—but drinks don’t, so bring your own libations here. Shake out a beach chair and get to grilling at this parking lot tailgate party. It’s only open ’til 6 p.m., which means you’ll have time to recover for an alpine start the next day.

Signature drink: Whatever you can pack in—The Beach is strictly a BYO operation.

Most après-ski experiences focus on warming you up. At the Bearfoot Bistro in Whistler, it’s all about chilling out in every sense of the word. The dining scene is fine and unhurried, and backed by cool live tunes most nights of the week. The hottest action, ironically, is often in the 32-degree Ketel One Ice Room. You’ll be issued a parka, and the booze will warm you up from there. Create your own flight from a list of more than 50 chilled bottles and toast the day’s snowy adventures with frosty glasses of vodka made of everything from potatoes to hemp. (Because: Canada.)

Signature drink: A glass of bubbly from a bottle that you have sabered the top off of yourself—staff will teach you how on a tour of the 20,000-bottle wine cellar.

Most après-ski bars tend to get rowdy—but then, most après-ski bars don’t have a sommelier. Root & Flower, in downtown Vail, puts a civilized spin on post-slope celebrating. More than 50 wines are served by the glass, and there’s a creative cocktail menu, too. The liquor selection captures the spirit of Colorado in a very literal sense, with vodka, whiskies, and even a gin that’s distilled locally.

Signature drink: How about a flagon of Arratzain Basque cider? It’s about as far from margaritas and Jäger shots as you can get. Located in the lobby of the Hotel Ketchum—actually, it is the lobby of Sun Valley’s Hotel Ketchum—The Hangout is as laid-back as it sounds. The space sprawls across several seating areas so those watching football or playing a cutthroat game of table shuffleboard won’t bother the party recharging with a book and a complimentary afternoon cookie.

Signature drink: La Grand Bulleit, which contains both rye and English breakfast tea, is fun and cozy at the same time—it’s The Hangout in a glass. Courtesy of The Bavarian

The oompah music and dirndl-clad waitstaff might seem a little much, but just go with it. Far from being stuck in the kitschy past, The Bavarian has been recently renovated and serves food ranging from the traditional (Sauerbraten) to right-here-right-now (kale salad). The bar is located at the base of Lift 4 at Taos Ski Valley, so you can schuss right up to the door and stay for a quick beer or cap your day on the slopes with a leisurely European-style meal.

Signature drink: A foam-topped stein of Andechs vollbier, a brew as uncommon here and authentically German as The Bavarian itself.

Few après-ski bars have drinks as finely crafted as those at the High West Saloon. That’s because the Park City bar is an outlet for the highly acclaimed wares of the High West Distillery. It’s not the only place to drink in town, and certainly not the cheapest, but located at the base of the Town Lift, it’s the most convenient post-slope spot. Order a drink as classic (Vieux Carré, Old Fashioned) or as out-there (the Proud Mary, blending rye, gin, and cinnamon) as you want. If you like what you’ve tasted, book a tour of the distillery where the magic is made, in Wanship, UT. And if you really like it, you’re in luck: High West products are becoming available for sale throughout the West.

Signature drink: A tumbler of Campfire whiskey, a so-crazy-it-works blend of bourbon, rye, and scotch. The après-ski options are so varied at Northstar California’s Northstar Village that it’s impossible to pick just one—and luckily, you don’t have to. Numerous bars and restaurants are crammed into the walkable village area. The strip begins right at the end of Village Run—you can go from skiing to sipping in minutes. Plop down next to the firepits at White Rabbit. Any kids in the party will keep warm with s’mores made over the patio firepits, and cocktails will toast adults from the inside out. To make an evening of it, reserve a cabana on the level above the enormous outdoor ice-skating rink. You can enjoy drinks and roasted marshmallows here, too. Go downstairs and join the skaters any time you want—there’s no admission fee for the rink.

Signature drink: Cocoa, spiked or not, from a hot chocolate stand on the cabana level.

“The Moose,” as it’s known locally, is more than a Jackson Hole institution—it’s an empire. The huge space contains two restaurants, a grocery store, gift shops, and one of the most iconic après-ski bars in the West: The Mangy Moose Saloon. No place that has an actual taxidermy moose suspended from the ceiling can take itself too seriously, and the saloon certainly doesn’t. The menu is full of familiar favorites like burgers and chili, and the drinks are classic and strong. There’s live music most nights, and many nationally known acts have passed through. Relax with a nitro brew and if you’re lucky, catch the next Blues Traveler or Brandi Carlisle on stage just feet away from your table.

Signature drink: The spicy margarita, made with fresh fruit and jalapeños.

Travel
Thinking of Skipping Ski Season? 35 Reasons Why You Should Go
Outdoor Adventure
Hit the Slopes at These Underrated Ski Areas in the West
Outdoor Adventure
From Snowy Mountains to Sunny Desert, These Winter Hiking Spots Will Warm You Up