These tortillas are all in the family 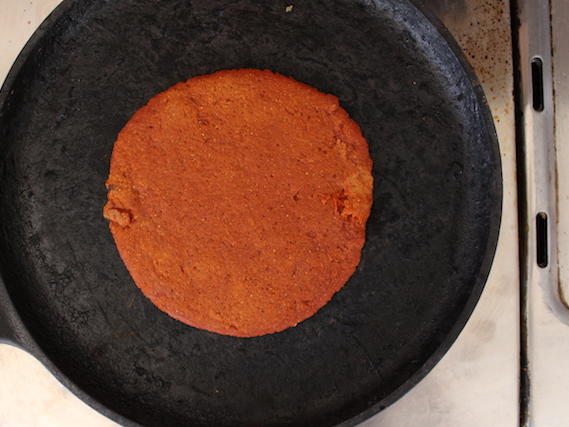 Cook the tortilla on each side until it looks a little drier and lighter red than wet masa.
Written by Harriot Manley August 9, 2004
Share this story

Little Joaquin Davis dives into the flour with both hands― it’s on his shirt, his cheeks, the tip of his nose. “Guess he’s in the family business,” says Marla Madrid, mother of the boisterous 2 1/2-year-old.

“Everything here is from scratch ― nothing powdered or dried,” Marla says of her Santa Fe Trading Company, tucked into a Sacramento warehouse. Inside, apron-clad employees, including Marla’s mom, dad, and brother, produce 30,000 tortillas daily.

Creatively flavored tortillas have been in the family for awhile. “When we were growing up in New Mexico, my mom would toss crumbled bacon in the tortilla dough,” notes Marla’s father, Andy. With wife Lola, he opened Mexican-food restaurants in Denver and California. “[Marla] was 11 years old, and she’d work the cash register, standing on top of a big can of tomatoes to reach the keys,” says Andy. Later, she headed to San Francisco StateUniversity.

After she earned her business degree there, the booming rise in taquerias in the city’s Mission District caught Marla’s eye, Andy says. “She came to me and said, ‘Dad, we’re going into the wrap business.’ She wanted to make flavored tortillas, using only fresh ingredients.”

Five years later, Marla says, “People tell me they’re the best they’ve ever tasted.” If you’d like to taste them yourself, visit Nugget Markets in the Sacramento Valley or farmers’ markets in Davis, Pleasanton, Roseville, and San Rafael (Civic Center), or order them by phone (877/538-7972). ― Harriot Manley