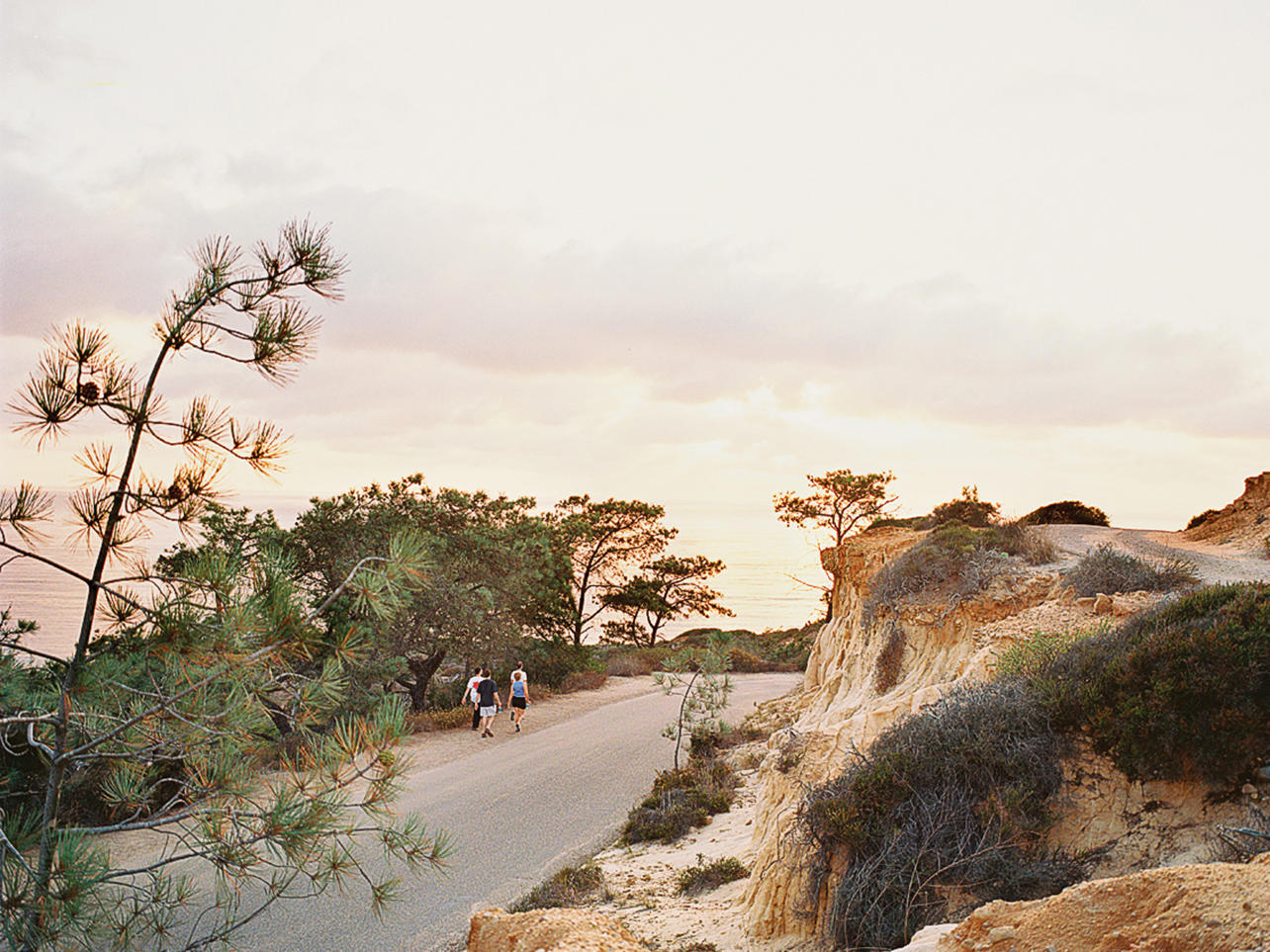 A couple holding hands stops to watch a wedding along the scalloped shore. They begin to resume their stroll when an older man approaches them. He is distinguished in the way of an emeritus professor and dressed formally, with a scarf wrapped around his neck.

Grinning shyly, eyes glistening and playful as if recalling some great love from long ago, he says, “I can tell just by looking at you: You are so happy to have found each other.”

It’s not that such a moment, one that transforms an afternoon walk into a lifelong memory, couldn’t happen in another town. But in La Jolla, where romance suffuses the air as surely as the Pacific breezes that sweep across the bluffs ― well, maybe it’s just a bit more likely.

Tempting as it is to describe La Jolla as Old World, what really survives here is a graceful, vintage vision of Southern California. It’s a place where folks converge at a palm-lined waterfront park each evening ― no doubt to see the sunset but also to see who is out and about, taking part in a longtime La Jolla ritual. And November’s a great time to take that stroll. Crowds are down, the theater season at the beloved La Jolla Playhouse is in full swing, and there are still plenty of days that carry the last hints of summer’s warmth.

Centered on the pink-hued, tile-topped tower of La Valencia Hotel, La Jolla climbs from the water’s edge up gently curving, sloping streets. The village ― nobody in this swanky community would ever call the commercial district anything so urban as downtown ― tops a rocky peninsula. It gives the ocean a more tangible presence here; look up from the village streets and you might see squadrons of pelicans gliding just above rooftop level.

La Valencia commands the village, both geographically and spiritually. It’s one of those grand Southern California hotels that recall the era when wintering in balmy climes was part of the annual cycle of the well-to-do.

Elaborate tilework and painted Spanish details adorn its main lobby and lounge. Here you can settle in with a drink and take in a view across the hotel’s red tile roof and through the swaying palms to the ocean. But its most evocative spaces are subtle ones: a tiny elevator still run manually and the Whaling Bar and Grill, with vintage red leather banquettes and a now politically incorrect whale hunt mural.

A few minutes’ walk away, the Museum of Contemporary Art San Diego takes a similarly elevated position above the shore. There isn’t a more beautifully situated museum in the country ― and while you might expect a museum here to be devoted to something traditional, the collection is instead filled with challenging contemporary works. Many keep the sea close in mind, including Pleasure Point, a Nancy Rubins installation of canoes, rowboats, and kayaks that literally bursts from the building like the id of an REI catalog.

Rare pines and a luxe resort

North of the village, the coast climbs to a mesa fronted by sandstone cliffs. The cliffs tower 300 feet above the ocean, creating an isolated 5-mile-long beach as wild as the rest of La Jolla is refined.

Finding this kind of coastal seclusion is remarkable. But atop the bluffs is something more precious still: some of the rarest pine trees in all the world.

Torrey pines grow naturally only here, at their namesake reserve, and at Santa Rosa Island off the Santa Barbara coast. The trees survive from a forest that went into decline as the climate became drier 10,000 years ago. The fogs that wash over the bluff have allowed the Torrey pines to endure, though their twisted shapes convey the species’s struggle to carry on in a changing world.

The trees have a place of honor at another one-of-a-kind spot atop this bluff: the Lodge at Torrey Pines. Set against a golden sky with the ocean in the distance, a Torrey pine atop a crag is depicted in stained glass in the lodge’s grand entry doors. If ever an entry set the tone for a building, this is it. Every detail throughout reveals craftsmanship that belongs to another era, from the post-and-beam construction to the hammered copper fireplaces. Though it has only been open since 2002, you would swear it dates back to the heyday of the Arts and Crafts movement in the early 1900s.

The lodge is exquisite, managing the difficult task of benefiting from its location without intruding upon the scene ― not unlike the city itself. They say that La Jolla means “the jewel.” Beautiful as a rare gem may be, it’s never truly complete without its setting.