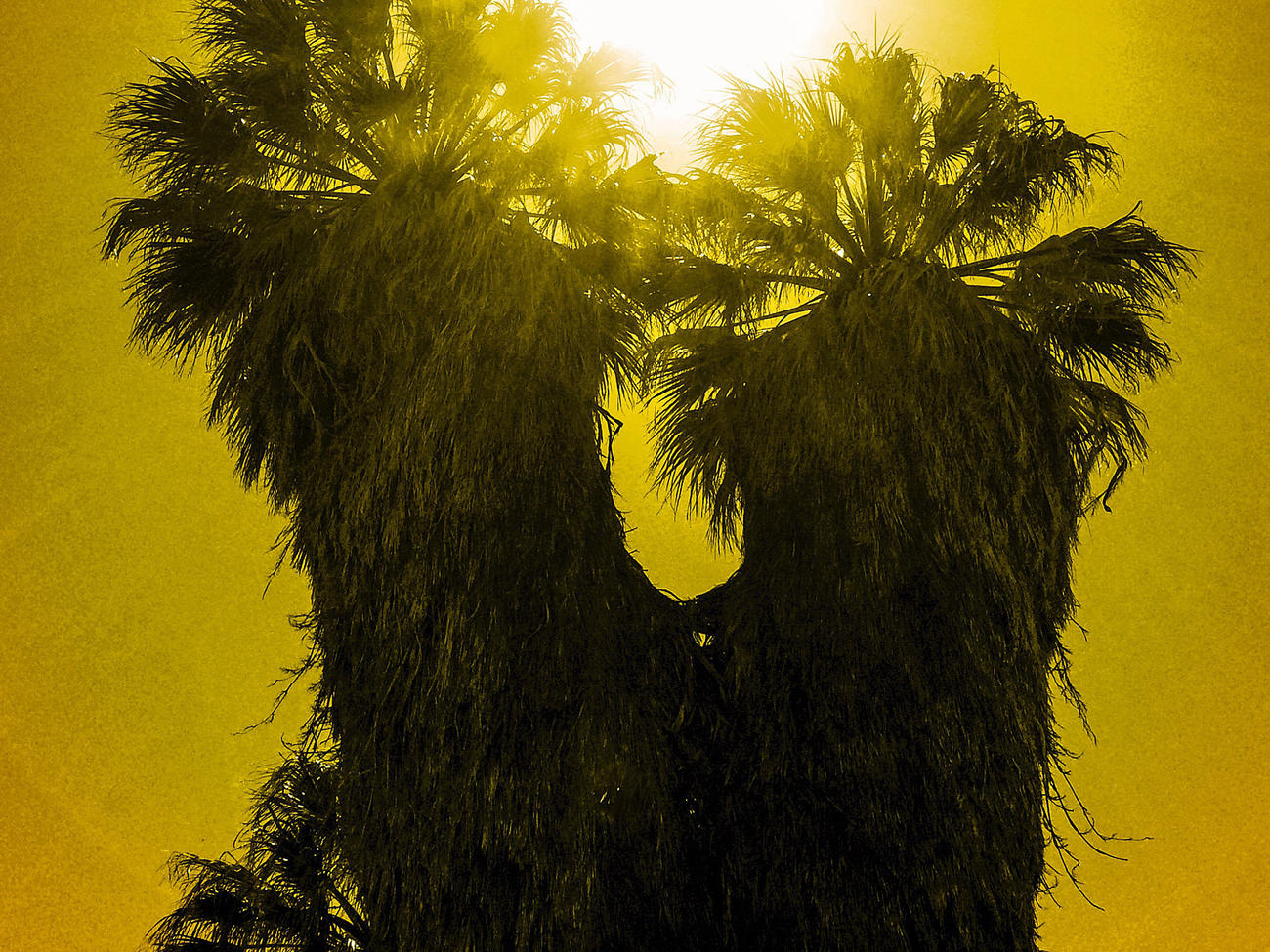 YOUR BEST DAY IN THE PARK

Learn about the park. Take a look at exhibits on the park’s human and natural history at the Oasis Visitor Center before a quick stroll along the nature trail in the Oasis of Mara, site of an early Serrano Indian village and later a Chemehuevi Indian settlement. In April, the visitor center hosts a show featuring works by the many artists who live in the Joshua Tree area. 74485 National Park Dr., Twentynine Palms; nps.gov/jotr or 760/367-5500.

A haven for both early Native Americans and then cattle and horse rustlers who took advantage of its seclusion, Hidden Valley is tucked into a bowl surrounded by high walls of boulders. An easy 1-mile interpretive trail offers a look at the valley’s terrain and human history, and you might spot rock climbers. Nearby Hidden Valley Campground also has a number of top climbing routes.

Explore Hidden Valley. Ringed by tall stacks of boulders, Hidden Valley is a secluded spot with an easy 1-mile interpretive trail. Look for rock climbers on the valley’s walls, or walk a short distance to Hidden Valley Campground, a major climbing staging area with prime routes. For another short walk, a connector leads from Hidden Valley to the 1.3-mile Barker Dam Nature Trail, where you can see Indian petroglyphs and a small reservoir set in the rocks behind the historic dam. nps.gov/jotr or 760/367-5500.

Drive out to Keys View. Stop at Cap Rock, a distinctive formation that’s associated with the death and bungled cremation (it’s a long story) of country rock pioneer Gram Parsons, a onetime member of The Byrds and The Flying Burrito Brothers. Parsons loved Joshua Tree and came out and scanned the skies for UFOs with Rolling Stone Keith Richards. The cremation site is actually several hundred yards away but fans, much to the chagrin of the park service, have turned Cap Rock into a Parsons shrine. Continue another 5.3 miles to one of Southern California’s definitive overlooks: the desert panorama from Keys View, where sunsets are spectacular. nps.gov/jotr or 760/367-5500.

YOUR BEST 3 DAYS IN THE PARK

Hike into the Wonderland of Rocks. Starting from the Keys West backcountry registration board along Park Boulevard, the 6-mile roundtrip hike on the Boy Scout Trail to Willow Hole leads through an impressive Joshua tree forest. After about 1.3 miles you arrive at a junction, where you go right before entering the intricate formations at Wonderland of Rocks. In about 1.2 miles, the trail reaches a wash and from here you’ll follow the boot prints to reach Willow Hole, where there’s a pond set among the boulders. nps.gov/jotr or 760/367-5500.

Step into the Past. Make reservations at 760/367-5522 for tours ($10) of Keys Ranch, a historic homestead where rangers will bring alive the story of Bill and Frances Keys. The ranch has a schoolhouse and a restored orchard, and there are also old trucks and mining equipment scattered around the property. Tours run from February into mid-May and take place Sundays at 10 a.m. and at 2 p.m. Wednesdays, Fridays, and Saturdays. nps.gov/jotr or 760/367-5500.

Pick up an interpretive guide and head out on the 18-mile Geology Tour Road, where the 16 stops along the way will introduce you to different aspects of park geology, including the formation of monzogranite rock and earthquake faults. Two-wheel-drive vehicles can go as far as Stop 9 at Squaw Tank but you’ll need a four-wheel-drive vehicle past that point because of soft sand. www.nps.gov/jotr/planyourvisit/geology-motor-tour.htm or 760/367-5500.

Take a driving tour. Head out on the 16-stop, 18-mile Geology Motor Tour, a backroads journey into Joshua Tree’s complex geological history. An interpretive brochure is available to explain the processes that created this landscape. Standard, two-wheel drive cars can reach nine stops before the going gets too rough for all but high-clearance, four-wheel-drive vehicles. nps.gov/jotr or 760/367-5500.

Try rock climbing. Those stacks of monzogranite boulders aren’t just cool to look at.  Plenty of people believe that Joshua Tree, with its 8,000 or so routes, offers some of the best rock climbing anywhere in the world. Enthusiasts come here to try traditional crack, slab, and steep-face styles, so if it all looks intriguing, contact one of the local climbing schools to begin learning proper technique. Good bets include Cliffhanger Guides (cliffhangerguides.com; 209/743-8363), Vertical Adventures (vertical-adventures.com; 800/514-8785), and the Joshua Tree Rock Climbing School (joshuatreerockclimbing.com; 800/890-4745). For general info, visit www.nps.gov/jotr/planyourvisit/climbing.htm.

The coarse texture and endless cracks and edges in Joshua Tree’s monzogranite boulders create righteous conditions for rock climbing. With 400 formations offering 8,000 different routes, you’re bound to spot climbers inching their way up rock faces throughout the park. Ready to defy gravity yourself? Learn the basics from such local experts as Cliffhanger Guides (cliffhangerguides.com; 209/743-8363), Vertical Adventures (vertical-adventures.com; 800/514-8785), and the Joshua Tree Rock Climbing School (joshuatreerockclimbing.com; 800/890-4745). Or between 8-10 a.m. on Saturdays and Sundays from mid-October through April, bring your mug for Climbers Coffee at Hidden Valley Campground to get the inside scoop from the park’s climbing ranger. nps.gov/jotr; 760/367-5500.

Hike Ryan Mountain. If the prospect of dangling on a rope along a cliff face is a bit too much, you can still feel like you’re on top of the world by hiking to the summit of 5,456-foot Ryan Mountain. The peak takes in a commanding view from the center of the park and is definitely worth the 1,100-foot climb on a 3-mile roundtrip trek. nps.gov/jotr or 760/367-5500.

Look up at the stars. Joshua Tree area doesn’t exactly have a reputation for nightlife. But desert skies are ideal for stargazing, so head out to an open area with a mostly unobstructed view and simply look up to marvel at the Milky Way and other celestial features. Or take a free ranger-led Full Moon Tour on the weekend before the monthly full moon. Reservations (760/367-5522) open two weeks ahead of time. nps.gov/jotr or 760/367-5500.

Drive Pinto Basin Road. Most visitors never get past the main areas of Joshua Tree, but a road trip down Pinto Basin Road shows off a different side of the park as the terrain transitions from the Mojave to the Colorado Desert. From the Joshua Tree Visitor Center, it’s a 58-mile drive to Cottonwood Visitor Center, so stretch your legs on the nature trail that weaves through Cholla Cactus Garden and keep your eyes open for wildflowers and stands of blooming ocotillo along the road. nps.gov/jotr or 760/367-5500.

Picnic at an oasis. Take a look around the Cottonwood Visitor Center then trek across the open desert to the cool, shaded haven of Lost Palms Oasis, the largest stand of native California fan palms in Joshua Tree. Roundtrip is a fairly level 7.2 miles, but if time is tight, explore Cottonwood Spring, another palm oasis just past the visitor center. nps.gov/jotr or 760/367-5500.