Whether you carve up the waves or watch from the sand, Huntington Beach will work its classic beach-town charms on you 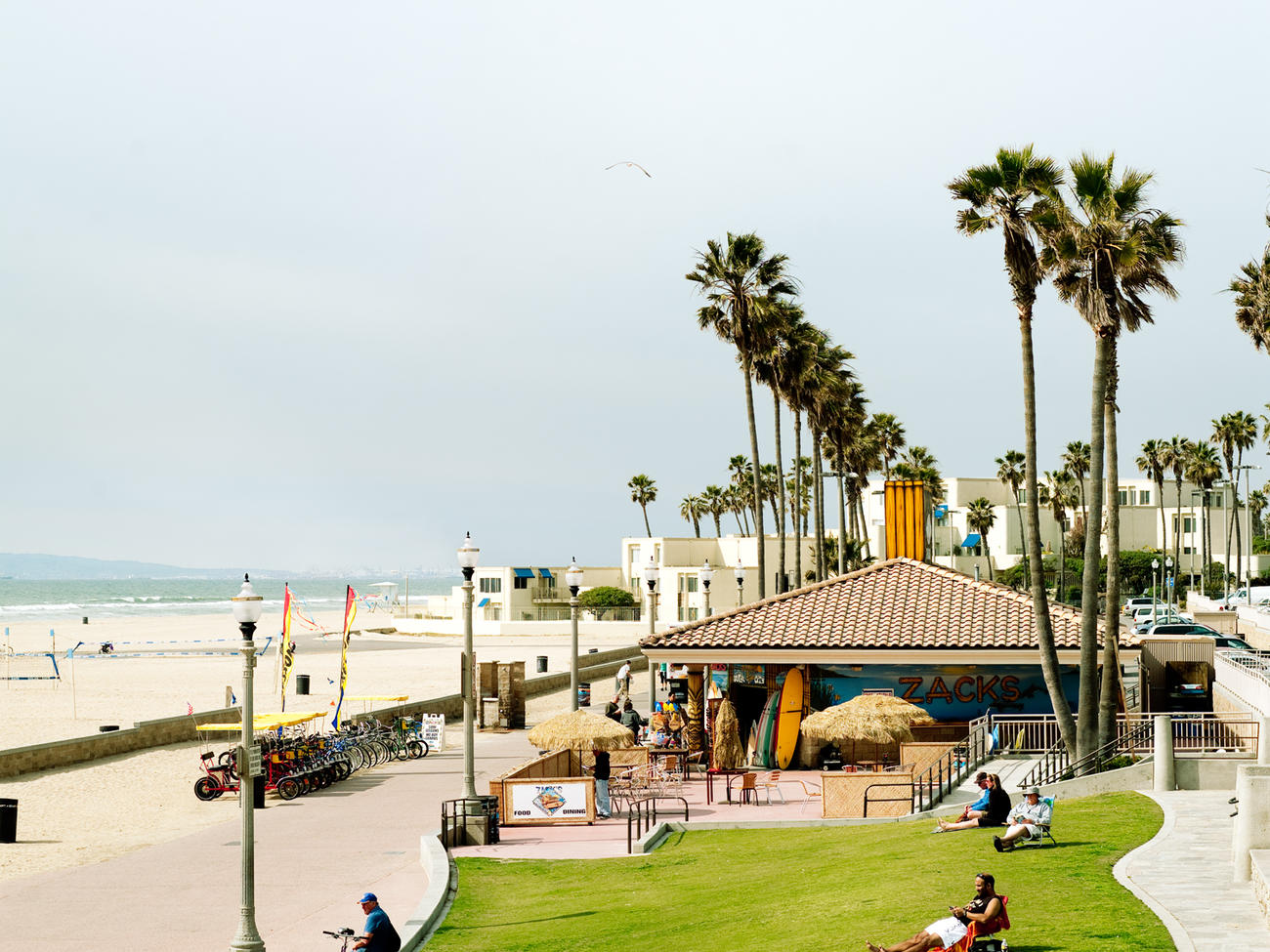 Take a lesson: The surf butler at Shorebreak can arrange it. (Or something chill like a kite rental.) Surf conditions are posted near the front desk.

Watch the pros: The US Open of Surfing is August 2–8, when the world’s best compete for titles. Fair warning: H.B. becomes crazy town. surfcityusa.com

Andrea M. Gómez
Heading out to meet the waves in Huntington Beach.

How to worship the wave

I’d never had the occasion to flip through the Riptionary before. In fact, I’d never even heard of the Riptionary—a kind of Dummies guide to surf lingo—before I went to Huntington Beach one summer weekend.

Long story short: Boyfriend grew up there. Ex-surfer. Family visit long overdue. Me … no surf. Shudder in cold Pacific water. Love boyfriend. And intrigued by a culture where the ocean is god.

Plus, big bonus: the new-ish 157-room Shorebreak Hotel, which stylishly woos visiting surfers (and non) who want to lounge in the courtyard by a firepit or scope out the waves from their private balcony.

Determined not to be the Riptionary definition of an ass clown*, I first go for my own Surfing 101. I walk out past the hotel’s surf lockers, past beach cruisers with palm trees painted on the rims, and up two blocks to one of H.B.’s few remaining historic buildings (McCondoville struck early here, and didn’t let up)—a building that now houses the Huntington Beach International Surfing Museum.

A few Russians and I are the only ones wandering the wee space on this sunny Saturday. The narration from cult classic The Endless Summer plays in the background. B&W photographs show the sport’s heroes through the years, and an exhibit on board shapers displays the first efforts—9-foot boards made from solid redwood.

With more surf knowledge, I feel ready to head to the culture’s main altar: the town’s famously long pier, where the most consistent waves are ridden.

On my way down the busy main drag, I note that the ocean is a very informal and accepting god—its acolytes wear not much more than expensive sunglasses and short shorts. One, with a marijuana leaf tattooed on his ankle, proclaims the day to be “sick.” (See the Riptionary if you think that’s a bad thing.)

Epiphany on the sand

The ex-surfer with family ties to H.B. meets me near lifeguard station #2. We’re sitting in the sand, watching kids slide down mini “dunes” on bodyboards, when he perks up—like he hears a high-pitched noise only a surfer is attuned to and I’m not.

He turns to me with a smile. “Surf guitar,” he says.

“Surf guitar?” I vaguely remember something about this from the museum. But I don’t have my Riptionary on me. “There’s a special guitar?”

He grabs my hand and leads me across the well-trodden sand to the source of the sound: a stage fronted by people on the grass in the warm sun.

A guy with what sure looks like a regular old electric guitar plucks out a retro beat.

I get it then. The plucking mimics the rhythm of the ocean. I’ve heard it before but didn’t feel it until now, with the surfers behind me riding the waves. As I look back toward town across Pacific Coast Highway, the music opens my eyes to something else: Huntington Beach didn’t completely flush its past during the development decades. Between the new buildings are palm trees, a few old cottages, and burger shacks. Throaty-sounding classic cars cruise PCH alongside F-150 trucks. The music makes me see only the classics.

Including the black standard poodle who just then strolls by, with a pink frangipani behind her ear and an aloha shirt (and her owner attached on a leash). The Beach Boys’ California is still alive. And it’s sick.

That evening, we have dinner at Shorebreak’s Zimzala restaurant. The Riptionary defines a “zimzala” as a free-spirited person who finds peace with the sand between her toes.

I’m a convert. An ocean worshipper. But, hear me now: No short shorts or pot tattoos. A surf lesson? In time.