The Best Towns in the West for Killer Trick-or-Treating

These festive cities pull out all the stops to deliver a spooktacular Halloween experience with haunted yards, major candy hauls, and tricked-out homes. Did your hometown make the cut? When Halloween rolls around, there’s no shortage of pumpkin patches, haunted houses, and eerie events to hit up. More advanced thrill-seekers may prefer to check into a haunted hotel or visit a horror movie set location. But for families, nothing tops the good, old-fashioned tradition of trick-or-treating. That’s why we scoured the West to find the best places to trick-or-treat this year. All of these towns embrace the spooky, sweets-filled fun of the holiday: they have neighborhoods that go above-and-beyond on the lawn decorations, festive locals who love to dress up, high walkability, and an all-around spirited vibe. Your pillowcase will runneth over. Boulder’s wide, mostly pedestrian, shop-filled Pearl Street turns into candy-palooza for the Munchkin Masquerade on October 31. Hundreds of families descend on the downtown thoroughfare as more than 100 shopkeepers hand out buckets of sweets and offer additional treats, like face painting and mini haunted houses. It’s one of the best places to trick-or-treat in Colorado, hands-down.

For more than 50 years, the historic Mount Vernon Avenue in Prescott (a dream of a place to live) has consistently hosted one of the most festive Halloween celebrations in the Southwest. The entire street gets shut down for the afternoon trick-or-treating marathon, where costumed homeowners (some of whom have lived in this neighborhood their entire lives) dole out the goods from their decorated Victorian houses. Locals throughout the city donate candy to Mount Vernon residents to ensure the loot never runs out. 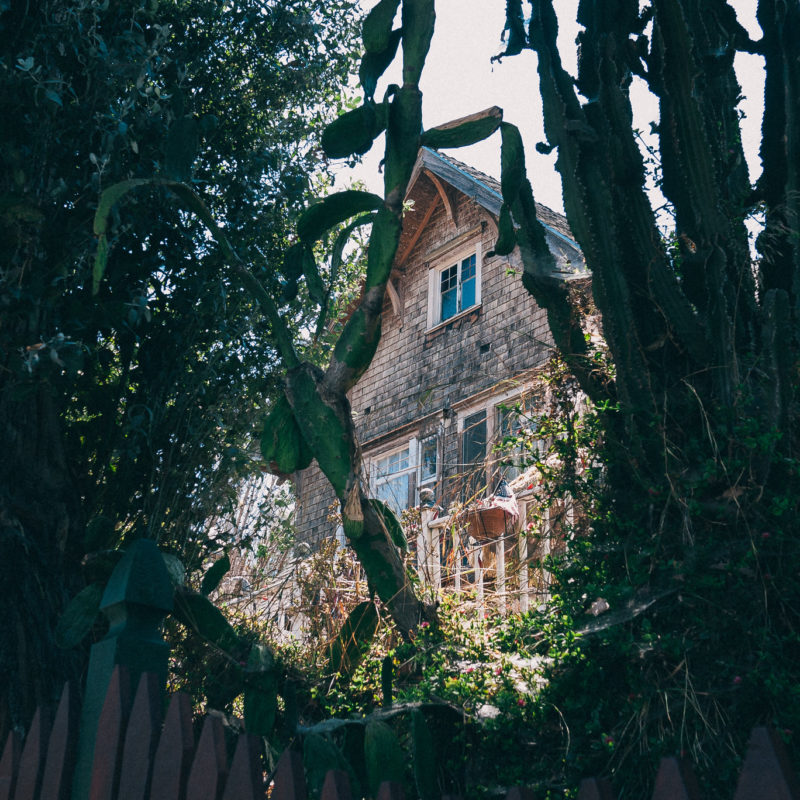 Los Angeles neighborhoods pull out all the stops to entertain little monsters. If you and your clan can handle some hills, head straight to Angelino Heights (pictured), where restored century-old homes and costumed residents set the scene. Eagle Rock, in Northeast L.A., is full of creatives that deck out their lawns with (tasteful) skeleton, ghoul, and cemetery scenes. Meanwhile, the showbiz veterans who live around Toluca Lake tend to lean over-the-top with their decor and treats—a tradition established by Bob Hope, who reportedly gave out full-sized candy bars and toys when he lived in the area. Toluca is ritzy with large lots, but the area is still walkable. Other Halloween hotspots include Beverly Hills’ Walden Drive (home to the famous “Witch House”), South Pasadena (where the original Halloween house is located), and Sierra Madre’s Alegria Street (which draws up to 10,000 people a year for its elaborate displays). St. Helens embraces its heritage as the location for Disney’s Halloweentown movie with a month-long festival. The town square already looks plucked out of the classic ’90s spooky film with its brick buildings, leafy plazas, and cobblestoned streets. But the cinematic factor is amplified with decor that replicates the movie set (think: lots of pumpkins). Stars from the movie make appearances throughout the month, along with haunted tours, magic shows, parades, and psychic readings. Halloween brings a big trunk-or-treating event (it’s like the tailgating version of trick-or-treating) to the local police station.

Between the Boo at the Zoo to-do, the Downtown Billings Alliance’s trick-or-treat event, and the Nightmare on Thirsty Street brewery bash, there is tons of ghoulish entertainment in this Yellowstone gateway town. But of all the great places to trick-or-treat in the city, the North Elevation neighborhood takes top honors. Anchored by the creepy (and allegedly haunted) Moss Mansion, the neighborhood—which recently got listed on the National Register of Historic Places—is renowned for its spooky decor. The flurry of activity is concentrated on Clark Avenue. Locals return year after year to see the iconic houses and stock up on treats. Creative Commons photo by Mitch Lorens is licensed under CC BY 2.0

Vegas gets all the attention for its racy Halloween festivities, but for families looking for the best places to trick-or-treat in Nevada,  Carson City, near Lake Tahoe, is the way to go. Carson Mall and Nevada Discovery Museum both bill its trick-or-treat events as “safe,” meaning clean fun in a patrolled setting. However, you’ll get the biggest haul at the Downtown Candy Crawl, where dozens of vendors shower kiddos with sweets. But really, the entire town gets in on the fun—even the governor and his wife hand out candy at the decorated Governor’s Mansion from 5 to 8 p.m. on Halloween night. 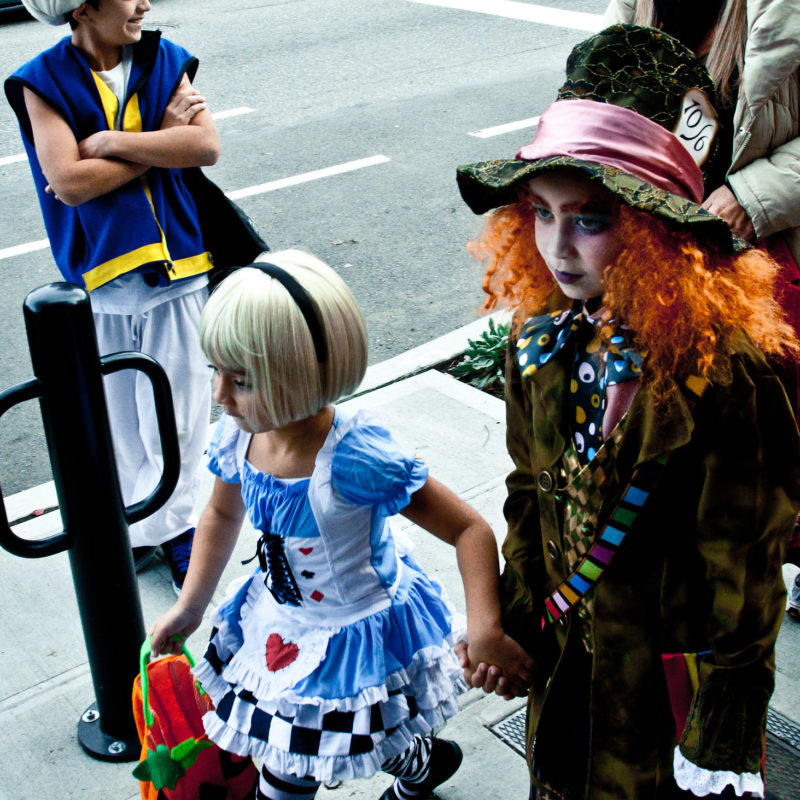 Creative Commons photo by Chris Blakeley is licensed under CC BY 2.0

Seattle loves Halloween. Right in the city center, the Capitol Hill neighborhood puts on an epic Hilloweencarnival, which gets followed up with three hours of trick-or-treating up and down Broadway. The surrounding streets follow suit with flashmobs, theatrical decorations, and thousands of candy-hunters. Elsewhere in the city, Queen Anne Avenue’s merchants’ association creates one of the best places to trick-or-treat, with stores giving out candy and volunteer crosswalk guards keeping kiddos safe. And in the Montlake, a.k.a. “Hauntlake,” neighborhood, folx gather to design the elaborate Trick or Treat House display. There are plenty of bonbons to go around, but Montlake also invites guests to donate to a food drive, which runs all month.

ABQ is all about the boos with dozens of events taking place the week of Halloween. For trick-or-treating proper, Old Town hosts a picturesque setup with its pretty plaza and mom-and-pop shops that dole out treats. San Gabriel, in the northeast section of the city, recently got recognized for the neighbors’ fervent commitment to the holiday with decked out lawns and stocked candy bowls. Those who don’t like going door-to-door can choose from a few trunk-or-treat events, like the one at Balloon Fiesta Parkor the vegan version at the First Unitarian Church of Albuquerque. Along with San Francisco, San Jose is one of the Bay Area towns that top Zillow’s list of best places to trick-or-treat in the country—based on a survey that looks at towns with high home values (wealthier people tends to mean more and better candy), houses that are close together (less walking), and lots of kids under 10. This year, you won’t want to miss the Trick or Treat Trail at the quirky Winchester Mystery House. On the neighborhood front, look at Willow Glen and Cambrian Park. More than 100 shops participate in the daytime Montana Avenue Halloween Hop, where little superheroes and monsters can load up on treats along the 10-block stretch. Afterward, families drift toward the decorated homes in the surrounding Santa Monica areas north of Montana, where the vibe ranges from mellow to block party-like in one of the best places to trick-or-treat in Southern California.

Monster Bashes, Thriller Dance-Offs, and More at the Best Halloween Events in the West