A growing movement believes that in order to enjoy life to its fullest, you need to do some things the old-fashioned way (translation: technology-free) 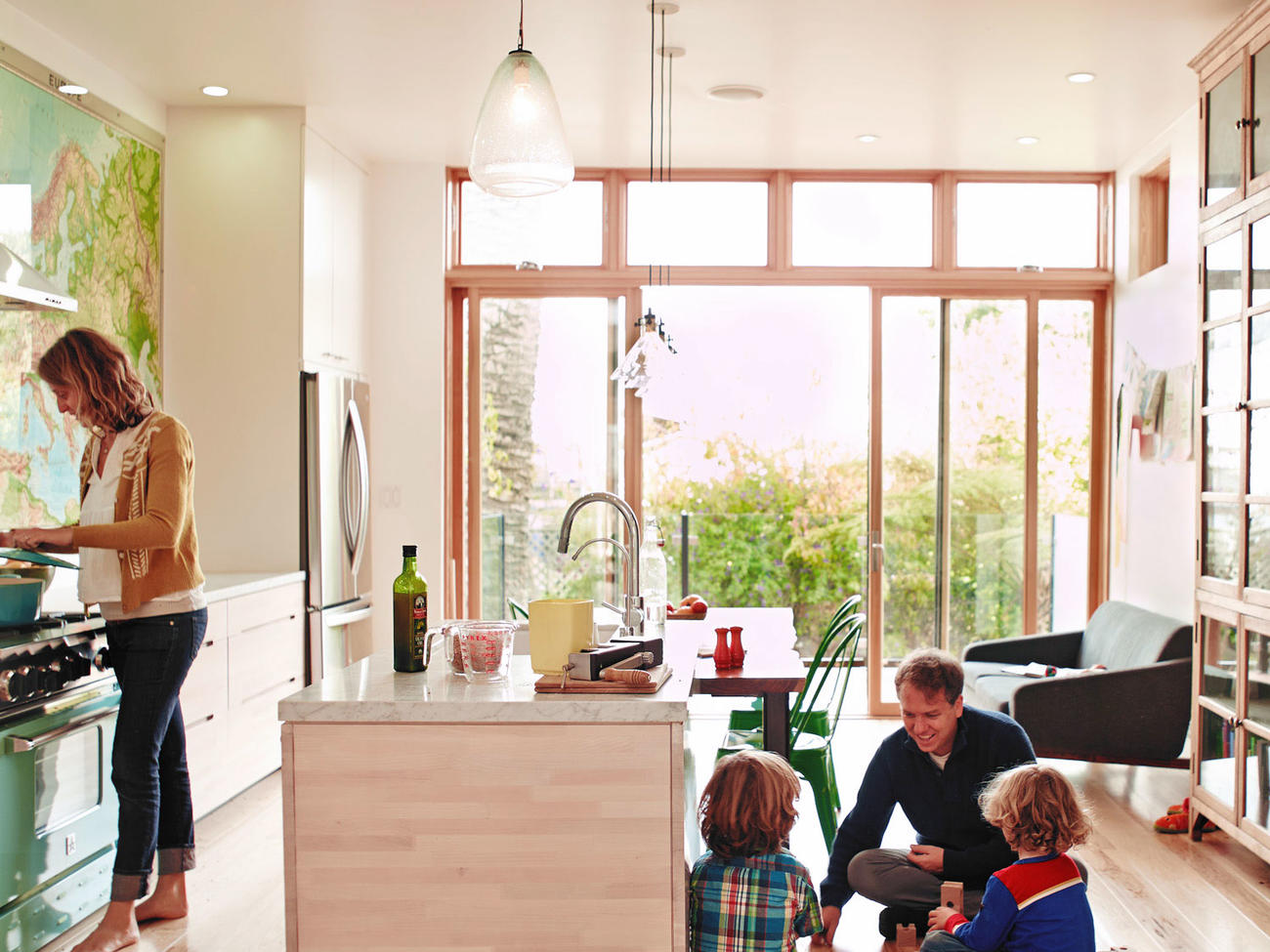 The first thing you notice about the San Francisco Mission District home of Laura Jo Wegman and Donovan Corliss is that there seems to be an awful lot of space. Wall space, counter space, floor space. It’s as if something is missing. Like TVs, video games, laptops, smartphones, and iPads. That’s because Wegman and Corliss have designated their home a technology-free zone. Their kitchen boasts a basic fridge, dishwasher, and stove—all with no LED interfaces. The phones are rotary dial, and even the clocks are analog, like the 1940s schoolhouse clock they restored with sons Lev, 4, and Ezra, 6, before displaying it in the kitchen.

“I’ve never been into screens and displays and flashing lights. I find them distracting from the things I really care about,” explains Wegman, design director of the organic home-textiles company Coyuchi.

“I think TV and Internet and phones become such a time suck that people feel that they don’t have time for anything else,” says Corliss, a developer for the San Francisco Municipal Transportation Agency. “They don’t have time to do artwork with their kids or read books or have a conversation with one another.”

Corliss and Wegman always tended toward a low-tech lifestyle but became even more invested after Ezra’s birth. Since minimizing technology in their home, Corliss says that he feels restored. “I feel like I can be more present and that I’m more refreshed.” He says he even sleeps better.

Sure, maybe they get “some eye rolls” when people come over, but what they also get is time. Time to read The New Yorker in its entirety every week; time to bake bread from scratch; time to take their kids hiking and biking.

Wegman and Corliss are at the purist edge of a technology backlash that has been gaining momentum over the past few years. The idea? Unplug yourself and reconnect with an analog way of life. Oddly, the epicenter of this movement is the San Francisco Bay Area, also home to the tech-saturated Silicon Valley, where a smartphone is practically a requirement for residency.

But what “unpluggers” like Corliss and Wegman have decided is that technology, despite its promises to improve our lives and make it more efficient, often distracts us from more meaningful interactions. At the heart of the unplugging movement is a desire, à la Thoreau, to get back to a purer way of living: to rediscover hobbies, use your hands, get outdoors, have a conversation that isn’t mediated by bits and bytes.

Although technology frees us up, it does so almost to a fault. It actually takes us away from the physical act of doing anything, Wegman says. So, for example, she and Corliss grind their own flour for pancakes, then flip through a print edition of the newspaper over a hot breakfast.

The most visible manifestation of the unplugging movement has been the National Day of Unplugging, which started in 2009; and the related Technology Shabbat movement, which advocates a 24-hour digital hiatus every week. Filmmaker and Mill Valley, California, resident Tiffany Shlain started using the phrase “Technology Shabbat” in 2008; in 2010, she decided she wanted to practice it more deeply, after realizing she was inundated with technology. At the time, her father was dying and alert only one hour a day. “During that hour, I would turn off my phone and focus on him,” she recalls. “I began to think a lot about how to be present with the people we live with.”

Every Friday night, Shlain’s family now powers down all their cell phones, laptops, and TVs. Where Saturday mornings used to be fragmented and solitary—the kids watching TV, the parents consuming email with their coffee—it’s now their favorite day of the week, filled with gardening, hiking, and writing (longhand) in journals.

“It’s a deliciously long day,” Shlain says. “Technology speeds up time, and time is relative to your state of motion. When you are moving so quickly with all these devices, time passes really fast.”

Three years into her experiment, Shlain has motivated thousands of others nationwide to start their own Technology Shabbats, many interpreting the term with their own rules and boundaries. But the common refrain that she hears from everyone? “They feel they got their balance back.”

Many unpluggers, like Shlain, begin the technology power-down after having kids, concerned about the impact of ubiquitous technology on developing minds. This was also true for the Corliss/Wegman family. They wanted their kids to have a tactile and immersive childhood. Instead of video games, the family plays board or card games. Ezra and Lev enjoy classic toys like marble runs and wooden trains. In the kitchen, they experiment with old-fashioned cooking gadgets like flour grinders, a hand-crank ice cream maker, and a handpress juicer. Upstairs are two “art studios”—one for the kids, one for Wegman—crammed with imagination-inspiring supplies, the fruits of which decorate every wall of their house.

Thomas J. Story
An alternative to TV: Ezra draws in the boys’ studio.

“I don’t think of it so much as subtracting as adding,” Corliss explains. It’s as if eliminating the physical clutter of cords and monitors has freed up more empty room in their minds for creativity.

Many of the pleasures of their low-tech life are simple ones that are frequently lost in the hustle of digital living. The daily subscription to a print newspaper, for example. And when friends come over for dinner, conversations tend to linger, uninterrupted by cell phones, while the kids build forts, put on puppet shows, or kick a ball around outside. “We have dinner without the TV and the Internet, and this blinking and that going off. I can complete a whole phrase and idea,” Wegman says.

Still, both parents insist that they aren’t puritans. Both own laptops and iPhones, lightly used for things like Google Maps or booking flights online (at a minimum in front of the kids, though, because they like to keep the home space pure). They even have a TV stashed on the floor of their closet, which gets pulled out of hiding every two years. “I’m an Olympics junkie,” Wegman confesses. But do they miss technology in their home? Not at all.

Okay, maybe a little: “Heating up milk for the children, in a pot at 3 in the morning?” Corliss recalls. “Oh my goodness. I wished I had a microwave.”

Here’s what others are doing––and what you can try––from easy to hard-core.

National Day of Unplugging. Who’s behind it: Reboot, a Jewish arts organization based in New York. What it is: Unplug all your devices from sunset to sunset on March 1–2, 2013. Insight: In its fourth year, the National Day of Unplugging has participants from around the world turning off their TVs, phones, and computers for 24 hours. “This is the zeitgeist of the moment,” says NDU spokeswoman Tanya Schevitz. Reboot also wrote the Sabbath Manifesto’s 10 principles. nationaldayofunplugging.com

Walden Zones. Who’s behind it: William Powers, author of Hamlet’s BlackBerry: Building a Good Life in the Digital Age (Harper Perennial, 2011; $15). What it is: Designate space in your house as a tech-free zone. Put a basket at the door for cell phones. Insight: “In the beginning, we had total withdrawal, which made us realize how addicted we were,” recalls Powers.  “After a few months, we began to realize all these incredible benefits. It’s like adding a room to your house—a space where you can live differently.” williampowers.com

The Digital Detox. Who’s behind it: S.F. Bay Area residents Levi Felix and Brooke Dean. What it is: Retreats in remote Northern California locales without any devices. Insight: Former tech and social entrepreneur Felix launched the Digital Detox after he ended up in the hospital due to a stress-related condition. “When I got out, I started reevaluating everything,” he says. At his monthly Detox, participants ditch all gadgets for long weekends of activities like cooking and hiking. He also holds device-free gatherings in San Francisco. thedigitaldetox.org

Technology Shabbats. Who’s behind it: Tiffany Shlain. What it is: Powering down, usually from sundown Friday until sundown Saturday. Insight: “It’s definitely harder to make plans, and we have to print out our schedules the day before,” Shlain says, laughing. “Instead of sending 10 texts to coordinate, we just show up. If we’re late, there will be no cell phone call. It’s the way everyone used to do things.” tiffanyshlain.com

Unplug your house. Who’s tried it: The Wegman/Corliss family. What it is: Keep technology at a minimum in your home. Insight: People have visited the house, Wegman says, and talked about how “they should” do this. But she doesn’t know anyone else who has tried it yet.

Give up your smartphone. Who’s tried it: Northern Californian Andrew Tyree. What it is: Give up your app-filled smartphone for something simpler. Insight: As a restaurant worker, Tyree was irked by people’s preoccupation of texting and tweeting during meals. He realized he was no better and switched from his smartphone to an app-less flip phone. He finds that he’s more engaged in the moment and now knows his city, San Francisco, better since he no longer has Google Maps.

Read these books: Alone Together: Why We Expect More from Technology and Less from Each Other (Basic Books, 2011; $17) by Sherry Turkle. Explores how excessive digital connection leads to solitude. Also, Hamlet’s BlackBerry by William Powers (see “Walden Zones,” above). Through technological history and the likes of Shakespeare and Thoreau, discover why it’s so important to disconnect regularly.

Watch this DVD: Connected, directed by Tiffany Shlain. A film about what it means to be connected in the 21st century. $25; connectedthefilm.com

Change settings: Do Not Disturb (on iPhones) blocks all calls, texts, and notifications from coming through. You can schedule the setting for certain times too.