How to Make Art the Star in Your Home Decor

For one creative couple in San Francisco’s Mission District, home is the ultimate canvas

Even in a city full of candy-colored houses, artist Windy Chien’s San Francisco Victorian stands out. In the front, it features an ombré exterior that shifts from yellow to red; in the back, it morphs from yellow to green to bright blue. The design is as attention-grabbing as it is symbolic of her general outlook: “I believe in being super-omnivorous,” says Chien, whose various callings have included 14 years as the owner of an independent music shop and a near-decade stint as a product manager at Apple. These days, she’s a full-time fiber artist and wood-carving teacher, an about-face she initiated four years ago. “I don’t think I want to ever do just one thing.”

Inside, her home is “a patchwork of past lives,” says Chien, who shares the top two floors with her boyfriend, advertising copywriter Gary L. Baker II (the garden unit is occupied by a friend, with whom she purchased the building in 2010). In a nod to her Silicon Valley history, Chien’s macramé fiber art pieces—hanging on walls alongside vintage instruments and her grandmother’s needlepoint—recall the architecture of circuit boards. Her rope light pendants, draped in the living room, evoke the double helix structure of DNA.

“As an artist, I appreciate the beauty in things that we tend to think of as primarily functional,” she says. Which may be why she preserved a bare plaster wall in the main hallway for its unique cracked texture, or why she used the spiral staircase railing as a testing ground for her 15-foot-high Twisted Planes rope installation (now on display at a local tech company).

On some level, even Chien’s greyhound, Shelley Duvall, appreciates the design m.o., often settling into the most comfortable spots in the house at the moment they’re also the most beautiful. For instance, around 4 p.m., she heads to the guest room, when sunlight shines on the bed. “We don’t call it Casa Greyhound for nothing,” says Chien, laughing. Cap off the Room

Collected and deeply personal, the living room showcases family heirlooms, including antique instruments and Chinese porcelain vases. Baker’s artwork, inspired in part by Keith Haring, is a modern counterpoint to the older objects. Completing the look is a gray ceiling. “It’s like a hat for the room,” says Chien. “The perfect finishing touch.”

Chien repurposed the home’s original wood—removed during a remodel of the attic several years ago—as open shelving in the kitchen. There, she stores a bounty of her preserved tomatoes, Le Creuset bakeware, and mason jars of grains and spices. The couple also occasionally compete against each other in cook-offs; in a recent spaghetti Bolognese showdown, Baker took the title.

Stick with One Color

Monochromatic rooms can be visually soothing. The blue tones of the dining area come from a kilim rug Chien picked up on a trip to Morocco, plus a side chair she rescued from the Salvation Army. A medley of art and objects, including work by friend Jeremiah Maddock (the triptych) and a framed taxidermy bust of Chien’s late greyhound, Thin Lizzy, gently disrupt the color palette.

As a child of the ’70s, Chien leans toward graphic patterns. For the guest bedroom, the artist crafted a duvet cover using sheets from the era, reinforcing the groovy look with a shag rug and blanket. “Your house should feel cozy, like a cocoon,” she says. One of Chien’s macramé fiber art pieces hangs above the platform bed, providing a soft focal point. 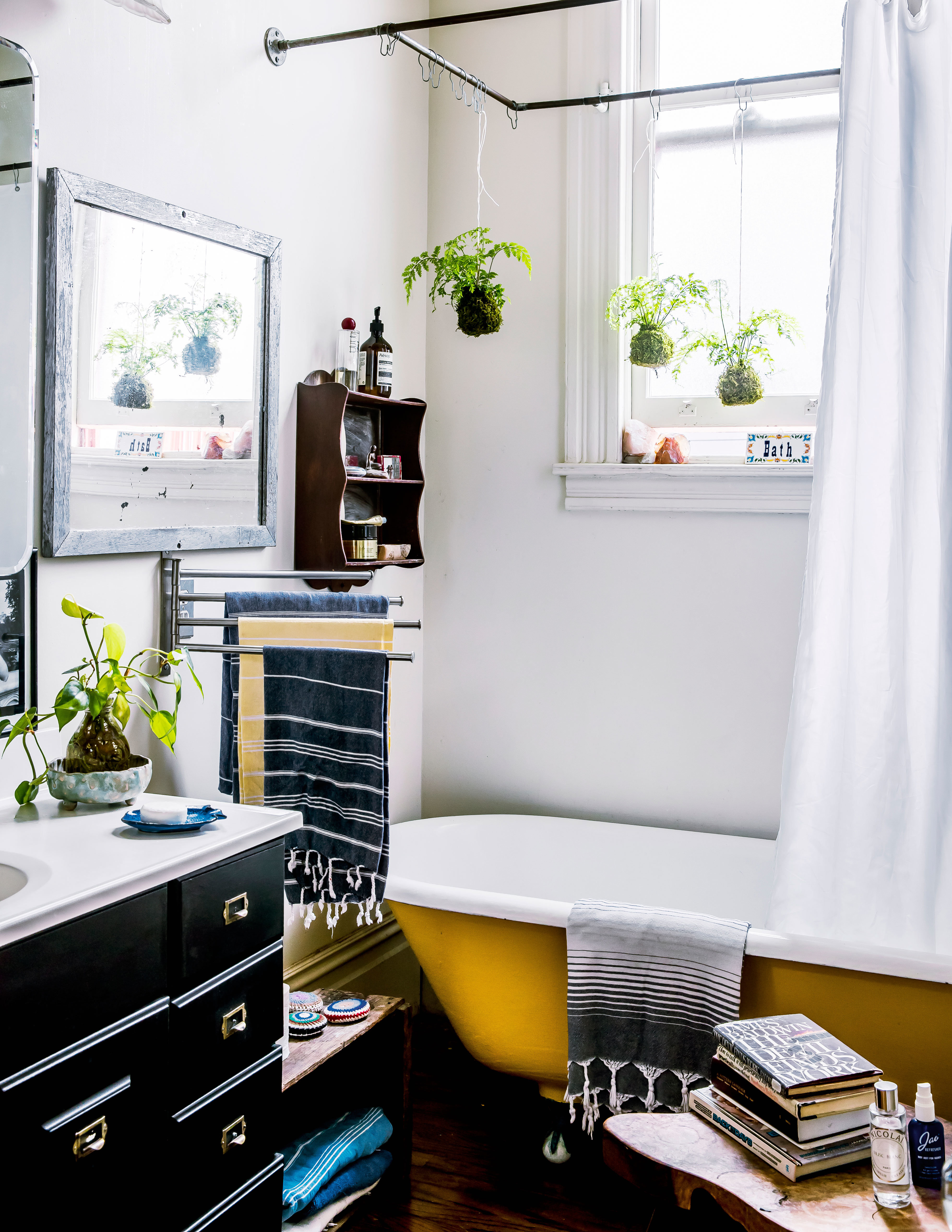 Let the Sun Shine In

Chien painted the vintage claw-foot tub bright yellow. “Bathrooms are usually a good opportunity to do something fun and interesting on a smaller scale,” she says. “Think of it as a testing ground for bolder decorating moves in the bigger rooms of the house.” Art, plants, and ceramics warm up the space too.

An indie spirit suffuses Chien’s home. Here are some of her top sources for furniture and objects that are beautifully crafted, never cookie-cutter.

“One of my favorite shops for vintage furniture is this San Francisco online-only site. The owners reupholster much of their stock in chic, modern textiles. I’ve gotten everything from a couch to a desk there.”

“This Hayes Valley leather-goods atelier is owned by Laureano Faedi. Alongside his handmade bags, he stocks exquisite objects from Japan and South America, like indigo textiles and water carafes made from Coke bottles.”

Decorating Ideas for the Boho Space of Your Dreams

12 Ways to Decorate with Unconventional Art

9 Fresh Ways to Display Your Art