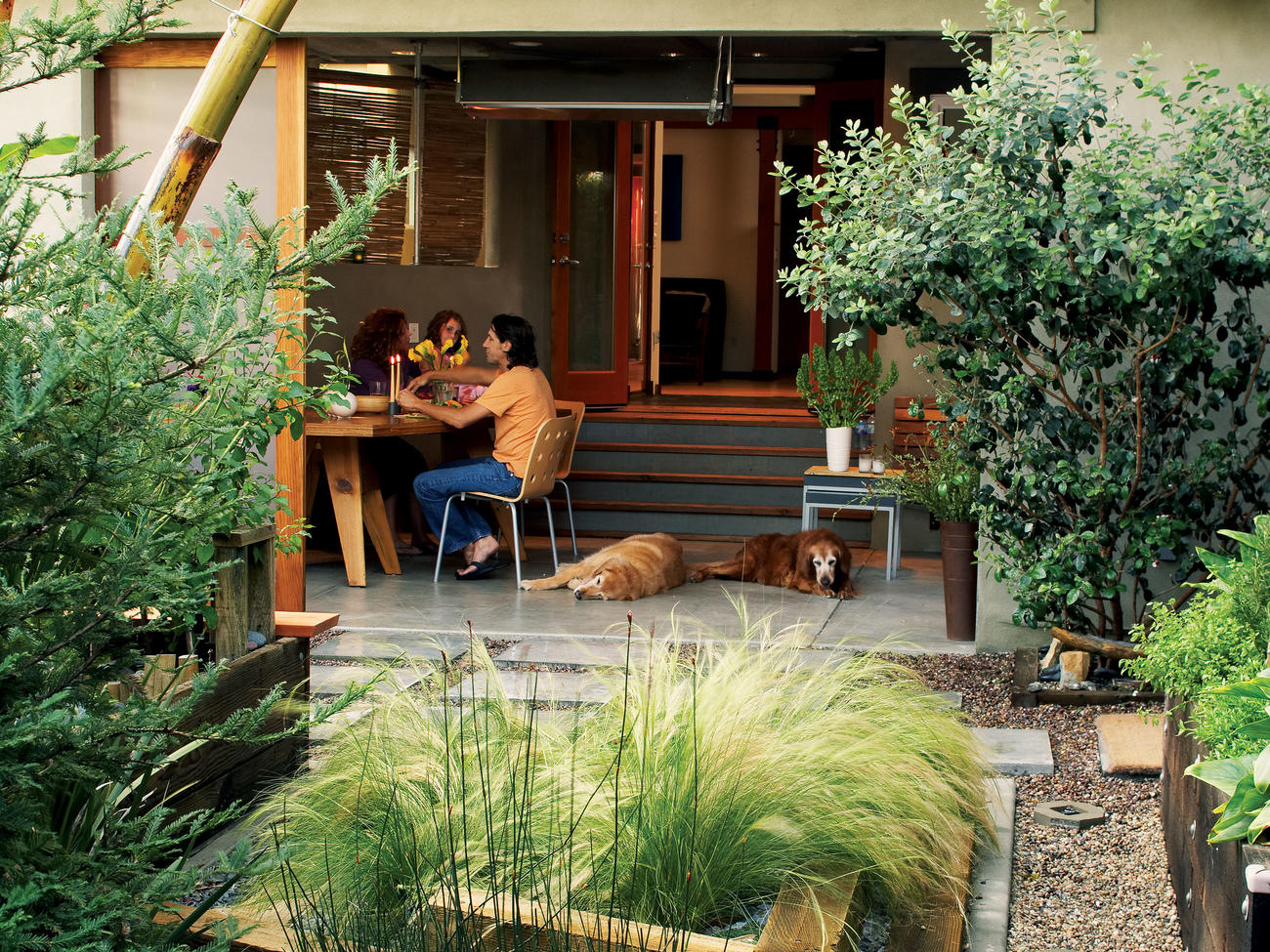 Thomas J. Story
Joe Rivers Altieri with his family in their indoor-outdoor dining space wanted a garden that was visible from every room in the house.
Written by Kathryn Harris March 6, 2006
Share this story

There are fixer-uppers, and then there are complete wrecks. Joe and Kalli Rivers Altieri were determined to put down roots in the desirable beach town of Venice, California.

But given their $300,000 budget, their dream seemed like a long shot ― until the couple found a place that required an absolute leap of faith.

The house, an uninhabitable 1920s shack with no studs or insulation, had served as base camp for 39 squatters and a taco truck. The side yard had been used as an outhouse; the living room was beset with bamboo. Infested with rats, it had been condemned by the city several times over.

“Joe cried when he first saw it, but I always knew it had potential,” says Kalli, an actress. With previous experience as a woodworker on film sets, Joe (who now fronts his own rock band, Piracy) soon came around to the idea of a massive remodel. “We were young, poor, and crazy,” he says with a smile.

Not only did the couple take on the unwieldy project themselves, they also camped out on the property throughout most of the more than four-year process. The first order of business was to apply some much-needed first aid ― erecting poles to hold the roof up, as well as positioning five car jacks under the house to keep it from collapsing. “I wish we could have demoed the lot, but we couldn’t afford to,” Joe says.

Instead, he removed mold- and fire-damaged interior walls and stripped off the exterior wood siding, which he later recycled as beams, baseboards, and door casings. He cut down the indoor bamboo forest and reemployed it in a gallery area above daughter Ocelli’s bedroom.

Next: The footprint stays about the same

The footprint of the 800-square-foot original structure remains largely the same. The kitchen and bathroom traded places, and the roof at the back of the house was raised to 12 feet. A wall was added between the den and living room to form an office.

This office is part of an amazing DIY makeover of a condemned beach shack in Venice, Calif. A short wall was added between the old den and living room to form the space. Color, multiple storage spots, and recycled materials give it warmth and character.

More: Get the full story of this jaw-dropping makeover

A mudroom connects the original house with a two-story front addition. Upstairs is a 440-square-foot master suite; downstairs is the space they call the “lanai,” where a wall of sliding doors yawns open to embrace the entire front garden. “I created several entrances and windows, so you can come and go lots of ways and always have a view of the garden from inside,” Joe says.

For much of the construction, the couple lived in the unfinished front addition, with a hot plate for cooking and a tub for washing dishes. Within two weeks of moving in, Kalli became pregnant with Ocelli, and Joe took work on other job sites until their loans came through. Sharing downtime with Kalli and the new baby was rare. “I missed so many of Ocelli’s firsts,” Joe confesses.

But the results were worth the hardships. The home perfectly expresses Joe and Kalli’s design philosophy: Find creative ways to make the most of what you have. The couple’s proudest moment came during a neighborhood garden tour, when their resurrected shack was featured next to much more grandiose homes. “People’s mouths dropped to the ground,” Joe says. “This is what you can do when you don’t have $2 million.”

Budget constraints make creativity and flexibility essential. According to Joe and Kalli Rivers Altieri, the entire remodel cost approximately $1.05 per square foot ― “without my labor, but I’m cheap,” Joe says.

• Combine mass-market items with splurges. “We mixed Ikea and the Home Depot with more expensive purchases,” Joe says. “More modest materials sometimes work better, like the five-ply bamboo floors from Harmony Grove Company (818/550-0689). They’re more durable and much cheaper than oak floors, which I would have had to treat myself.” The slate in the bathrooms and mudroom came from Santa Monica’s Bourget Flagstone Co. (310/829-4010). “It cost a buck a square, and it’s easy for an amateur to lay because it’s intrinsically uneven.”

• Look for clever ways to recycle. Joe recommends saving materials from around the site. “I’m most proud of pulling the original rough-sawn Douglas fir siding off the house and carefully milling it for beams, doorjambs, trim, and all the baseboards. I also recycled scraps of beautiful black walnut from a previous job and used them for all the interior windowsills, and cedar from a shipping crate for the sliding bedroom and den doors,” he says.

• Maximize outdoor living space. “Given the modest size of our house, we wanted a gardenscape that flowed in and around the property,” Joe says. He created drainage on an almost flat lot by digging gravel-filled trenches. He built raised planters to organize succulents and tropicals into zones with distinct watering systems. “We picked one or two expensive plants, like our Japanese maple, and found cheaper young plants in place of mature expensive ones.”

• Know when to hire a pro. “Don’t stucco or drywall yourself ― someone else can do it better, cheaper, and faster!” Joe says. “Getting help framing the addition was the best money we spent. I painted the outside of the house myself. An electrician buddy gave me a lesson on how to install plugs and can lights. And I hired a neighbor’s kid to help me shovel dirt.”