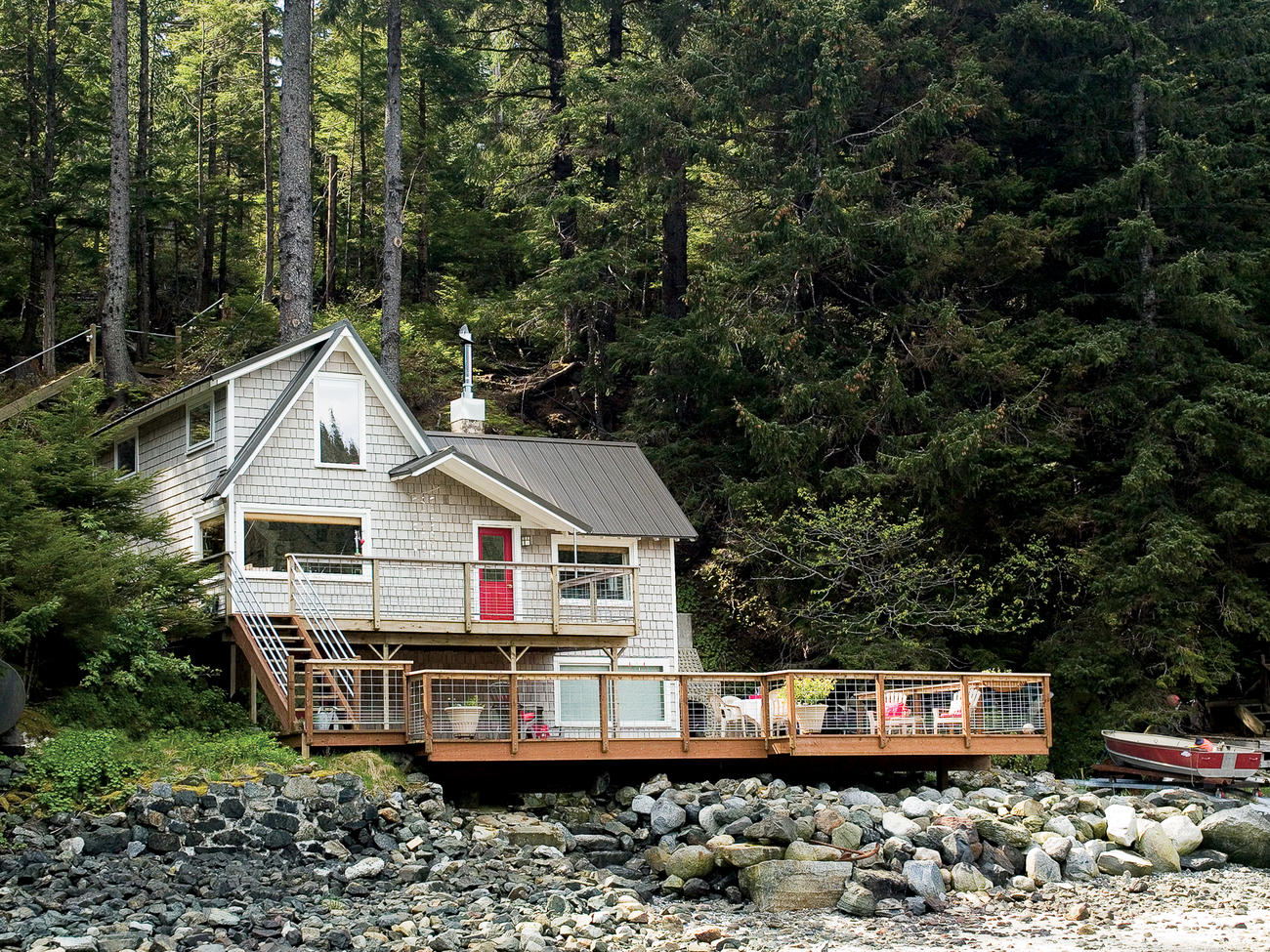 “For sale: small waterfront cabin on a trail. Needs a lot of work.” Something about that ad caught Jennifer Jenkins’s attention. “I kept reading it over and over. I just had a feeling,” she says.

She and her husband, Noah, had recently moved from Montana to Juneau, Alaska, where Jennifer had what was originally a 9-month contract as a speech therapist. The listing was located in Tee Harbor, a cove 18 miles north of Juneau with a sizable population of bald eagles and river otters.

Abandoned for six years, the house was a dump. Its previous owners had left behind moldy bags of clothes and thrown out their furniture in the yard.

The porch had collapsed, the basement walls had rotted, and a hemlock tree was growing through the roof. Apart from the basement, the house measured only 740 square feet ― and the only access was by boat or by hiking down a half-mile trail. Nevertheless, Noah and Jennifer were hooked.

The cabin ― abandoned for six years ― was literally falling apart when the Jenkinses purchased it.

“It was September, and the weather was gorgeous,” Jennifer says. “I remember looking at the view and thinking, How can we make this happen? Our families tried to talk us out of it, but a few days later, we made an offer.”

The couple purchased the home for $110,000, then moved in and embarked on a three-year remodel that cost an additional $35,000. Noah, a carpenter turned firefighter, took on the construction work himself, with Jennifer as his assistant.

First on the list was a monumental cleanup. “It took us weeks just to get rid of all the garbage,” Jennifer says. This entailed piling a 1-ton load of debris on a floating dock and towing it across the cove behind their 14-foot skiff.

Then Noah ripped off the hazardous porch and replumbed the house with the help of a neighbor. He took out a wall between the kitchen and dining room, and stripped the kitchen and bath down to the studs.

Much of the remodel took place in the dead of an Alaska winter, during which the couple, with dog Flannery and cats Merle and Schmitty, spent nights huddling around a space heater. “There were setbacks, but I tried to stay positive,” Noah says. “We’d made a commitment to seeing it through.”

The Jenkinses’ revamped cabin makes the most of its small scale. In the living room, white beadboard walls, exposed beams, and sloping ceilings enhance the snug and sheltered feel.

Coastal motifs are a natural part of the decor. Noah and Jennifer found old oars on the property and fashioned them into handrails for the stairway. Homemade mobiles are everywhere: clam shells on jute twine by the front door, colorful fishing lures downstairs. In keeping with her interest in salvaged goods, Jennifer turned a slab of wood found at a state auction into a dining table with recycled copper pipes as legs.

Outside, Noah replaced the rotten siding with Western red cedar shingles treated with bleaching oil, which weathered to a subtle gray. The front door was painted crimson.

Read the full story of this makeover

A unique set of challenges

Noah later constructed a two-level deck, which meant towing a thousand pounds of lumber up the rocky beach. (Inevitably, the cable broke, the lumber slid into the bay, and Noah had to fish for it with a boat hook.) “We built this deck so Sadie can eventually ride a tricycle around it ― it’s a 1,000-square-foot playpen,” he says. “And it’s nice to have a big space outdoors when you have low ceilings and narrow rooms.”

Life in the cabin comes with a unique set of challenges. When Jennifer was seven months pregnant, a heavy storm forced her to trek the half-mile footpath in snow up to her knees. Most of the time, however, the everyday nature walk is “a great way to decompress,” Noah says. “It’s normal to us now to push our groceries home in a wheelbarrow.”

The biggest obstacle is the water supply. A quarter-mile line fills their cistern from the nearest city source; in the winter, their supply depends on the line’s being thawed. One February, they went without running water for a week and a half.

Still, both agree they wouldn’t trade any of it for a more conventional way of life. “There’s a strong sense of community here because we rely on one another,” Jennifer says. This kinship is obvious during a sunny get-together on the deck, over a feast of king salmon and crab.

Friends arrive by foot or by kayak, toting babies and pans of rhubarb crisp. Neighbors marvel at the photo of the original dilapidated cabin, which takes pride of place in a silver frame by the stairway.

“What we have is the life less ordinary. That’s always been appealing to me,” Jennifer says. “It’s not just a house ― it’s a whole lifestyle.”

Lessons of an Alaskan cabin remodel

According to Noah and Jennifer Jenkins, the key to a major do-it-yourself remodel is to enjoy the small steps. “Break it up into stages,” Jennifer says. Start with the areas where you spend the most time. “The kitchen was one of the first things we did because we love to cook,” Noah says. “The rest of the house was a wreck, but at least we had one space to call our own.”

• Look beyond cosmetic imperfections. Even amid the dingy wood paneling, Jennifer could picture a light and airy cottage. “I immediately saw the tongue-and-groove walls painted white,” she says. With regard to viewing old houses, she recommends looking under the carpeting: “We knew it was a good sign when we saw the original fir floors underneath the red shag.” Pay particular attention to the placement of windows and to any walls that can be removed to open up the space.

• Don’t shy away from tackling unfamiliar tasks. Noah’s construction experience was invaluable in this project, and Jennifer put her own amateur skills to use too. “Learning to set tile is something anyone can do,” she says. The couple bought a book and video to teach themselves how to pour the concrete countertops in the kitchen and bath. Find out if any friends have skills you can use in your remodel ― they may be willing to trade their help for yours.

The kitchen ― rebuilt from the bare studs ― features contemporary touches such as concrete countertops, which the Jenkinses taught themselves how to pour.

• Salvage goods whenever possible. The floors in the kitchen and dining area were from an old house that Noah’s fire department burned down for practice; the interior trim came from a building slated for demolition. “Visit lumberyard clearance sales and ask what they’re getting rid of,” Noah advises. The lumber for the lower deck was acquired at a sale for $300.

• Mentally prepare for downsizing. Life in a tiny house requires a different mind-set. “Ask yourself honestly, can you live with less?” Jennifer says. “It’s about shifting your idea of what makes you successful.”

How to Design an Eco-Friendly Cabin

Steal the Look of This Waterfront Cabin

Before & After: Tahoe Cabin Makeover