A carefully landscaped space in Mill Valley, California shows you how flowers, trees, and vegetables can all grow together beautifully. 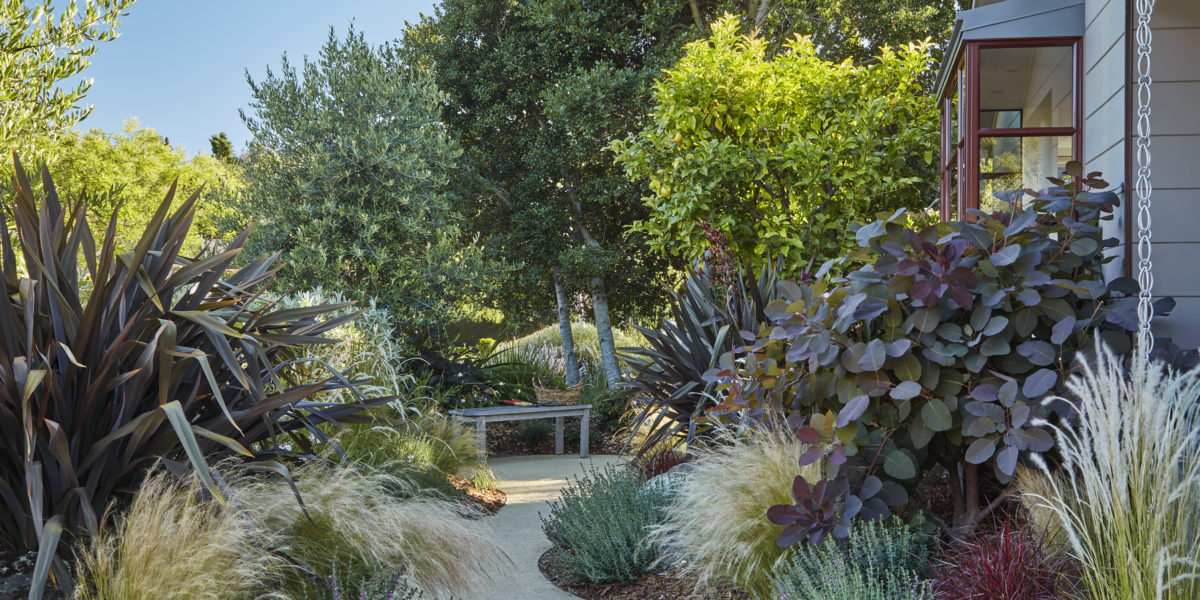 When I looked at the garden Christian Douglas Design created for a couple in Mill Valley, California, it was easy to focus on the purple palette, the undulating garden path, and the shady trellis—but then I found out there were surprises in store. Namely, that this garden is not only well-composed; it also produces a surprising variety of fruits and vegetables. Think kale tucked in among lavender, and citrus hedges that do double duty. There are so many edibles, in fact, that the easiest way for me to tell you about it is to break the garden up into three zones, just like the designer did when he was creating the space.

First, let’s talk about the path that leads to a roundabout. In the center, a Corten steel planter is filled with everbearing strawberries, and around the outside of the area, blueberry bushes grow from May to August. Non-edible kangaroo paw gives a vibrant pop of red next to deep purple salvia.

In the background of this space is a seating area. “That’s our tranquil, shady spot,” says Douglas. “We wanted to do one space that was cool, where you could sit and read a book at any time of day.” You can also pluck Concord and Flame grapes while you read, since they drape the trellis, or you could visit the nearby mission fig tree.

Next, let’s talk about the plants near the kitchen, which are just outside the door. Near a Fuji apple and a persimmon tree, kale, tomatoes, and peppers thrive. “It’s one of our design philosophies to put vegetables next to the house, and we get pushback on that,” Douglas says. Why? “It’s a common theory that vegetables are ugly, but what we’ve observed is that the further you put vegetables away from the home, the less people look after them. Then they get messy, perpetuating the idea that vegetables are unattractive.”  In this case, the clients can see the vegetables from the kitchen window, which means they know exactly when they’re ready to pick.

The third zone is the custom, U-shaped lounge area next to a lemon tree, with a lime and tangelo hedge behind. The hedge hides the fence and gives the feeling that you’re in an outdoor, green room. In front of the citrus trees are the herbs—oregano, marjoram, thyme, and purple basil, with still more strawberries. A water feature is carefully placed for the bees and hummingbirds. “There’s a lot of intoxication here when it comes to scent,” Douglas says. “The basil and the citrus come in when you sit down—it’s so important to think of scent when you’re doing a landscape, not just color.”

Perhaps not surprisingly, Douglas is the founder of The Backyard Farm Company, which teaches clients how to farm at home via in-person and online classes. “We mentor homeowners on how to grow their own food, much like our forefathers and -mothers would have done, but has been lost in our culture,” he says.

Nevertheless, when it comes to this garden, there’s more to talk about than just the food it provides. To make the garden feel bigger, Douglas added the curved pathway (he was inspired by a natural stream with boulders and rocks), then mounded the soil on either side to give a sense of contour.

Meanwhile, one of the clients is a therapist, and patients are invited to explore the garden while they wait for a session. The garden is low-water, while the pathways and the front driveway are permeable. A rain chain leads to an underground swale that disperses the water underground. This way, the garden keeps as much water in the soil as possible.

In all, the garden is a stunning achievement that the homeowners—and the designer—appreciate. “We packed a lot of vegetables into this one,” Douglas says. “We did kind of nail it, I have to say.”

Busy Street? No Problem. How They Hid This Beachfront Seattle Retreat