A Beautifully Renovated A-Frame with Views of Oregon’s Mt. Hood

A six-month renovation transformed the cabin into a cozy family home—and a summer Airbnb. 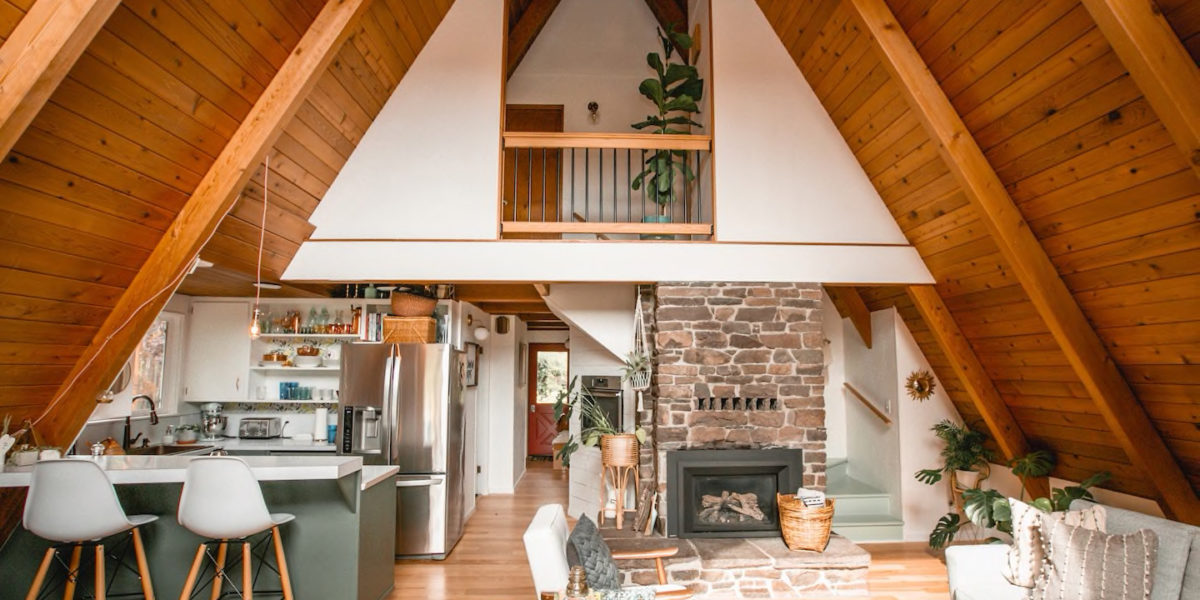 Liz Castellon Nelsen has a clear memory of the day she found her A-frame home. She, her husband, and two young daughters were renting in Oregon’s Hood River area after moving from San Diego, burnt out from city life. Nelsen is from Jalisco, Mexico, but was raised in the Bellingham, Washington area since she was a young girl, and chose to return to the Pacific Northwest to raise her daughters in the types of greener pastures she cherished in her own childhood. “We were driving to the playground when the girls started fussing in the car, so I pulled over into a random gravel road to attend to them, and to our surprise, there was the most peculiar little cabin,” she says. “I had never seen an A-frame in real life and knew nothing about them but was fascinated right away.”

The A-frame’s property looked like an overgrown junkyard, with a murky yellow cabin sitting on it. “I remember getting out of the car and the girls instantly calmed down and happily ran free in the field as I peeked through doors and windows. It was love at first sight and I knew this place had to be ours,” says Nelsen.  It took five months to close on the sale, during which the seller painted the cabin red, creating the name the @redaframe.

Unsurprisingly from the property’s original state, the cabin needed plenty of love once the home was theirs. “The cabin was bare bones when we got the keys, so we had to do a ton of updates,” says Nelsen.

Some of the first items on their to-do list in the two-bedroom, one-bath home were laying new flooring, painting over the brown veneer paneling throughout the house, and replacing the green shag carpet on the stairs. “It was a huge undertaking and a crazy six-month period of home updates that we did ourselves with a two- and four-year-old in tow, all while living in it,” says Nelsen.

But the A-frame had plenty of unique qualities that the Nelsens kept, from gorgeous tongue-and-groove cedar planks to original brass dual cone pinhole sconces.

The great room is one of Nelsen’s favorite spaces in the A-frame, thanks to its tall 22.5-feet ceiling and stone fireplace. Originally, there was a wood burning stove in the space, but since it wasn’t up to code, it was replaced with a gas fireplace.

The original 1965 kitchen got a budget-friendly makeover. To create a refreshed space on a dime, they homed in on the absolute necessities. “We updated the appliances, removed cabinets and doors, and added fresh paint and wallpaper,” says Nelsen.

Nelsen’s husband is a science teacher, while Nelsen works from home in sales and marketing for the outdoor retail industry, and they rent out the A-frame on Airbnb during his summer break when they travel as a family. “The last two summers we have rented out our home for 10 straight weeks while we traveled,” says Nelsen. “The first summer we road-tripped the West Coast from Seattle to Tahoe, and this past summer we visited family in multiple states. We even made our way up to Whistler, Canada, and then all the way down to Mexico where we traveled for eight weeks and enrolled our girls in preschool to really immerse them in the language and culture.”

Finishing the original six-month makeover hasn’t stopped Nelsen from continuing to update the cabin. “The most recent remodeling has involved replacing the two large bay windows in the playroom and the gigantic picture window in the main room,” she says. “What a difference that’s made—no more sweaty, foggy windows!”

The playroom packs another favorite feature of hers in the house—the hanging chair. “It’s a big hit with everyone, especially the kids,” says Nelsen.

Design-wise, Nelsen has found the lack of true walls inside of the A-frame to be one of the biggest challenges. “I have so much art and picture frames and no flat walls to display them on,” she says. “I also miss having shelves, or any type of storage.”

“The most recent decorating project was the girls’ bedroom,” says Nelsen. She added matching rattan bed frames from Crate and Barrel, and painted an accent wall in the bedroom for them.

There’s only one bathroom in the entire A-frame, and it needed plenty of love when the family got the keys. “The bathroom shower and tub area got gutted,” says Nelsen. “We added fresh paint and fixtures, and my husband learned how to tile thanks to YouTube tutorials.”

Nelsen’s next phase of the makeover? The A-frame’s exterior and surrounding landscaping. “The end result has been totally worth all the hard work for sure,” says Nelsen. “Somehow there is still so much to do with the exterior and landscaping, but we just have to remind ourselves it’s a marathon and not a race.”

This Moody Big Bear Cabin Is a Dreamy Urban Escape

Stunner of ’69: A 50-Year-Old Tahoe A-Frame Gets Rejuvenated