Inside a Gorgeous, Light-Filled Cottage Tucked Into an Echo Park Backyard

With skylights and its own courtyard, this one-bedroom cottage is actually an Accessory Dwelling Unit, or ADU. When the husband-and-wife partners Bo Sundius and Hisako Ichiki of Bunch Design showed friends their backyard ADU (aka an Accessory Dwelling Unit, a secondary housing unit on a single-family residential lot), the visiting couple loved it—and told them they were ironically moving from their Echo Park rental because their landlord was doing a house renovation, including looking to add an ADU to the backyard. The friends introduced Bo and Hisako to their landlord, knowing he’d love their designs and ADU approach, and the duo was hired.

While Bunch offers pre-designed ADUs that follow California’s 2017 law around building the units, the homeowner had a small backyard that he wanted a custom design for in hopes of maintaining as much space as possible for gardening. Views of the garden and yard were top of mind for the ADU’s custom design. A major source of inspiration came from the designer couple’s recent trip to the Japanese countryside. They saw Japanese storage houses called kura that were two stories high, plastered white, made with inflammable materials, and located behind traditional Japanese homes. Since fires are a common risk, a kura is where a family’s treasured possessions are kept safe.

There are two different exterior treatments on the custom ADU. The top level takes inspiration from the Craftsman-style main house’s lap siding with a larger, cleaner version, while the bottom level embraces plaster from the original kura design inspiration. The Bunch team designed clean eaves to contrast with the blue sky, and sharp plaster lap edges to cast shadows so the entire ADU feels light. The Bunch team designed the ADU with a two-story dynamic shape that shifts midway, so that the lower level moves three feet away from the rear property line, providing a nice overhang on one side, as well as space for a stunning skylight on the other. The ADU is only 650 square feet, but the manipulation of space with the dynamic levels and natural light makes it feel larger. A 12-foot, multi-stacking door opens the living room to the rear courtyard, giving the living room an outdoor extension. Along with the 12 feet of stacking window doors, the skylight and large windows on the other side open up the rooms with natural light, giving the living room an expansive feel. The kitchen is a more compressed space, but light from the skylight pours in from the kitchen’s doorway, creating a sense of a larger space even in this cozy room. The Bunch team used this technique from Frank Lyold Wright, with a compressed entrance before the space opens up for a big visual reveal. 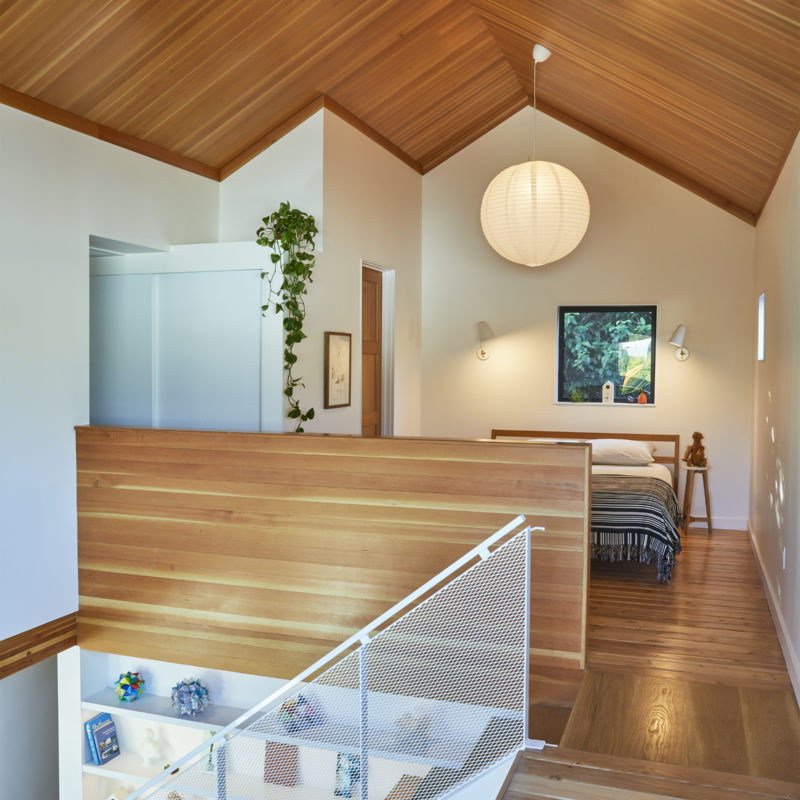 The second level contains the bedroom and bathroom. The stair guardrail was custom-designed to look like a net, using expanded metal, while the interior side of the stairs is a bookcase. The aim was to keep the staircase looking light, while also keeping it useful. The homeowner originally intended to rent out the ADU once it was completed, but so far it’s been a useful guest house filled with friends and family visiting Los Angeles. ADUs can be a property gamechanger for a variety of reasons, and the Bunch design founders have had both professional and personal experiences that illuminate why. “We built the first ADU for ourselves to house my father when he needed care and the alternatives of him living elsewhere were truly nightmarish,” said Sundius. “The ADU provided a home for my parents when we all needed it most, and it was so nice to have him close.”

Sundius recommends adding ADUs both for the increased rent they can bring in during tough times, and the amazing community that it can bring to your door. “For anyone nervous about having folks they don’t know living on their property, I can say that they quickly become neighbors and especially here in L.A., it is quite nice to have a bit of community around,” says Sundius. You’ll Want to Move into This Modern, Foliage-Filled Yurt

This Beautiful Before and After Craftsman Transformation Will Leave You Speechless