Sophie Pennes, of Urban Farms LA, explains how sun is more important than space and how it’s perfectly possible to pull off an edible garden in a city environment. 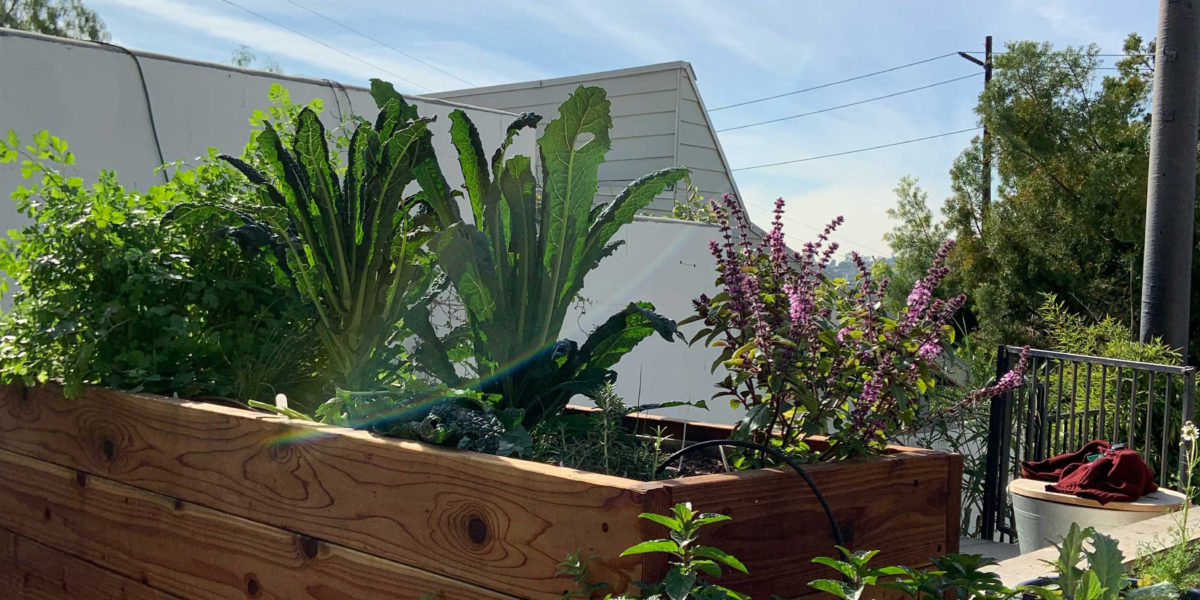 The seeds of Sophie Pennes’ wildly successful career as a Western garden professional were sown in, of all places, New York City. Pennes arrived in the metropolis to study fashion, but quickly found herself unhappy, unfulfilled, and questioning the importance of the work she was doing.

Discouraged, she moved back home to regroup only to find that her parents were going through a minor reckoning of their own. They’d been getting a CSA box, but had lately started wondering if they couldn’t just grow their own produce.

The whole Pennes family hit the garden, and Sophie found herself there for as much as seven hours some days. “It made me happy again,” she remembers. “I felt like I was living healthier. I enjoyed every part of it. My immediate thought was, ‘why don’t I help other people do this?’ Because it brought me a lot of joy.”

For the last five years, Pennes has been bringing gardening to the greater Los Angeles area through her one-woman establishment, Urban Farms LA. We spoke to Pennes about the challenges and joys of raised-bed gardening in a city, and specifically about growing herbs, that most reliable of edible-gardening crops.

Does it seem realistic to you that herbs are a good place to start, when gardening?

Yeah, I think herbs are a good place to start…why not?

The nice thing about a lot of herbs is that you don’t have to know specifically when to harvest them. They’ll just keep growing. So that’s something that I think makes it a bit easier for people. For example cilantro, if it goes to flower and you don’t do anything, the seeds will just fall back into the soil and you’ll get new cilantro.

Can you let them go too long?

Sometimes the flavor will change slightly. Chives and scallions can go for a really long time. When scallions go to flower they get a very woody stalk in the middle and you don’t want to eat it but you can use it, definitely, for soup stock.

Cilantro won’t do well in the summer. It’s just too hot. Mint and oregano and lemon balm do this thing where they put out a ton of leafy greens, and they live for a really long time, and then they start to look really raggedy, and if you cut them all the way back the plant will regrow.

I’ve had that experience with mint. I wasn’t sure what to do with it, but it didn’t seem to matter. It seems to thrive no matter what I do.

Mint is really aggressive. I would never put mint in a raised bed. You’ll end up with 15-foot-long mint roots that you’ll have to pull out of your bed.

How much space do you need for a raised bed? Is it realistic that some city dwellers might have space for this?

I usually say it’s more about sun than about space. Because sometimes people have a ton of space, but they actually get no sun, just because of how the house is positioned, or the trees. I think there’s opportunity for almost everyone to grow something.

What kinds of pests are urban gardeners likely to encounter that they might not necessarily if they were out in the country or more suburban?

It’s really interesting because the ecosystems in cities are so different. We’re lacking a lot of natural predators in cities because we’re killing plants that provide for biodiversity. Some really common pests are grasshoppers. Those can eat a whole plant overnight. In the summer you get a lot of tomato hornworms. In the winter you don’t get those so much. In the winter you get aphids. And then sometimes you get crows that are super interested in your plants. And sometimes you get smaller birds, like sparrows or finches that like eating seeds you plant.

And sometimes you have pests, and it’s not really that big of a deal. It’s sort of like the taxes that you pay, you know? Because they do other good things for us. But other times they can be really destructive. Like hornworms are really destructive.

What can you do about them that isn’t sort of a napalm approach?

The hornworms? I pick them off with my hands. They turn into really pretty giant moths. They’re called hawk moths. If you don’t know, you would think they were humming birds. They’re so pretty. I try to either put all my hornworms on one tomato plant, and sort of sacrifice that one to nature itself. Or I try to feed them to chickens, or just put them in the compost pile and wish them well.

And I assume you don’t want to use chemical pesticides if you don’t have to?

No, I don’t use chemicals.

Have you found it possible to avoid them entirely?

Not entirely. I use a neem oil spray that I make myself. Sometimes I use diatomaceous earth, or roly polies. If you get really bad pill bugs, that tends to work. I use Sluggo once in a while. But I’m not using any pesticides that I need to put on gloves and goggles for.

It’s good to know its possible to raise your stuff in the city without that.

Oh, it’s super possible.  And I would say the more diversity of life that you have, not just plants but animals, the better your chances are going to be of having a successful garden.  And in terms of that, I also do a lot of companion planting. So I put in kale, or cauliflower, I’ll plant around them onions or garlic. And then I do a lot of flowers in my gardens. You know, hummingbirds are huge pollinators, but they also are pretty carnivorous. They like to eat a lot of small bugs.

If someone is raising herbs, especially if they’re a beginner, is it realistic to expect that this will be easier, or cheaper than going to the grocery store? Is that the point?

Is it realistic to expect that maybe a beginner is going to have produce from the garden that is at least as good as grocery store produce?

Oh, for sure. And that’s when you get hooked. That’s when you get addicted. Because you buy this tiny little tomato plant, and all of the sudden, all summer you’re giving your friends tomatoes and you’re kind like, “whoa!” That’s the moment.

What’s your favorite thing to grow?

I really like growing squash. There are just so many different kinds. I like eating them but they also it can be really rewarding because sometimes squash give off so many, like pounds and pounds and pounds of zucchini and that’s a plant that you can just give away.

I love my pruners. I mean, those are like my right hand. I use them all the time. I have a few different kinds. I use Felcos. And I have a Japanese brand called Niwaki that I like, and also these Japanese gloves that are also by Niwaki.

What is the best advice that you could give the first time gardener?

Is it fair to expect some trial and error?