The Novogratz family moves West, creating a fairy-tale Hollywood abode that’s storybook on the outside, and rooted in high-low furniture and design within 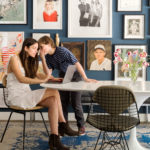 In 2015, design moguls Cortney and Robert Novogratz did the unthinkable: The Southerners turned die-hard New Yorkers, who raised seven children in the city, moved to Los Angeles. “We were there almost 25 years. We never left after 9/11. We never left after Hurricane Sandy,” says Cortney in a soft Georgia drawl (Robert grew up mainly in Virginia). “But we were doing some work out here, and we were like—let’s just go for it. It was important for us to mix it up for our kids, for them to see people don’t just live like they do in Manhattan. They needed to see how people can live.”

So the family zeroed in on the Hollywood Hills, for its amazing views and a central location that still felt urban. The pair purchased an estate worthy of their one-of-a-kind lifestyle: a 7,700-square-foot French Normandy–style castle, originally built by a silent-movie star in 1926 and set between Marlon Brando’s former Spanish revival residence and Frank Lloyd Wright’s Mayan revival Storer House. They enlisted contractor Warren Bregman of Imbuia Construction, a frequent collaborator, to help them transform the rambling, segmented estate into a functional, modern family house with flow. A top priority: decreasing the number of bedrooms from seven to four.

“We really tried to open up the space and make it not such a big house—so that we’re all together,” says Cortney. Since the kids were sharing rooms, the family was able to expand in ways that encourage gathering: adding a playroom adjoining the youngest boys’ bedroom, a subterranean movie theater, a music room, and a master bath.

This sociable design philosophy manifests in an open-plan layout throughout the house. On the main floor, the couple broke through dividing walls to create a spacious, connected kitchen, dining, and living room, and upstairs and down they removed 15 doors in their quest to free up the rabbit-warren layout.

“Even when all nine of us are here ... I can kind of see where everyone is,” says Cortney of her sight lines from the kitchen, where Swarovski pendants hang above a Carrara marble–topped island. “We’re mixing classy and fancy and casual,” she says of the tone throughout.

The couple (with their family) starred in Bravo’s 2010 series 9 by Design and HGTV’s subsequent Home by Novogratz. Early on, much of the interest (aside from the juggling act that is nurturing and keeping alive seven humans—including two sets of twins)  stemmed from the pair’s uncanny ability to seamlessly blend high and low design and myriad eras and styles—bold, quirky pairings that shouldn’t work but do—in boutique hotels and private residences before it became the de facto approach.

She speaks passionately of their desire to bring good design to the masses at affordable prices via their many collaborations with the likes of CB2, Old Navy, and The Shade Store, as well as through their own product line.

The move to the West Coast has only fueled this desire to mix styles and price points, sparking a renewed appreciation for midcentury furniture and all things bespoke, thanks in part to L.A.’s more cost-effective network of manufacturers. “Creatively speaking, it was the fire spark we needed,” she says. It’s brought something else unexpected too: “Here, when I’m outside I can still hear the city; I can hear an ambulance—things I’m used to,” she says. “But I can be picking from my citrus trees or sitting in the pool—I have both. And that has become so peaceful for me, in a way that I never realized I needed.” 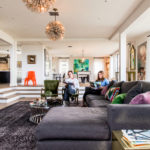 “The bookshelves in the living room are always changing—we use them to display the kids’ art and tchotchkes from the flea market that we keep until we get sick of them and sell them, or gift them to clients,” says Cortney. A pair of 1960s light fixtures is a focal point of the room, framed by an L-shaped custom couch. 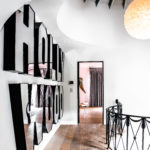 “There wasn’t a lot that was original to the house that we were able to save, but we kept the stairs and the front doors,” says Cortney. “We’re not purists, but anything cool, we saved.” A mirrored lettered sculpture spelling out Hollywood hangs on the landing above the entryway. 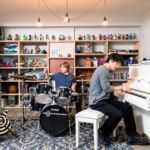 “Our son Breaker [on piano] is the musician—he is the one who needed his own kind of moment,” Cortney says. A soundproof door keeps the noise low. 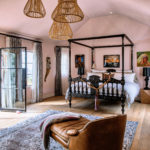 An antique Indonesian four-poster bed along with a trio of artworks above and flanking the bed attest to the pair’s high-low collecting ethos—Rene Ricard’s Boat hangs between two flea-market finds. Three Orbita pendants by Tomoko Mizu cluster on the ceiling. Paint in Calamine, $110/gal.; us.farrow-ball.com. 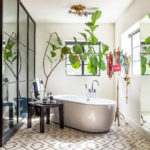 The master bath is a spacious retreat for Robert and Cortney, whose portable, DIY vanity—the base is the pair’s own Iconic End Table design—pulls right up to the Toto bathtub. In the corner, an antique stand doubles as a necklace holder and sculptural object. Commune for Exquisite Surfaces tile from the Navajo Collection covers the floor ($28/sq. ft.; xsurfaces.com). 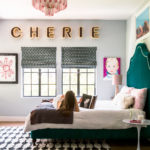 Fraternal 19-year-old twin sisters Bellamy and Tallulah directed the design of their bedroom. “They had to really compromise on how they were going to share the space,” says Cortney. A “Cherie” sign from a Paris flea market and a commissioned portrait of Tallulah by Linda Mason adorn one wall. The vintage chandelier from Dispela Antiques strikes a glamorous, feminine note, contrasting with the Novogratz Retro Stockings Black Shag Rug. Rug, from $24; amazon.com. 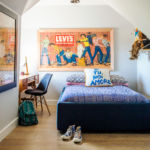 Twin 13-year-old brothers Five and Holleder and 9-year-old Major share a bedroom, where a vintage Levi’s sign from the Long Beach Flea is installed above Five’s custom bed by The Frayed Knot. 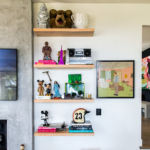 Robert and Cortney share their strategies for making the most of these joyful spaces.

How to Design a Stunning Vacation Home

How to Design a Family-Friendly Renovation