Losing Your Lawn? Plant a Meadow. 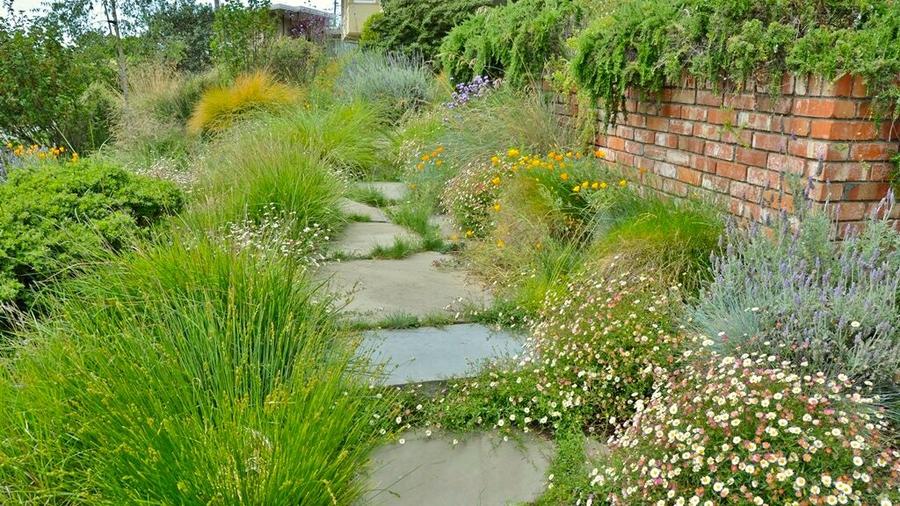 You can take out your grass and still have green in the yard.

1. They use less water than lawns

Once established, this tailored but textured meadow of Native Bentgrass began thriving on twice-a-month waterings. “It has been really drought tolerant for us,” says Hurd, and it recovers easily from foot traffic. Plus, its slightly disheveled  effect is more interesting to look at than lawn. “No crew cuts allowed here,” says Hurd. 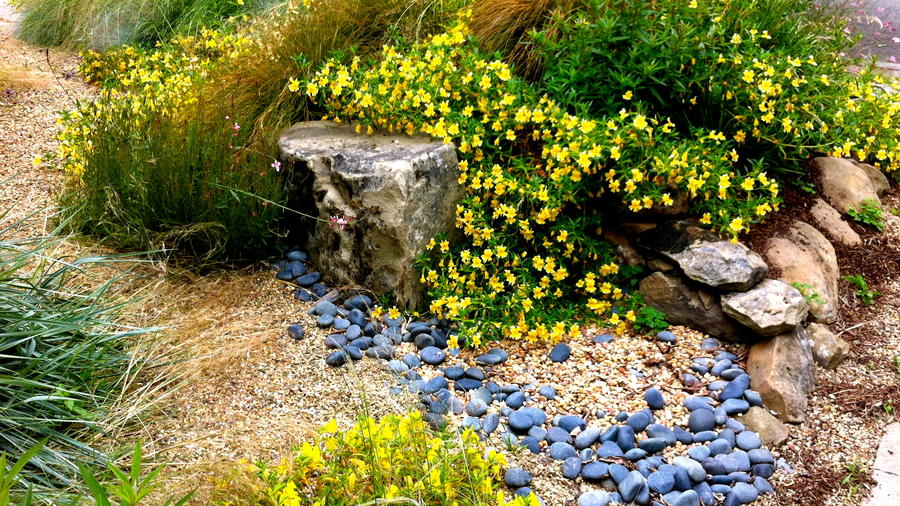 A flat-topped boulder, which looks as though it could host a waterfall during rains, edges a stream-like tumble of river rocks in a corner of this East Bay garden. Behind, monkey flower (Mimulus), which thrives in sun on little water, shows off its golden yellow blooms alongside orange-tinged Carex testacea in the mound. 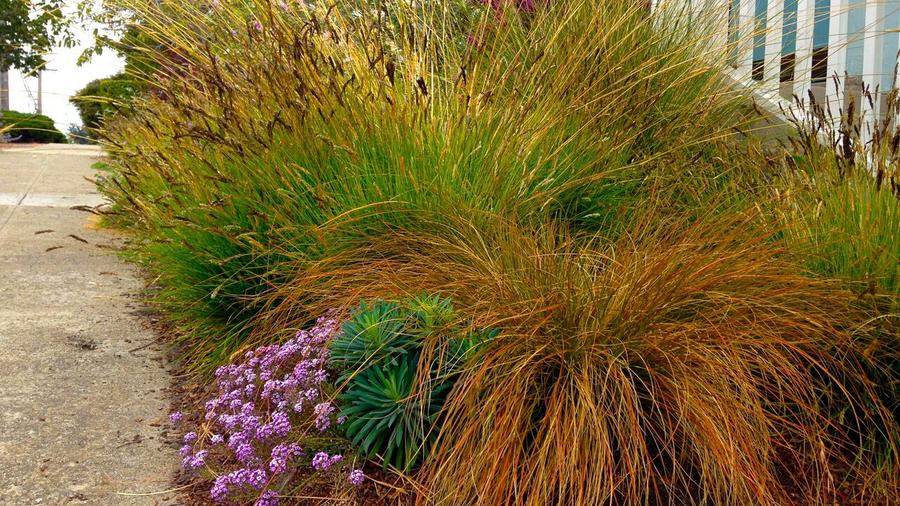 3. They can fit anywhere

This grassy blend adds a touch of the wild between a city sidewalk and the front fence on an El Cerrito home. Carex testacea fans out in front (“it holds its color in winter,” says Hurd), with Moor grass (Sesleria) around it, and bloomers such as Euphorbia mixed in. 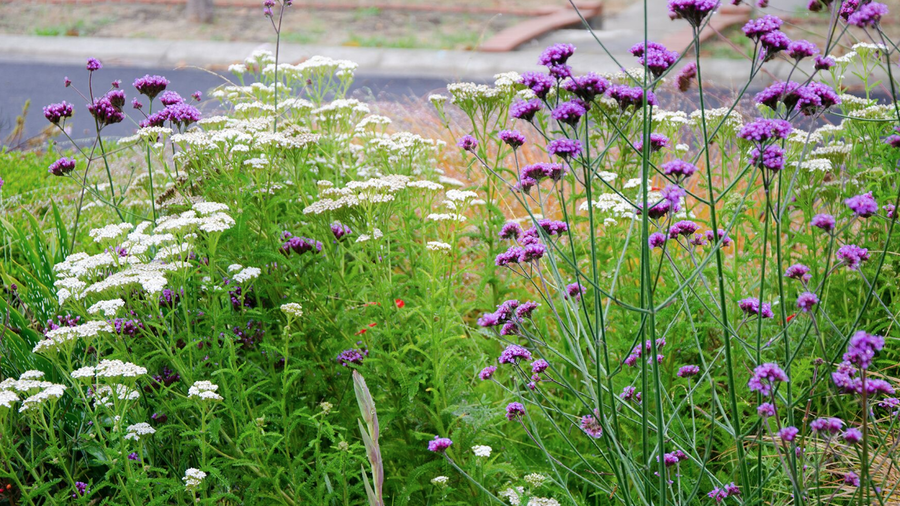 Hurd’s goal for the meadows she designs is to balance habitat with drought tolerance, and to increase diversity. She does this by mixing in unthirsty perennials whose blooms attract butterflies, bees, and songbirds, and whose foliage shelters beneficial insects. Purple- flowered Verbena bonariensis, above, is an example. Others include agastache, white-flowered bishop’s weed (Aegopodium podagraria) and Gaura lindheimeri, and yarrow (Achillea millefolium). “Increase biodiversity by planting grasses and flowering plants closer together so that they’ll mingle,” says Hurd. 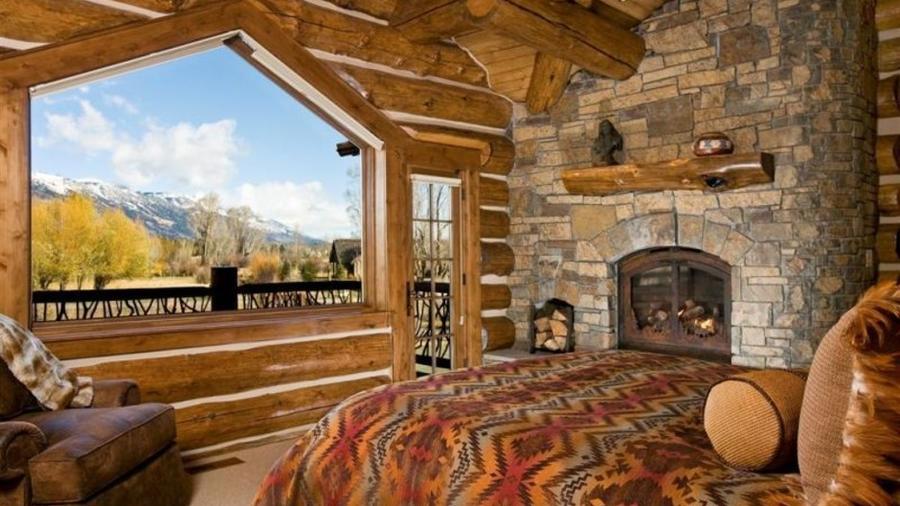 For a textured green carpet, you can choose a mix of deep-rooted fescues that you won’t mow. Or you can start with ornamental grasses and mix succulents that send up candles of bloom, like aloes. Or go for a subtle blend of grasses with a few perennials sprinkled in, as pictured here behind a stone wall. “Stonework and grasses go beautifully together,” says Hurd, who created this one. “The effect is natural and stylish.” 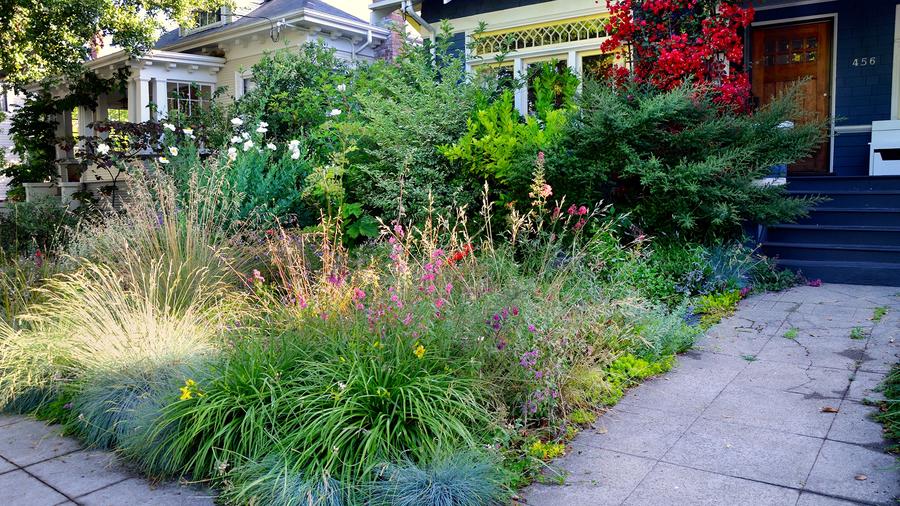 Flowers reign in this front yard meadow, where they add bright splashes of color among the grasses. Blue fescue edges yellow-flowered day lilies in the front corner, with pink-flowered Clarkia behind it, and tall, white-flowered matilija poppies in back. 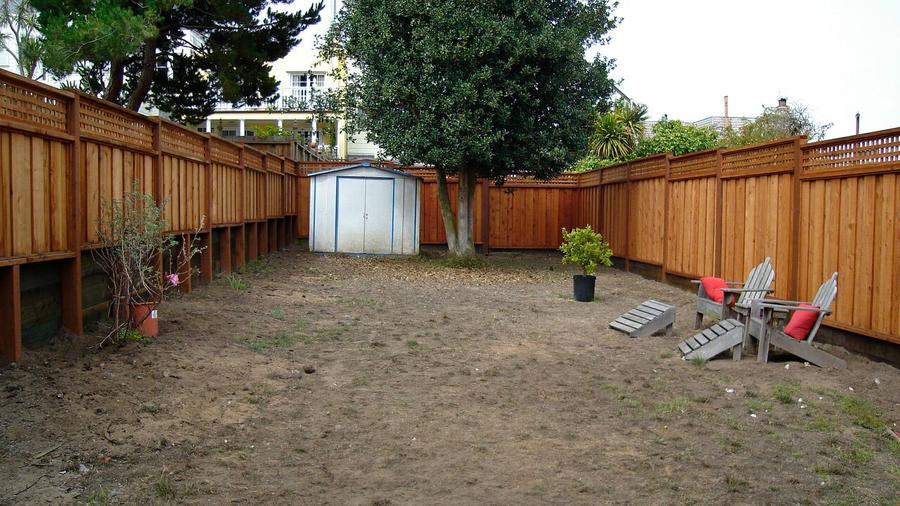 Before Hurd started renovating this San Francisco back yard, she prepped the soil by topping it with a sheet mulch of compost and other amendments, then planted through it. (On some of her jobs, she pulls up the sod, then mounds it to make hills and swales that channel rain water). 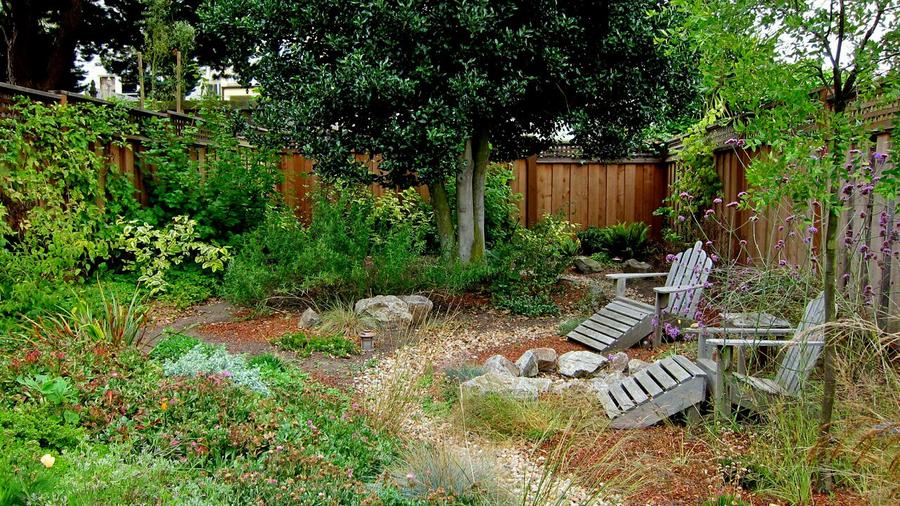 8. They create a vacation vibe

The same San Francisco garden, after the renovation, feels as woodsy and meadow-like as a Point Reyes trail. “The garden is essentially on a sand dune, so we went with a beach theme,” says Hurd, “with drought tolerant, mostly coastal and sand dune natives.” A pair of beachy chairs and a winding path–accented at the curves with a few boulders–complete the look. Most of Hurd’s meadows take about six months to fill in, and once established, get watered “once or twice a month,” either by drip irrigation to increase deep rooting, or by recycled water.