Taste your way through Anderson Valley 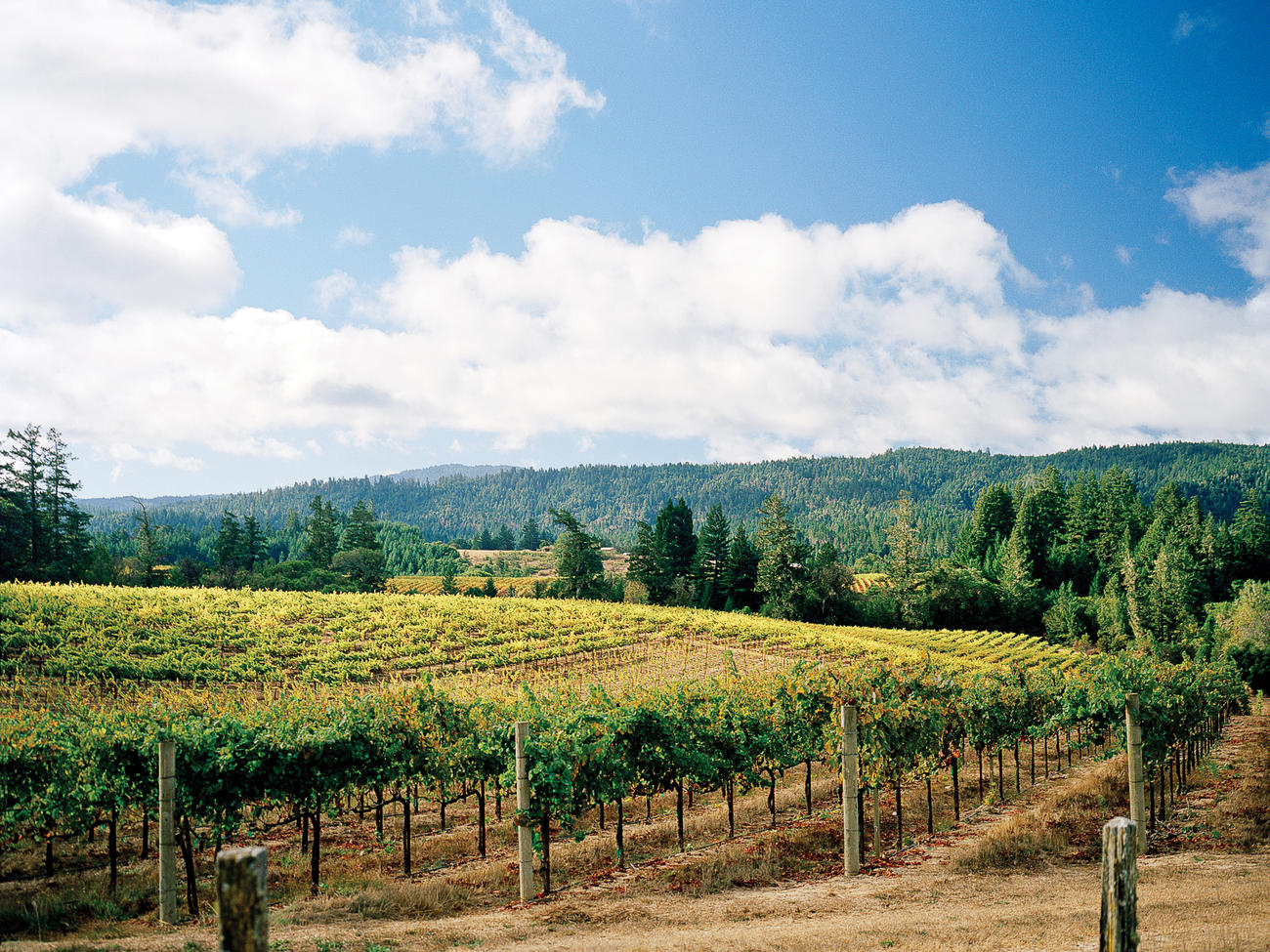 Emily Nathan
The vineyards at Lazy Creek are some of the few that weren't torn out during a 1970s phylloxera scare. Result: The winery's coveted whites are among the only ones made from old-vine grapes.
Written by Amy Wolf, August 29, 2007
Share this story

Driving down the winding, tree-canopied dirt road that leads to Lazy Creek Vineyards, you’d think we’ve taken the turnoff to some secret state park. Alders, oaks, madrones, and redwoods all crowd alongside and over the road, which bumps over three wooden bridges before emerging onto hilly vineyard vistas.

The golden light of Indian summer filters through the trees and illuminates the dust kicked up by our car. It’s a scene so pretty and peaceful that we’re tempted to stop the car and get out for a walk ― or a nap. But then we see 8-year-old Grey Chandler, whose parents, Josh and Mary Beth Chandler, own and run Lazy Creek, and our energy picks up.

“What’s that baby’s name again?” Grey asks. We laugh, amused that this little boy would remember our 1-year-old son, Toby, from our visit several months prior. Then before we know it, Grey is leading Lilli, our almost-3-year-old daughter, down the gravel path. “Come see my tractor,” he says enthusiastically, and they’re off and running.

Taking advantage of the unsolicited child care, my husband and I duck in to the tasting room, which is more like a cozy garage, for a sip of “Gewürz juice” that Josh pours from the barrel. It’s bone-dry and delicious. Then we follow Josh out to the chicken coop, where he hoists our daughter, who has finished her tractor inspection, up on his shoulders and instructs her to open a drawer. She does, and out pops a chicken, like a jack-in-the-box. “What’s under that chicken?” he asks. Eyes wide, Lilli feels under the bird, then incredulously holds up an egg. “Warm!” she says.

We have found perfection, I think: wine for Mom and Dad, and Old McDonald’s Farm for the kids.

A WINE COUNTRY UNLIKE ANY OTHER

Most people, even otherwise well-traveled Northern Californians, would be hard-pressed to tell you where the Anderson Valley is. For the record, it’s about 120 miles north of San Francisco, and about 40 miles southeast of Mendocino. But some of the wines coming out of the area have, in the last 10 to 15 years, become household names: Navarro Vineyards, Handley Cellars, Husch Vineyards, Roederer Estate. Cooled by the fog that rolls in from the ocean, the valley is ideal for Pinot Noir, Chardonnay, and sparklers made out of them, as well as the increasingly appreciated cool-weather whites: Gewürztraminer, Riesling, and Pinot Gris.

The excellent wine we consistently find here is not the only thing that keeps my husband and me coming back to this valley. An even more compelling draw is what we can’t find here: namely, Versailles-style villas, fancy resorts, traffic, standard tasting fees, lines. From State 128, which snakes its way circuitously from Cloverdale out to the Mendocino coast like a zipper slicing the gently rolling hills in half, all you see are miles and miles of trees draped in fall color this month. They’re interrupted only by tiny towns such as Boonville and a couple of other crossroads so small that they don’t even register as towns.

There’s only one road, one hotel, one excellent restaurant (and a couple of more casual eateries), a growing number of wineries, a state park with about 8 miles of hiking trails, and not much else to do besides admire the wine, the food, and the scenery. As a result, the valley feels manageable, approachable, and somehow a lot more authentic than other wine countries in California.

That authenticity stems in part from the back-to-the-land culture that thrives in this valley, where everyone we meet seems to be raising their own cows, sheep, and chickens. Fresh eggs, in fact, become the unifying theme of our three-day trip. We find them under the chickens at Lazy Creek, sold at the Boont Berry Farm in Boonville, and served at each place we eat: the Boonville General Store ― where the food is so good that we return not only for every breakfast but also every lunch ― and the Boonville Hotel, where Johnny Schmitt, as chef-proprietor, serves simple, honest, outstanding food.

The Schmitt family is one of the main reasons the Anderson Valley has retained its integrity in an age when every other wine region seems to morph into the same predictable monoculture.

In addition to running the Boonville Hotel, Schmitt has committed himself to reinvigorating the inevitable development of Boonville. He’s just opened a complex of artist studios across the street from his hotel to add to what he considers the already thriving alternative cultural scene in the valley. He hopes these “off-street studios” will encourage drivers to stop and linger.

“What I don’t want is for people to come here for a monoculture ― for just winery and B&B hopping,” Schmitt says. “I want them to come for the apples, the art community, the river, the natural beauty. Napa is like a honeymoon vacation; people don’t bring their kids. Here I hope people bring their kids, take them to the river and the woods, let them run around.”

Which is exactly what we do. After visiting the chickens at Lazy Creek, we hit Standish Wine Company, where the tasting room is an old apple dryer set high up in the trees like a fort. Here a tiny kitten named Bluebell leaps and skids around the kids while my husband and I pair aged goat cheese with Pinot Noir. At Hendy Woods State Park, we walk along sorrel-lined trails, look up at towering trees, and visit the hermit hut, where a recluse really did live for 20 years as recently as the 1980s. Back outside the park, in Philo, we take off our shoes and wade in the river that serves as the locals’ swim hole in summer. Then we sit on the banks, watching the occasional car rumble across the Philo Greenwood Bridge above.

A FARM YOU COULD FALL IN LOVE WITH

From the river, we walk across the bridge to the Philo Apple Farm, which is, in itself, reason enough to visit the valley. With its orchards and gardens, its rustic farmstand where chutneys and jams are sold on the honor system, and its handful of modern-design cottages hiding in the trees, the Apple Farm is the kind of place that makes country living look appealing enough to get even the most jaded city dweller dreaming of moving out to the country. Which, in a sense, is what owners Don and Sally Schmitt did.

Back in the late 1970s, the Schmitts founded the French Laundry in Yountville, where Sally was chef, and where Don was the sommelier (as well as the mayor of the town). As Yountville transformed into a world-famous capital of food, wine, and ritz, the Schmitts began to yearn for a simpler, more rural lifestyle, which is how they ended up in the Anderson Valley, a place that was, even more so back then, virtually unknown. With the help of their daughter Karen and her husband, Tim Bates (who are now co-owners), they rehabilitated these orchards and started the cooking school, where they still teach all the classes themselves.

But you don’t need to know any of this to appreciate the Apple Farm’s appeal. Case in point: our kids. They seem just as content as we are to wander among the perfectly manicured orchards, stopping to watch Tim bottle cider, and to admire Karen’s potting shed, which is so meticulously tidy it looks like something out of a Beatrix Potter picture book. We round a bend and come upon a set of cages where bunnies clamber and flop over one another, to the sheer delight of our kids.

As late afternoon light washes over the orchards and gardens, and the sun warms our river-chilled bodies, a chicken crosses our path. Toby sprint-crawls in its general direction while Lilli pipes up: “Need chickens for eggs!”

My husband and I look at each other and grin, proud that our daughter has internalized the concept of knowing the source of her food. And then we drive away, in search of a good glass of wine.

Taste your way through Anderson Valley