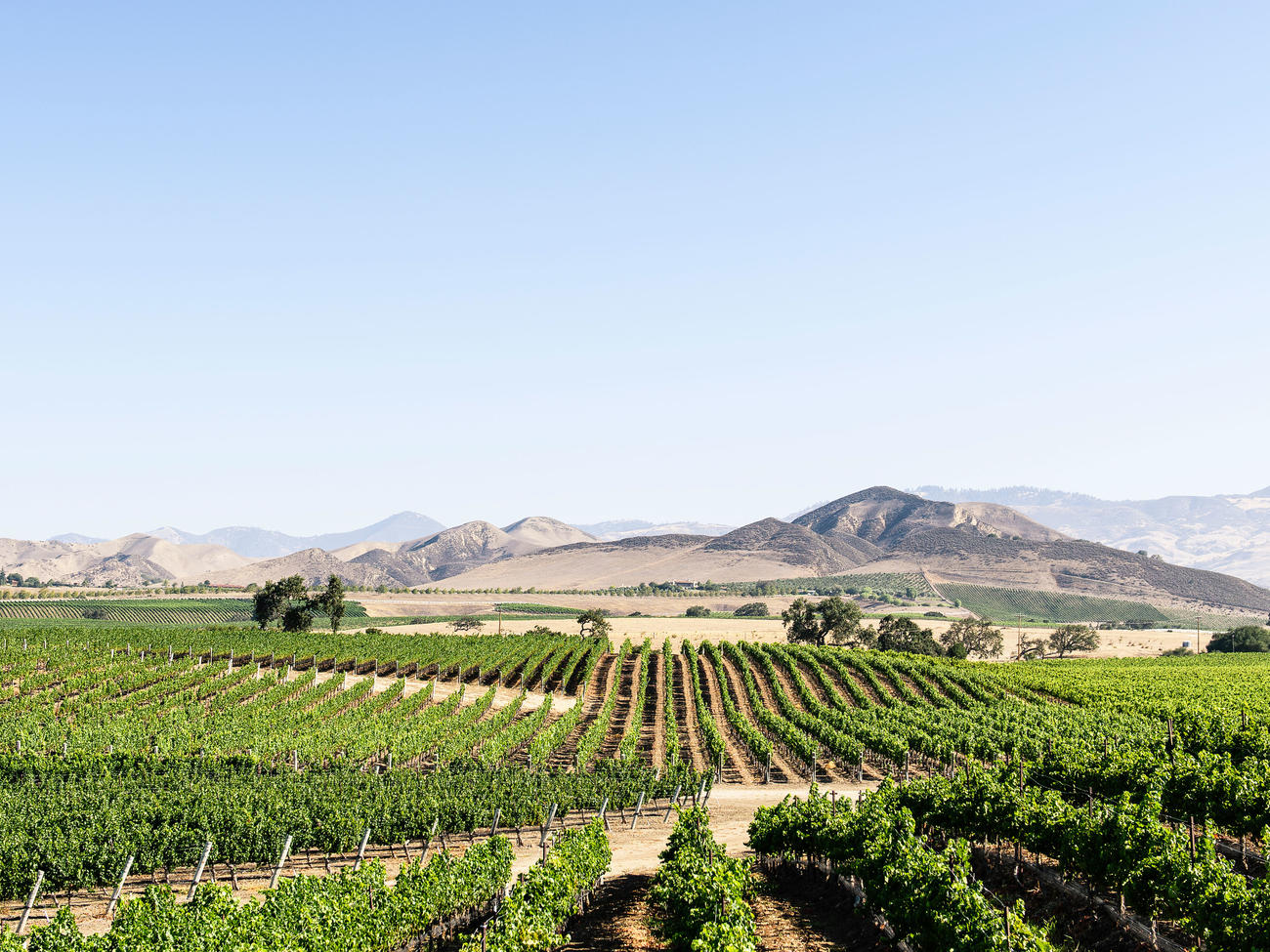 Before there were winemakers, there were cowboys. For a century, Santa Barbara County was ranch country. Even now, a fiberglass horse stands in front of Jedlicka’s in Los Olivos, where if you head inside, you can buy Justin Ropers, Stetson Alamos, and beautifully crafted saddles. This Western-ness makes Santa Barbara wine country special. What is terroir, after all, but a sense of place?

Still, the county is changing. The number of acres planted in grapevines has more than doubled since 1995, and the number of wineries has risen sharply too. Given the region’s relative proximity to Greater Los Angeles, it’s not surprising that some of these new ventures have been launched by winemakers with show-business credentials.

As for the wines, they’re superb and varied, thanks to the county’s topography, which ranges from hot interior valleys in the east (great for Bordeaux varieties) to more westerly, ocean-cooled zones around Lompoc (terrific for Pinot Noir). More than 50 varieties thrive here, in five separate appellations.

S.Y. Kitchen. Luca Crestanelli’s modern rustic Italian dishes include 10 specials on some nights. He sources ingredients from local farms as well as more distant purveyors, taking advantage of the Santa Ynez Valley’s bounty and the fact that he can get an exceptional burrata from Italy in 24 hours. His gnocchi is lighter than air; his lamb ragù, astonishing. $$$; 1110 Faraday St.; sykitchen.com.

ForFriends Inn. The inn’s rooms and cottages vary from Victorian to ranch, and each is named for a local winery or vineyard—for example, Demetria and Refugio Ranch. A three-course breakfast prepared by co-owner Debbie Campbell starts the day, while her husband, Jim, serves the wine at happy-hour gatherings. From $250; forfriendsinn.com.

Bacon & Brine. Local foods in a tiny house: How much more of-the-moment can you get? In a minuscule cottage with outside seating, Bacon & Brine serves sandwiches and salads made with local produce and pork from heritage pigs pasture-raised on nearby farms. It’s a team effort: Chef Crystal DeLongpré handles the butchering, smoking, and curing, while wife and “fermentation goddess” Courtney Rae takes care of the sauerkraut and kimchi, among other brined items. $$; 453 Atterdag Rd.; baconandbrine.com.

The Landsby. Cool? Solvang? Aebleskiver and windmills notwithstanding, America’s Little Denmark is becoming pretty darn sophisticated. Exhibit A: The Landsby, formerly the cutesy Petersen Village Inn, now a contemporary Scandinavian boutique hotel. The clean and spare guest rooms feature white-oak floors and handcrafted furnishings. The hotel’s public spaces include a courtyard with fire­pits, plus an inviting lobby bar for cocktails and local wines. From $229; thelandsby.com.

Rusack Vineyards. In Ballard Canyon, Rusack produces a Zin linked to some of the county’s oldest vines. Its 2013 Ballard Canyon Estate Zinfandel uses grapes grown from cuttings transplanted from an 1884 vineyard on Santa Cruz Island. Is it worth the wait? You bet. $15 tasting; 1819 Ballard Canyon Rd.; rusack.com. We recommend: Along with the Zin, Rusack 2013 Syrah (Santa Barbara County; $29).

Industrial Eats. It looks more like it belongs in downtown Los Angeles than on the Central Coast: a pair of wood-burning ovens in a cavernous space decorated with found objects—a saxophone, surfboard, and old Toledo scale. The butcher paper menu lists “Pizza” and “Not Pizza,” while housemade charcuterie fills the display case. Settle in at one of the communal tables and keep your ears open for vintner gossip: Industrial Eats is a favorite of local wine professionals. $$; 181B Industrial Way; industrialeats.com.

Alma Rosa Winery & Vineyards. Next door to Industrial Eats is the new tasting venue of Richard Sanford and his wife, Thekla, among the most respected of Santa Barbara County’s early winemakers. Though longtime fans may miss the humble vineyard cottage from Sanford’s early days, the Buellton spot has its own appeal. Built from recycled Douglas fir, it’s light filled and welcoming, and the wines are as good as they get. $12 tasting; 181C Industrial; almarosawinery.com. We recommend: Alma Rosa 2013 Barrel Select Pinot Noir (Sta. Rita Hills; $60).