Ready to unleash your inner big kahuna? Catch a wave at surf camp 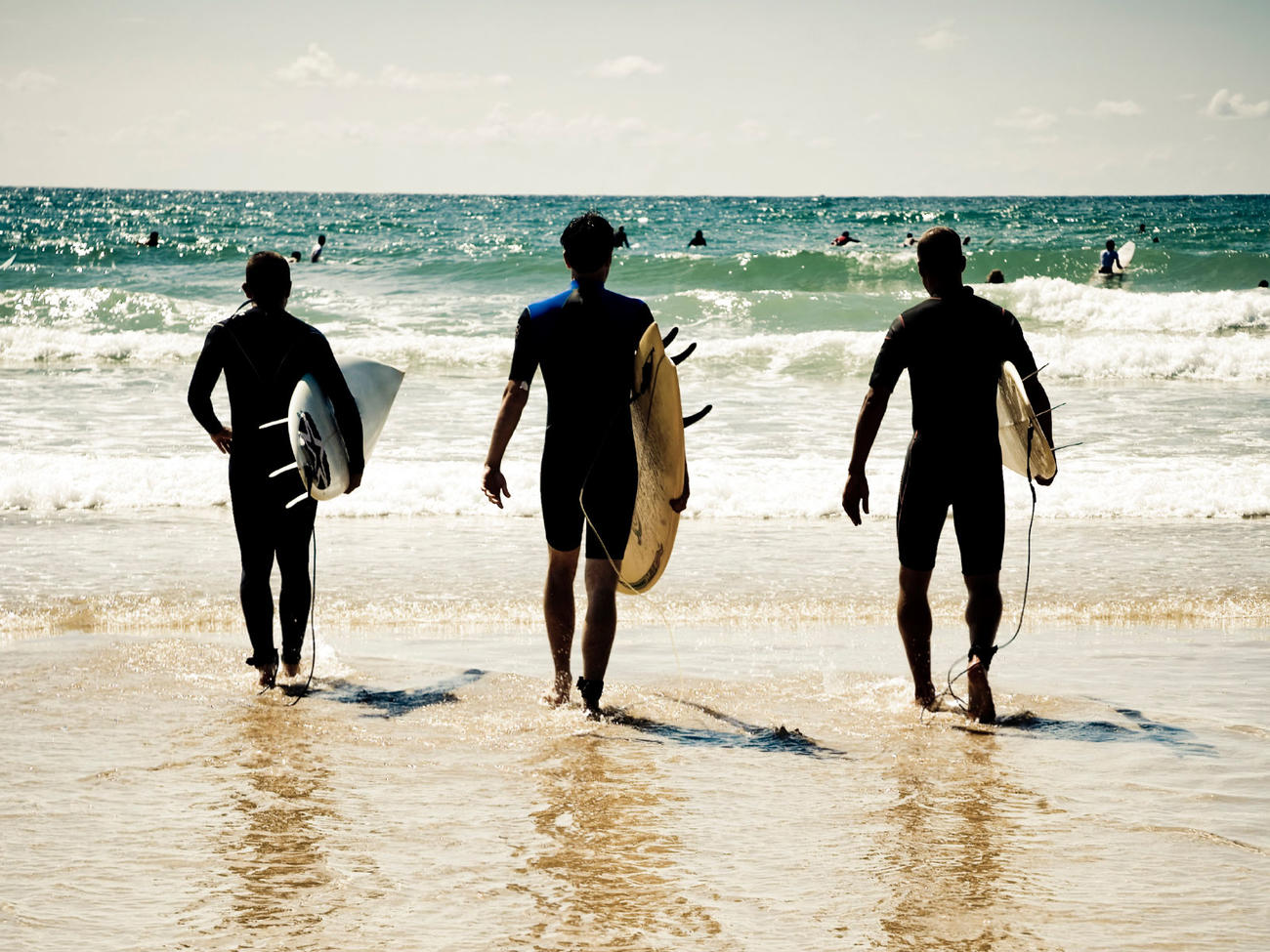 Not long ago surfing was a sport for the young and hardheaded, because surfing instruction proceeded like this: Excited, you walked into a surf shop and informed the dude behind the counter that you were a beginner. He rented you the worst surfboard in the place and gestured vaguely in the direction of the ocean. You returned to the shop at the end of the day, noodle-armed and defeated, the board even worse for wear having bounced several times off your face.

When it comes to learning to surf, says Ed Guzman, “there are three critical elements. Good wave conditions, good equipment, and good instruction.”

Guzman should know. As head of Club Ed International Surf School and Camps in Santa Cruz, California, he’s part of a revolution that’s making surfing accessible even to those of us who aren’t buffed, tattooed, and 19. Right now, Guzman is beaming because, after a 10-minute tutorial on the beach―pop up quickly, crouch low, feet wide, weight over the center of the board―one of his beginners stands, albeit shakily, on her very first wave, her face an open book of surprise and elation.

“Another life ruined,” he says.

“It’s easy if you take it step by step”

Any surfer, beginner or expert, will tell you that riding a wave is one of life’s finest pleasures. As Guzman, a surfer since 1969, informs us on our first day of camp, “It’s going to blow your mind.”

First, though, your mind has to remove a roadblock―the fear that you won’t be able to do this. “Even if you’re over 40, if you’re reasonably fit,” says Guzman, “you can surf.” Club Ed’s clients have ranged from age 4 to age 70.

The weeklong camps work simply: You eat, sleep, and breathe surfing. But there’s a paradox involved. Once mastered, surfing is freewheeling improvisation, a dance between wave and rider. But learning to ride a wave requires a methodical bricklayer’s approach.

“You have to learn how to stand up,” instructor David Schulkin tells us. “But you also have to learn where to sit to catch the best waves, when to paddle to catch the wave, how to paddle out through waves. There’s a lot to learn, but it’s really easy if you take it step by step.”

On our first morning we line up our surfboards in the sand.Unlike most surfboards, which are made of foam coated in fiberglass(i.e., very hard), the surfboards Club Ed employs are made of soft foam. They are also long (9 to 10 feet), thick, and wide, making them easier to paddle and nearly as stable as the Queen Mary(element number one, the right equipment).

We stand in our wet suits watching the small waves. They well up, then crumble gently, making it easier for beginners to stand and slide down their fronts (element number two, the right conditions). Some campers are itching to get in the water, butGuzman stops us in the sand (element number three, the right instructor).

First we move through a series of stretches. Then we lie stomach down on our boards, shifting and squeaking until we are where we need to be: head, hips, and legs (pressed together) aligned, a neoprene arrow running straight down the middle of the board.

Properly centered, we practice popping to our feet.

“Hands at the base of your ribs,” croons Guzman. “Push up with your arms and slide your feet under you into a wide stance.Standing has to be a quick movement. Fast is easy. Slow is difficult.”

We run through this numerous times until Guzman is happy. Then we receive an indoctrination in wave formation (waves form when wind blows across the water), wave nomenclature (the highest part of the wave, and the best place to catch one, is the peak), and wave etiquette. (The wave belongs to the first surfer who catches it. Dropping in on someone who’s already riding a wave is both dangerous and taboo.)

By the time we paddle out 15 minutes later, the cool brace of the Pacific Ocean seeping into our suits, we are a font of oceanographic knowledge and good manners.

Three hours later, over lunch, Grace shakes her head. “My arms are a little sore, but I’m really excited,” she says. “It’s been along time since I’ve done anything this fun.”

Most of Guzman’s students are raw beginners―but there is a small percentage who are not.

Lance Maki is 55, a burly, gregarious doctor so passionate about surfing that he is listed as “Dr. Maki Surfer Dude” on surgery rotations. But no amount of passion can overcome geography. Prior to moving to Stockton, California, six months ago, Lance spent 30years in the Midwest, putting a serious dent in the surfing skills gained during his youth.

Maki and I are cut from the same cloth. I have surfed for 25years, but for the last decade, family and job have cut into my water time, and my surfing skills have receded with my hairline.

Luckily for us, Guzman and Schulkin prove as adept with rusty surfers as they are with beginners. I learn how to pump my surfboard to keep my speed up on small waves. I learn how to do a thrilling little trick called a reentry―swoop up from the bottom of the wave to meet the crest as it comes pitching over, producing a brief moment of gravity-free ecstasy.

A quality surfing camp offers various niceties, and Club Ed has them all. It’s based in a eucalyptus-shaded campground at Manresa State Beach. The food is first-rate. A masseuse comes to camp midweek. Mike DeGregorio, a local surfer and videographer, shows up and films us.

Of course, taking a single lesson is also an option. But a weeklong camp, by definition, offers things you won’t find in a day―the opportunity to surf different spots, and the chance to enjoy the camaraderie of your fellow campers. Each of us at ClubEd were privy to the taste of salt on our lips, the press of warm sun on our face. And when we woke every morning, the sound of the waves came to us, like a whisper, calling.