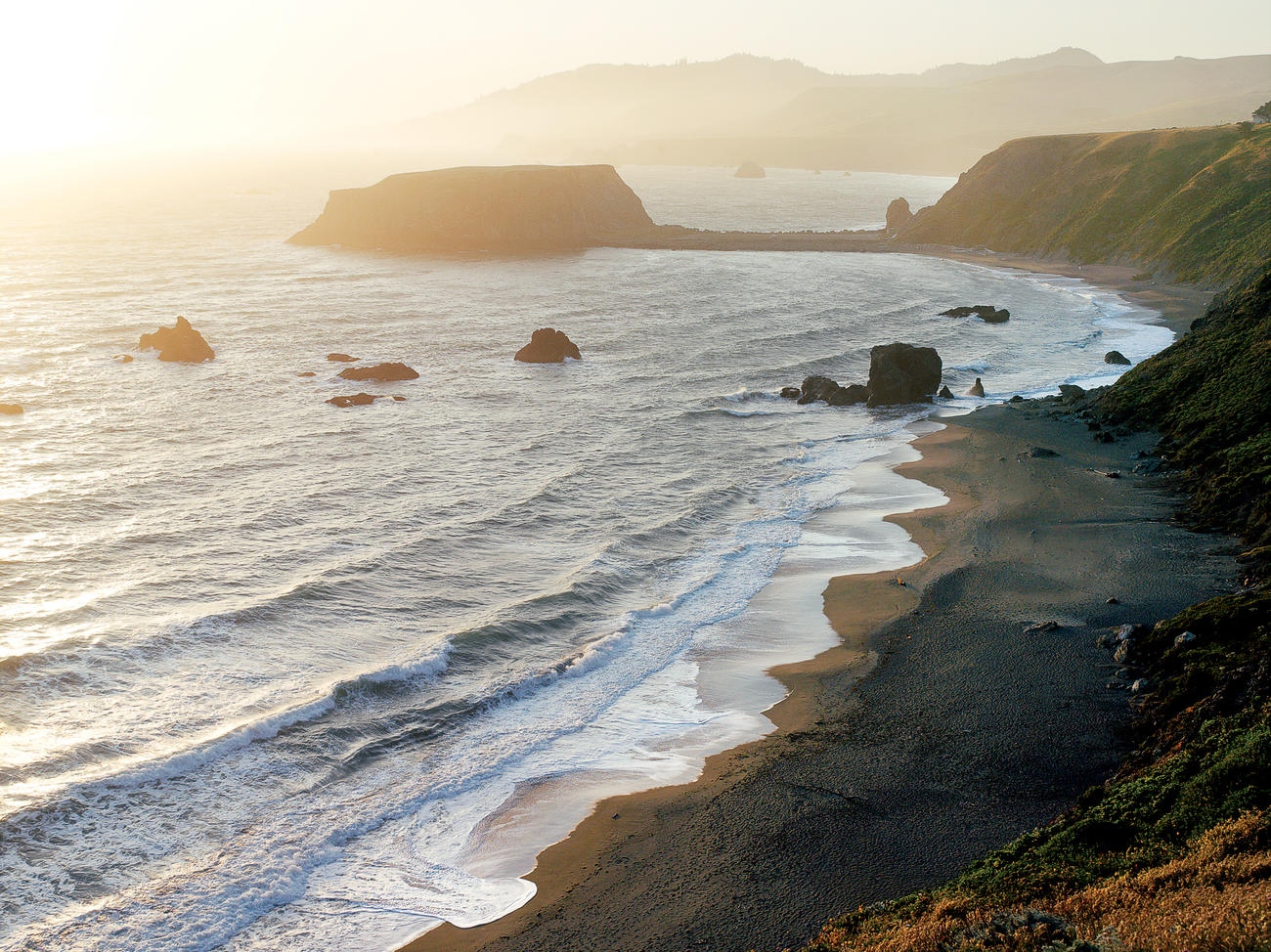 The rugged stretch of land that runs along Sonoma County’s coast inspires grand passions. From the pocket coves of Bodega Bay and windswept bluffs of Sea Ranch to inland pine-covered peaks and ocean-carved sea stacks, the area is marked by layers of fog, gulls, sweetgrass, and wildness.

It’s a place where you can tidepool for hours in precious solitude or ride thrilling, frigid waves; a place where delicious wine and cheese are made carefully, lovingly, by hand. The people who live here are all, in some fundamental way, dreamers, and as they carve out a living, they ― winemakers, farmers, foragers, surfers, innkeepers, chefs ― are wildly enthusiastic about the place that they call home.

Though the coast lies only 30 miles west of Santa Rosa, Sonoma County’s largest city, it’s hard to cross the Coast Range to reach the crazy helix of State 1 here. Roads twist in on themselves and rise only to drop. I have to wind around ridge after ridge, descend into pocket valleys, then make my way out of them again, as if I’m a bug trying to cross some massive granite rose in bloom.

This is what has protected the area’s distinctiveness, as it fosters what could be called zealotry. Outside the tiny town of Annapolis, up in the hills, vintners and brothers Nick and Andy Peay launch into the difficulties of growing grapes on a former sheep ranch and apple farm as soon as I step out of the car. Their wood house, more than 100 years old, sits atop a knoll overlooking lines of grapevines, and its isolated location and the brothers’ flurry of words makes me wonder when they last had visitors. They describe fog belts, soils, and “cool-climate viticulture” ― overwhelming me with thousands of words before I can stammer out a sentence.

The Peays searched for years for the perfect location and deemed it this spot 10 years ago, on land others had called too foggy for grapes. “Some might say, ‘You fools, what are you doing?’ But there’s a greater reward for the greater risk,” says Nick.

The brothers’ energy explains how they’ve been able to handle the challenges. Winemaker Vanessa Wong, also Nick’s wife, uses the long season to craft nuanced Chardonnays, Pinot Noirs, Cabernet Sauvignons, and even Syrahs that have, like many Sonoma Coast labels, developed a cult following. One sip of their minerally, superbly elegant wine and I agree about the rewards. In that instant, I vow to start buying lottery tickets so that with my jackpot I can drink this wine every night, because that’s now my definition of true luxury.

I have, you could say, caught the Sonoma Coast fervor.

Why does everything taste so good here? For cheesemaker Liam Callahan of Bellwether Farms, down south in the Petaluma Gap, the answer’s pretty simple: happy sheep. “The climate is very, very mild,” he explains as he stirs his San Andreas cheese by hand. “We’re so close to the ocean. The sheep are not stressed. The more comfortable they are, the better the milk.”

Callahan’s parents bought a vacation home here years ago, then purchased a few sheep to keep the grass trim. One thing led to another, and the family ― none of them experienced farmers, the children at the time avowed city kids ― found themselves raising sheep and making cheese. The Callahans have learned a lot since then, but because they started with such sweet, mild milk, their cheese developed devoted fans right from the start ― including their very first customer (and still one to this day), the famed Berkeley restaurant Chez Panisse.

Heading north from the sheep farm, I pass the dramatic mouth of the Russian River, where freshwater pours into the Pacific and harbor seals return year after year to raise their young.

My car switchbacks up the steep, golden hills; the ocean wraps itself around the globe far to the west. It is entirely apparent why this oversize landscape inspires oversize devotion from those who come here.

Back at my rental cottage at Mar Vista, the innkeeper, Renata Dorn, is tending the garden. She has her own dreamer’s story: A city hotel executive, she searched for the perfect spot to start her own retreat. And here it is, a dozen cheery yellow cottages surrounding a field with chickens, pygmy goats, rabbits, and a garden ― with a view of the sea.

Dorn urges my friend Marisa and me to pick some baby greens for a dinner salad, which will complement the Bellwether cheese and local Dungeness crab we have brought. I comment about everything tasting so great, and Dorn’s explanation is simple. “It’s because it’s all made with reverence,” she says.

Reverence strikes me as the perfect word to sum up the attitude evoked by this place. Who isn’t humbled and overwhelmed in the face of beauty so much bigger than one individual? Marisa and I eat our dinner as the evening brightens then fades to blue. The air is charged with energy from the sea. And we are sated, content, and transformed in the new light.