Monterey Bay has gone from toxic soup to pristine waters supporting sea otters, whales, and a thriving kelp forest. What we’re learning here might just save our oceans 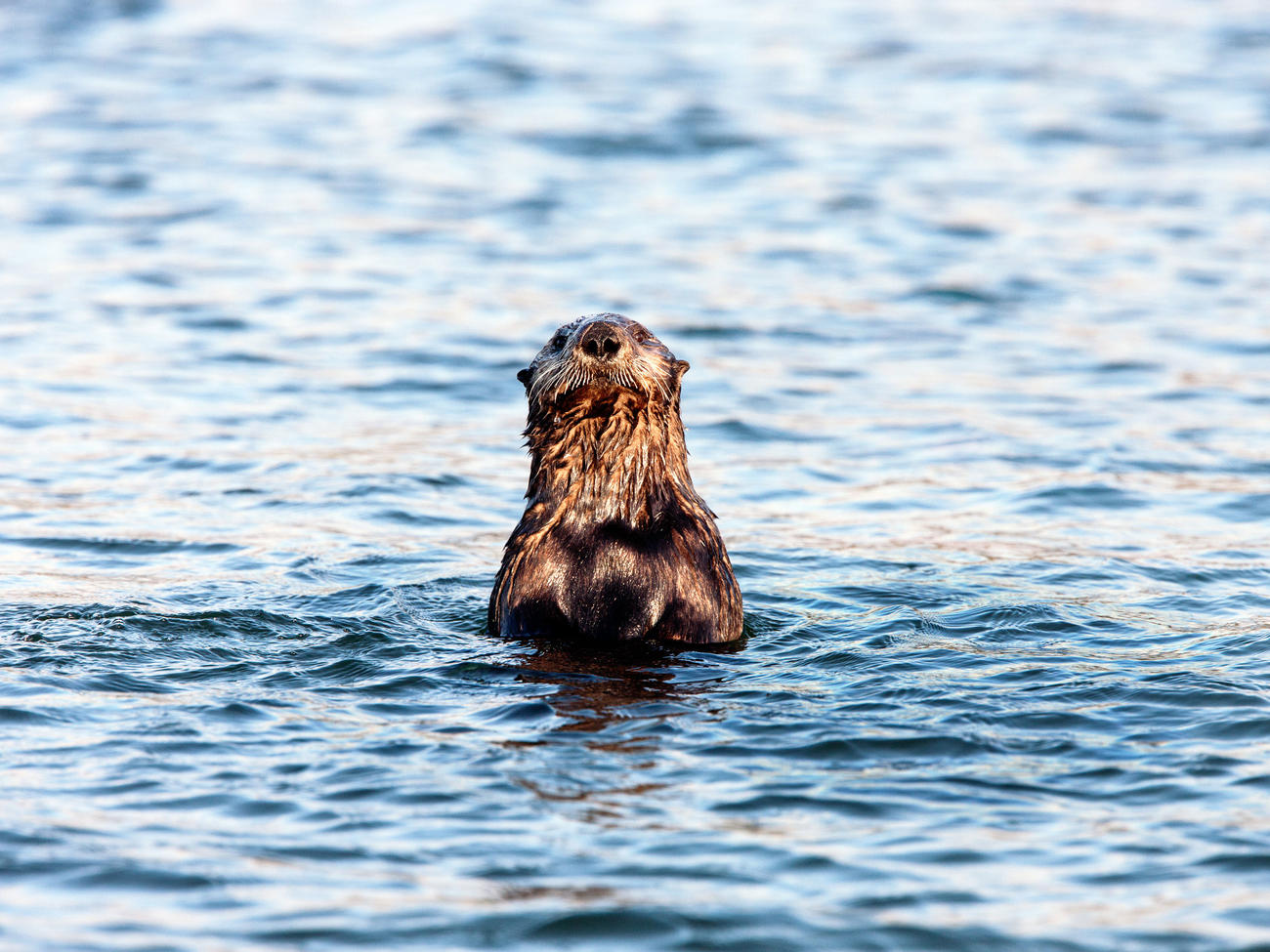 Corey Arnold
Monterey Bay is now a hospitable home to local marine wildlife, such as this adorable otter
Written by Peter Fish June 17, 2013
Share this story

Stephen Palumbi surfs and plays in a rock band, but mainly he’s a marine biologist. So when he takes a visitor on the trail that winds from Hopkins Marine Station along the rocky shoreline of Monterey Bay, he mostly talks about the bay. Here’s where otters gather, and farther out, that’s where humpback whales tend to feed. As gulls squawk, Palumbi, the marine station’s director, points to a tawny crescent beach crowded with seals and newborn pups. “Seals, seabirds, otters, whales—the bay is better off than at any point in the last 150 years,” he says.

A few generations ago this would have been counted a big surprise. Then, Monterey Bay was one of the most polluted places on the Pacific Coast—“an industrial hellhole,” he says. Now it’s a kind of paradise. And one with a remarkable lesson.

The dire state of the world’s oceans can make even the most environmentally minded shut down.

If it’s any consolation, even people who have built careers in conservation can feel overwhelmed. “I’m as subject to bad news as the next person,” says Julie Packard, executive director of the Monterey Bay Aquarium for the last 30 years. “I listen to the NPR reports on coral reefs and climate change—it’s hard. But the only thing that is going to lead to positive change is that we all get involved. Because really, what’s the alternative?”

The one place on the planet where the oceans’ problems might be solved is the place Packard and Palumbi call home: the 120-mile indentation on the central California coast called Monterey Bay. It’s a special spot, the bay. Famously beautiful, its 455 square miles nurture one of the most diverse ecosystems in the world, including dozens of species of marine mammals, still more of seabirds, hundreds of species of fish, and one of the largest kelp forests in the world. The bay’s most dramatic feature is not visible from shore: Monterey Bay Submarine Canyon, a chasm that in depth and complexity is the undersea equivalent of the Grand Canyon.

Put it another way: If you were a marine scientist who wanted to study stuff that nobody had ever seen—and which might help you better understand the world’s oceans—Monterey Bay would be the place to do it.

Today, the area hosts the largest concentration of marine science research and policy institutions in the world, nearly three dozen. With them comes one of the planet’s largest gatherings of world-class marine scientists, some 200 to 300, estimates Palumbi. This assemblage of marine knowledge is akin to Silicon Valley’s cluster of high-tech expertise, says Meg Caldwell, executive director of the Monterey-based Center for Ocean Solutions. “You have all these experts just a 20-minute drive away.” It all comes back, she adds, to the bay’s wealth of marine environments from deep sea to beaches to kelp forest. “Really, the biodiversity is phenomenal. It’s like having Africa’s Serengeti in our backyard.”

Corey Arnold
Cormorants up close from a rental kayak

How did it get better?

We’ve now stopped at a bend in the coastal trail, and Stephen Palumbi tells a story. It was 1947, and a college student named Merilyn Derby had just arrived at Hopkins to study marine biology. The day was sunny, the bay was inviting, and Derby grabbed a swimsuit and jumped in the water. It was cold, recounts Palumbi, but Merilyn expected that. What she didn’t expect came next. “Fish heads,” Palumbi says. “And fish tails. And guts. She jumped out of the water.”

That was what Monterey Bay was like for decades: a befouled nightmare. But it wasn’t the bay he saw when he moved here from Harvard in 2002. “It was so beautiful,” he says. “I found myself asking, ‘How did such a big place get ruined? Then how did it get better?’ ”

Palumbi began interviewing people like Derby for what became The Death & Life of Monterey Bay, his book (coauthored with Carolyn Sotka) published in 2012. He learned just how bad Monterey Bay had been. Start with 19th-century fur hunters, who decimated the bay’s sea otter population. Without the otters, sea urchins (the otters’ favorite food) multiplied wildly, devouring the bay’s kelp forests—which led to the demise of the fish and other life that depended on kelp to survive.

Next went the bay’s gray and humpback whales, hunted to near extinction, then the abalone. “A collapse of wildlife,” says Palumbi. Just one fish remained in abundance: sardines. When entrepreneurs realized the shiny silver fish could be caught and processed and sold to grocery stores, canneries sprang up along the bay shore. These supplied jobs and inspired one of local boy John Steinbeck’s most famous books, Cannery Row. But as Derby discovered, their industrial waste turned the bay into toxic soup: “They were dumping 100,000 pounds of fish guts and tails and heads into the bay every day,” says Palumbi.

The bay’s decline was rapid and seemingly irrevocable. Yet, improbably, it did recover. In part, it healed itself. Once the sardines had been fished out, the canneries closed. Without the canneries, the water became cleaner. That allowed sea urchins and abalone to return; these, in turn, lured the few remaining sea otters up from Big Sur to feed on their favorite foods in Monterey Bay. With fewer sea urchins, the kelp forest sprang back.

Corey Arnold
A glimpse of the region’s thriving kelp forest

The need for human help

Yet that wasn’t the entire story. Palumbi found that at crucial moments the bay has received human help. One heroine stands out: Julia Platt, a marine scientist (the first American woman to earn a doctorate in marine biology) who became mayor of Pacific Grove, California, in 1931. Her training made her understand just how badly the bay had declined. She fought the canneries, and when she lost that battle, turned her energy to establishing the first community-sponsored marine preserve in the country, just offshore from Pacific Grove. It was in this protected zone that, decades later, abalone first reappeared. “Instead of giving up,” says Palumbi, “she said, ‘What else can I do to leave the ocean better than it was before?’ ”

Today, generations after Platt turned Pacific Grove City Council meetings into marine biology seminars to get her preserve established, research institutions dot the Monterey Bay coastline the way wineries dot Napa Valley. Each facility tends to focus on specific kinds of scientific questions. Palumbi’s Hopkins Marine Station studies how marine organisms react to their environment. Long Marine Laboratory zeroes in on marine mammals. Some of the most cutting-edge research occurs at MBARI (Monterey Bay Aquarium Research Institute), command center for a fleet of robotic vehicles that delve as far as 2 miles down into Monterey Canyon, “past cliffs and to the deep sea floor, the abyssal plain that goes all the way across the Pacific,” says MBARI researcher Jim Barry. The vehicles, he explains, give access to part of the planet that would otherwise be as hard to explore as the surface of Mars.

Much of the current research is tied to the crises the Pacific faces. Because Monterey has been studied so thoroughly for so long, it’s an ideal place to determine how quickly climate change is affecting the ocean, by comparing what’s living here now with what lived here, say, 50 years ago. (The answer: more warm-water species now.)

Some research may help us manage or mitigate the effects of climate change on the oceans. Working in American Samoa, Palumbi discovered coral reefs that “can survive the hottest Pacific water we know about and still do quite well,” he says, “whereas other corals die at those temperatures.” The heat-resistant reefs are the ones that must be protected from development at all costs, he argues, because they’ll provide homes for fish even if the other reefs around them are dying.

Bay researchers have also changed the way we eat. Monterey Bay Aquarium’s Seafood Watch is among the most effective consumer-awareness programs ever devised: Since its founding in 1999, its 40 million pocket guides and 1 million downloaded smartphone apps have advised North American consumers which fish to buy and which to avoid. And the aquarium successfully pushed for California’s recent ban on the shark fin trade: “A huge victory,” says Julie Packard. “Now we’re starting to look at options on trash—legislation that sets targets for reducing marine plastic waste. I think we can have a huge impact on that.”

The biggest impact is in the heart

Never discount the power of beauty. Monterey Bay was saved in large part because Julia Platt and her voters judged it beautiful enough to merit saving. Today the bay’s scientists and conservationists hope they can spark similar passion to save all the planet’s oceans.

Says Packard, “Growing up, I was lucky enough to spend a lot of time in rural California. So I had a real connection to the outdoors. Now I realize that when you’re talking about nature, you’re talking about the ocean—because most of nature is the ocean.” The trick, she continues, is to make people feel how vital the oceans are to their lives. “At first we thought the aquarium was going to be all about conveying facts to people, and they would understand them. Now we realize what’s important is the emotional impact—what you feel when you see our huge sunfish or the cathedral light of our kelp forest exhibit. The biggest impact is in the heart, not the head.”

Palumbi is heading back on the trail toward Hopkins Marine Station. It’s later in the afternoon now. The bay sparkles. He talks about the ways Monterey Bay and the research done here can affect the rest of the world. “I tend to be an optimistic person,” he says. The changes the oceans are experiencing are grave, alterations not experienced in the last 50 million years. But, Palumbi says, we still have a chance, if we can halt the things we do that are damaging the atmosphere and so damaging the oceans.

“I go all over the world and give talks about the problems the ocean faces,” he says. “And then I come back here. There are so many places where you can say, ‘Oh, this got bad, and then that got bad.’ But Monterey Bay is one of those rare and special places where the tape ran backward. Where you can see things get better. It helps to have a good example.”

How to see the same creatures and ocean features the Monterey Bay scientists study—on land or out on the water.

Monterey Bay National Marine Sanctuary Exploration Center. This center lets you explore a two-story version of the Monterey Submarine Canyon; the deck has a fine view of Santa Cruz Wharf and the bay. montereybay.noaa.gov

Elkhorn Slough National Estuarine Research Reserve. One of the largest tidal marshes in California, a haven for egrets, herons, and sea lions, all easily seen from reserve trails or a kayak. elkhornslough.org

Kayak tours. Nothing gets you closer to the bay’s marine life than a kayak. Outfitters include Monterey Bay Kayaks (montereybaykayaks.com), Kayak Connection (kayakconnection.com), and Adventures by the Sea (adventuresbythesea.com).

Long Marine Lab/Seymour Marine Discovery Center. This center in Santa Cruz has one of the world’s largest whale skeletons, plus guided tours on which you see the lab’s two on-site dolphins. seymourcenter.ucsc.edu

Whale-watching. Humpback and blue whales frequent the bay from May into December; grays from December to April. Outfitters include Monterey Bay Whale Watch (gowhales.com) and Princess Monterey Whale Watching (montereywhalewatching.com).