Yields
Serves 6 as a main course 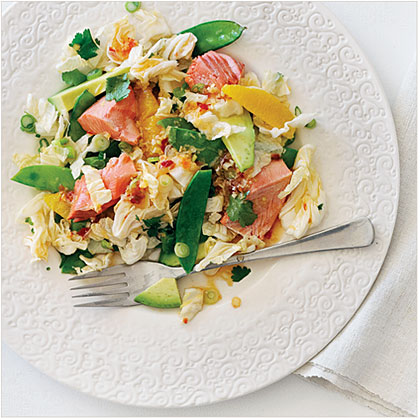 Cook salmon in a large pot of simmering salted water, covered, until just opaque, about 5 minutes. Lift out and let cool.

Cut ends off oranges. Following the curve of the fruit, cut off peel, then cut segments free from membranes by slicing on either side of each membrane.

Pour enough oil into a large pot to come 1/2 in. up sides. Heat over medium-high heat until a deep-fry thermometer registers 360°. Whisk egg with 1 tbsp. water. Brush won tons with egg wash on both sides, then sprinkle generously with sesame seeds. Fry in small batches until golden and puffy. Drain on paper towels and sprinkle with salt to taste.

Toss cabbage, snow peas, oranges (no juice), green onions, and cilantro in a large bowl with two-thirds of dressing. Divide among plates. Remove skin from salmon and scrape off gray layer underneath. Break into 2-in. chunks and arrange, along with avocado slices, on greens. Drizzle both with remaining dressing. Scatter cilantro leaves on top and serve with won ton chips.

Note: Nutritional analysis is per serving.