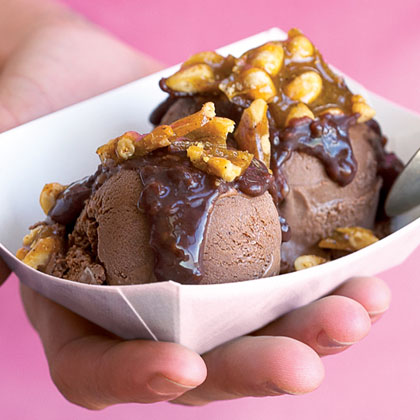 Remove cream mixture from heat and let steep 20 minutes. Meanwhile, put egg yolks, sugar, and salt in the bowl of a standing mixer and whisk at medium-high speed until egg mixture is thick and pale yellow, 2 to 3 minutes.

Return cream mixture to medium heat and bring just to a simmer. Remove from heat and pour through a strainer into a clean bowl; discard cinnamon sticks and vanilla pod. With mixer running on medium speed, pour 1/2 cup cream mixture into egg mixture. Slowly drizzle in remaining cream mixture, continuing to mix as you go.

Pour this custard into saucepan. Return to stove and cook over low to medium-low heat, stirring with a wooden spoon, until custard thickens a bit and reaches 170° on a thermometer.

Pour custard into a bowl and set in an ice bath (a larger bowl of ice and cold water). Let cool, stirring occasionally, 10 minutes. Cover with plastic wrap and chill for at least 1 hour and up to 1 day.

Freeze custard in an ice cream maker according to manufacturer's instructions. Transfer to an airtight plastic container and freeze until hardened, at least 5 hours.