"I always brine chicken, because it seasons it all the way through," says Julia Lee, aka the Fry Queen and a cooking teacher in San Francisco. She likes her chicken seasoned very well; if you prefer it less salty, go for the shorter brining time and smaller amount of salt. 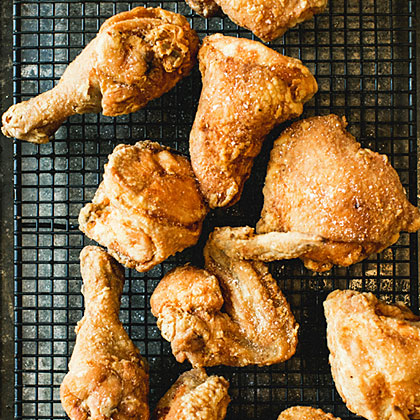 Put 3/4 cup salt, the sugar, and 4 cups cold water into a large bowl and stir to dissolve. Add chicken pieces, cover, and chill 1 to 2 hours.

Drain chicken; pat dry. Pour oil into a heavy 6- to 8-qt. pot. Heat over medium-high heat until oil reaches 375° on a candy or deep-fry thermometer. Reduce heat to medium (oil will stay hot).

Meanwhile, mix flour, baking powder, and pepper in a bowl. Coat chicken in mixture. Let sit 30 minutes; coat again. "The flour gets sticky again, and the second coat will stick to the first," Lee says. "It makes it extra crispy." (You can dredge up to 2 hours before frying.)

Carefully lower chicken into hot oil, working in two batches so the pieces aren't touching. "If you overcrowd the pan, the oil temp gets too low, and you won't get that even, golden crust." Cook chicken until golden brown, 14 to 16 minutes per batch, turning at least once. As you fry, move pieces occasionally, "like they're floating in a bathtub. It keeps them from touching the bottom and forming brown spots." The oil temperature will drop when you add the chicken; adjust the heat to keep it about 350°. Color is one clue to the chicken's doneness, but so is sound. "You'll know it's done when there are fewer bubbles and the frying becomes significantly quieter," says Lee. Also, watch the second batch carefully: "It may cook a bit faster than the first--I often lower the heat."

Set a rack in a baking pan. Using a slotted spoon or spatula, transfer chicken to the rack in a single layer to drain.