How to Design a Pair of Family Cabins Ten years ago, Melissa Milewski drove 80 miles from Portland to Klickitat, Washington, to see a 12-acre parcel of land. Accessed by a winding two-lane highway, the property was thick with wild apple trees, sharp-smelling firs, and giant oaks that practically begged for a rope swing.

“We’ve both always loved the Northwest,” says Melissa, whose husband, Anthony, grew up in nearby Kennewick. He had been raised reeling in salmon and bass from the very river that ran next to the property—the Klickitat. As Melissa puts it, “basically every childhood photo of Anthony with his dad had a fish in it.” The couple had been living abroad and thinking of having kids, yet they were far from putting down roots. The purchase of the land—even though they were years from saving enough to build—was their way of notching out a lasting home base that could later be passed down for generations.

Patience, trust, the ability to solve design issues long-distance: That’s how this family compound came together. Through a series of late-night phone calls over the next two years, Anthony and his father, vocational high school construction- instructor Tony Milewski, crafted the initial footprint of a cabin that eventually evolved into two separate structures. The first, a 1,500-square-foot main house with loft-like elements, would feature a massive fishing workshop and floors of gray poured concrete. The second, a 1,150-square-foot take on a woodsy guest cabin, would be tucked nearby along a rocky trail to the river. Then, three years ago, the father-son team took their plans from drawing to reality. “They framed and enclosed both houses, which I thought was impressive,” says Melissa. “At that point, I realized we needed help.” Building and construction by Heith England, owner of Sustain Interiors. Thus her choice of Phoenix interior designer Jenny Komenda, whom she’d met years before through a mutual friend in New York. Komenda’s skill at layering vintage and contemporary furnishings with color and texture felt particularly suited for a pair of new builds that were aching for hand-me-down character. Simultaneously, she discovered Hood River–based contractor and craftsman Heith England, who shared the Milewskis’ preference for incorporating local and salvaged materials. His addition to the design team brought even more patina into the spaces; floors, beams, and open shelving for the riverside cabin, for example, were crafted out of locally sourced reclaimed wood. Then there were the weathered railroad ties that Melissa tracked down and England repurposed into fireplace mantels in both houses.

Inside, Komenda lined key walls with shiplap and chose deep blues and greens for cabinetry to complement the landscape. In the spirit of a communal camp atmosphere, both houses were treated to cool bunk rooms. The furnishings consisted of mid- century pieces that Komenda juxtaposed with leather sofas, rustic tables, and vintage kilim pillows.

While the cabins may be new, the meaningful process through which they came together has resulted in two character-rich spaces whose stories are just beginning. “Anthony’s dad has grand plans for a treehouse for the boys,” explains Melissa. “He’s been exchanging sketches with them for about two years.” Just as it should be: design that carries over to the next generation. A nod to the industrial-lodge vibe was high on Anthony’s wish list. So for the structure the family refers to as “the shop,” interior designer Jenny Komenda selected a palette of masculine-leaning colors, such as olive and black, and poured-concrete floors that welcome wet feet and fishing equipment from the river. “He wanted it to be a hangout where guests and kids didn’t have to worry about bringing muddy boots inside,” says Komenda. In keeping with a family compound, the dining area is designed to take a beating. An old courthouse bench is mixed with vintage plywood chairs, along with a spacious table designed by Komenda and custom-built from salvaged wood. 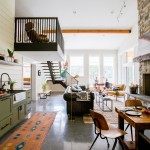 The centerpiece of the floor plan is a custom 11-foot black leather Chesterfield sofa that aligns with a soaring 16-foot fireplace made from natural thin-veneer stone. “Anthony’s vision was to add touches of an English men’s clubhouse,” says Komenda. “But he didn’t want it to be literal, and I think the Chesterfield nails it.” Komenda proposed wrapping the entire common space in shiplap but as a compromise scaled it back to roughly half. She chose a warm gray ($60/gallon) for the finish and kept the look sleek by wrapping the hood in the same material. The forest green ($60/gallon) Shaker-style cabinetry, an ode to iconic fishing cabins, is paired with gray soapstone countertops, a stainless steel apron sink, and matte black hardware. “How can we make a boys’ bathroom moody, cool, and different?” was the question Komenda asked herself. The answer: floor-to- ceiling black subway tile, which is affordable—like white subway tile—“but packs an extra punch,” she says. Because of its proximity to the front door and direct access to the garage, the space multitasks as a mudroom. “We needed a drop zone,” says Komenda, who pulled it off with a long bench and a row of wall hooks opposite the sink. Melissa never cared much for this multi-hued Russian rug until Komenda came along. Inspired by the bold combination of colors in the textile and an adjacent painting, the designer brought other soft elements into the carefully considered bedscape, balancing the mix with natural wood accents. The cabin’s small size called for complementary colors throughout. Komenda chose Narragansett Green ($60/gallon) for the kitchen, a hue just a few shades darker than the walls in the master bedroom. “It feels more modern than the earthy green tones we were going for in the main house,” Komenda explains. The Milewskis wanted to double down on sleepovers in this enviable childhood space. “They were so fun and adventurous,” says Komenda, who worked with England to design the expansive bunks with room for storage. As a finishing touch to the high-impact nook, Komenda installed poppy red sconces to match the Pendleton blankets. “We put tile everywhere so that this room could get completely wet from kids splashing around,” says Komenda. One of the final decor elements came from Anthony and Melissa themselves. The couple had been gathering antiques from their travels overseas, including Soviet Realist art and colorful, eclectic rugs from open-air markets. Melissa sent hundreds of books to fill the guest cabin library. With rows of Shaker-style cabinetry, brass picture-rail light fixtures, and an iron rolling ladder, the built-in bookshelves are a signature design element of Komenda’s—and a major factor in the compound’s timeless sensibility.

Get Perfect Cabin Style with These 10 Decorating Ideas