How to Grow Tomatoes: Tips from the Masters

How to plant, fertilize, and water tomatoes for a great harvest of sweet, juicy fruit 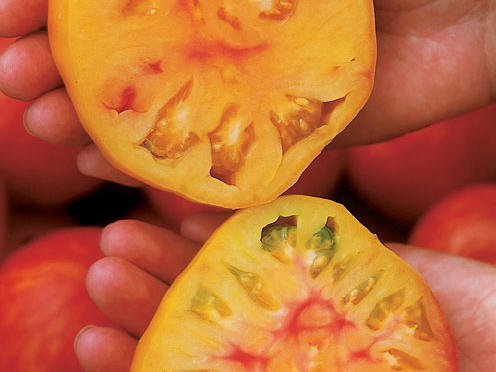 Tomatoes are generally heat-loving plants, some of which tend to grow tall, so give them full sun, rich soil, and a trellis or stake to grow on.

Plant seedlings in the garden after all danger of frost is past, or plant a bit early and protect crops with row covers.

If your soil is rich and well amended with compost, you won’t need to fertilize. But if it’s nutrient-poor, apply controlled-release complete fertilizer once at planting time; if you need to feed the plants later to boost growth, use a relatively mild plant food like fish fertilizer. Too much nitrogen makes plants grow leaves at the expense of fruit.

At Gary Ibsen’s 2005 Carmel TomatoFest in Carmel Valley, California, there were two plates of ‘Early Girl’ tomatoes on the tasting tables. One was among the sweetest, most intensely flavored fruits at the show, while the other – its genetic twin – was an unremarkable also-ran.

What made the difference? It all came down to culture. The unremarkable one was grown conventionally, while the sweet one was dry-farmed (a technique possible only where the ground retains enough moisture to support the plant all season long with no irrigation-like some areas near the Northern California coast, for example). Dry farming has several advantages. It keeps water off the leaves so plants aren’t as susceptible to late blight, it concentrates sugar in the fruit, and it minimizes fruit splitting, which results when late-season irrigation pushes pressure inside the fruit past the breaking point. Among the disadvantages, dry-farmed plants produce fewer, smaller fruits than conventionally grown tomatoes.

Not every gardener can dry-farm, but the lesson is clear: If you can manage to water regularly but sparingly, you’ll get sweeter, split-free fruit. Drip irrigation can help you achieve that.

Though tomato plants can (but don’t usually) encounter many minor problems, there is one major problem that can cost you your whole crop: late blight. Caused by the same organism (Phytophthora infestans) that brought about the 19th-century Irish potato famine, it usually shows up around harvest time, transforming plants and fruit into disgusting blackened waste.

Tomatoes become infected when airborne spores land on wet plants, so your first line of defense is to keep leaves dry: Flood or drip-irrigate your tomatoes and never use an overhead sprinkler. To keep rain off leaves, some gardeners cover their rows with clear plastic tents. Fungicide prevents and controls late blight.

Lessons from the masters

The Chino family has been growing tomatoes near San Diego for decades and sells only directly to consumers and to a few choice (and choosy) restaurants. They grow scores of varieties through the year, all vine-ripened to perfection.

The Chino system for growing tomatoes

• Prepare the soil by tilling 3 inches of well-aged manure into the top 6 inches of soil.

• Plant seedlings in succession at three-week intervals from February through July. Cover earliest plants with sheet plastic stretched over hoops to boost warmth early in the season and prevent frost damage. Remove hoops after night temperatures stay above 50° to 55°.

• Train indeterminate tomatoes up a trellis system (determinate varieties are best raised in cages). The trellis system keeps ripe fruit off the ground, so it’s less susceptible to disease and is easier to harvest. The basic structure is made from 8-foot steel stakes pounded 18 inches into the ground at 4-foot intervals. Horizontal wires fastened to the stakes at 1-foot intervals give the tomato vines support as they grow; polypropylene string secures vines.

• Harvest as soon as tomatoes color up fully. Look for green gel around the seeds. Once it turns clear, the tomato is overripe and flavor diminishes. Pick often: The Chinos harvest at least every other day. Cold degrades tomato flavor, so tear the plants out after nighttime temperatures start dropping below the mid 40s. (This is also a good argument for storing tomatoes on a kitchen counter instead of in your refrigerator’s crisper).

• Rotate your crops. This is the best crop insurance you can have, since many diseases survive in the soil, waiting for you to replant susceptible crops.