The quinoa had to go. It flopped over, dried out, and just looked ready. (Click here for a refresher on quinoa.) The seed packet listed... 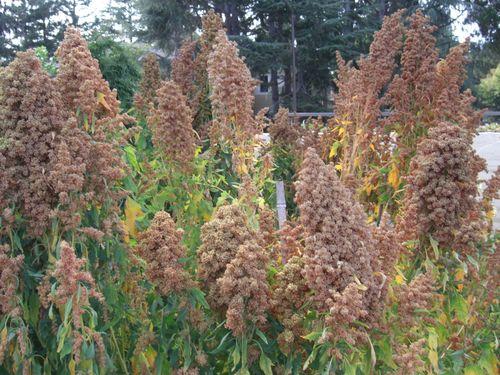 The quinoa had to go. It flopped over, dried out, and just looked ready. (Click here for a refresher on quinoa.) 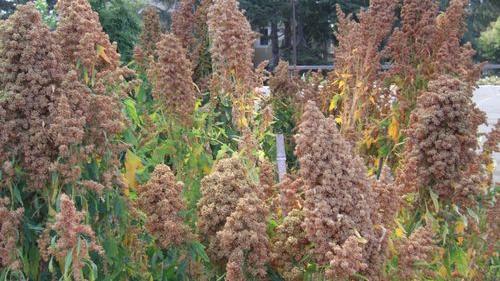 The seed packet listed the days to maturity as 100-110. It had definitely been that long, but I hesitated in harvesting because the seed packet also said not to cut the mature seed heads until after a frost. Did the crop somehow need a frost to fully mature? I called up the pros at Seeds of Change and spoke to Emily. She said thatthe seed packet is a bit misleading — the crop is ready in Septemberor so. Not all climates have a frost by then, so if it’s looking ready,then it probably is. 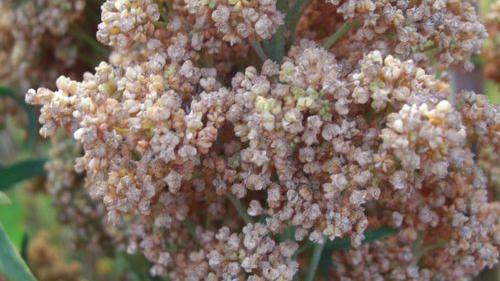 Step one – Cut off all the seed heads 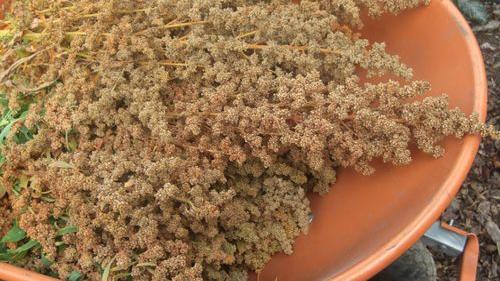 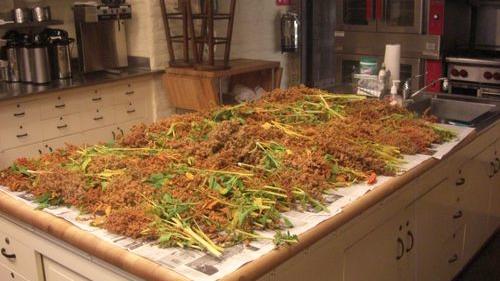 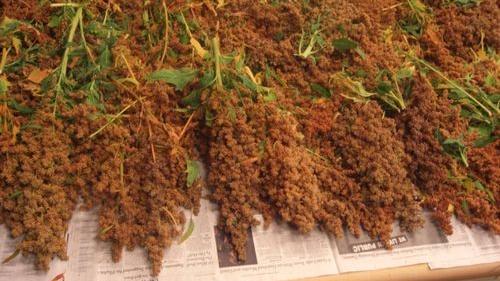 Step three will be threshing. Emily suggests putting on gloves and rubbing the seeds heads together over a bucket.

Step four will be removing the leaf and stem debris from the seeds. Emily sets up a fan and has a container to catch the quinoa. Sounds like a disaster waiting to happen, so I think I’ll probably call her to flush out the details when we get closer to that time.

And the final step will be adequately soaking the seeds to remove the saponin, a tannin that tastes bitter.

More on each step as we get there…

So far I’m totally stoked on growing quinoa. We’re getting far more than I expected. Emily tells people that they’ll get about a cup per plant, and I think her estimate is seeming pretty accurate. We were able to grow 54 plants in a raised bed measuring 4ft. by 8ft. (the plants require spacing of 6-8 inches). It’s a great crop to grow in that it’s super unthirsty (10-12 inches for the entire season), low-maintenance, and stores well for months (a year?). The threshing seems to be the labor intensive part, but I’m excited to do it, and I imagine that anyone growing their own quinoa would probably be up for the challenge.